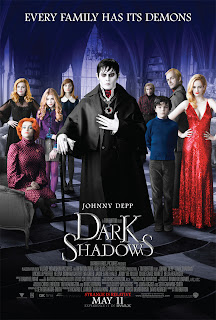 There are doubtlessly several directors capable of turning a campy long-running soap opera into a compelling two-hour movie. Alas, Tim Burton really doesn’t belong on the list. The spooky, kooky auteur may be our most successful oddball visual stylist, but as a storyteller he often tends to lose focus – sometimes pleasantly and sometimes maddeningly – spinning his wheels in wall-to-wall weirdness while the audience waits for him to catch up. He’s a man so in love with his off-kilter visions and thematic obsessions (Eccentric outsiders! Crazy family dynamics! Daddy issues!) that he needs a strong, well-structured script – such as Ed Wood or Sweeney Todd: The Demon Barber of Fleet Street - to keep him on track.

Based on the on-screen evidence, Dark Shadows is one of the worst screenplays he’s ever been saddled with. A misguided adaptation of the popular supernatural soap, which ran from 1966 to 1971 on ABC, the film sees Burton utterly adrift in a pitiless sea of pointless subplots, under-developed characters, inexplicable twists and beyond-dumb dead-pan comedy. Obviously, that the picture looks like a million bucks – okay, make that $150 million bucks – is a given. Unfortunately, all the elaborate creepy-cool gothic eye candy, quirky snark and Depp-ian lunacy comes at a punishing cost: your patience. 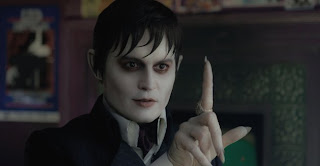 The movie opens in the mid-1700s, as the well-to-do Collins clan make the pilgrimage from Liverpool to a small ocean-side town in the New World (which will eventually become Maine, Rhode Island), establishing the flourishing fishing port of Collinsport and a luxurious mansion dubbed Collinwood Manor. Flush with money and potential, the family’s fortunes nonetheless take a turn for the grim when young son Barnabus (Johnny Depp) begins canoodling with sexy maid Angelique (Eva Green), only to dump her for upper-class beauty Josette DuPres (Bella Heathcote). Revealing herself to be a witch, the heartbroken help conjures up tragic early ends for Josette and Ma and Pa Collins, and curses her former lover with vampirism, leaving him forever confined to an inescapable coffin prison deep underground.

Fast forward to 1972. Collinswood Manor has fallen into musty disrepair, occupied only by high-maintenance clan matriarch Elizabeth (Michelle Pfeiffer), her rebellious daughter Carolyn (Chloe Grace Moretz), screw-up brother Roger (Jonny Lee Miller) and his allegedly ghost-plagued son David (Gulliver McGrath), boozy psychiatrist Dr. Julia Hoffman (Helena Bonham Carter) and witless groundskeeper Willie Loomis (Jackie Earle Haley). Worse, the family’s lucrative port has been conquered by the iron-fisted, immortal Angelique, who has become a major power player. However, two unexpected visitors to the area soon begin to inspire change in the town and its hierarchy; Victoria Winters (Heathcote, in a dual role), an aspiring young governess with a mysterious past, and a freed Barnabus, ready to settle the score with the spiteful spell-caster and restore the Collins’s proud name to its former luster. 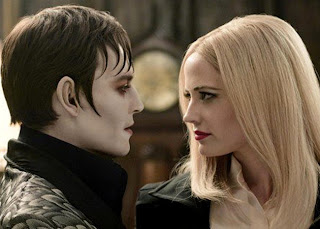 Of course, that’s basically just the set-up for the film, which doesn’t so much follow a coherent narrative line as bounce around willy-nilly like a gremlin in a toy store, albeit with infinitely less energy. The script, by Seth Grahame-Smith (author and screenwriter of Abraham Lincoln: Vampire Hunter. Yes.), with a story credit by John August (Big Fish, Corpse Bride), bites off more than it can chew, mashing multiple plotlines together into a confused muddle. Whereas a cleaner screenplay might have lasered in predominantly on the Barnabus/Angelique rivalry – which here just rears its head every now and again, without urgency or momentum – Dark Shadows covers so much terrain that each of the narrative threads feel undernourished, with most wrapping up on unsatisfying notes. What to make of Helena Bonham Carter’s shrink, who grabs a fair amount of screen time for no other reason than to set up a sequel? Or Heathcotes’s character, introduced as a potential aid for David and (unconvincing) romantic interest for Barnabus, who disappears from the story for what feels like an hour? And a shiny nickel to anyone who sees the head-scratching resolution of Moretz’s sullen teen’s arc coming. 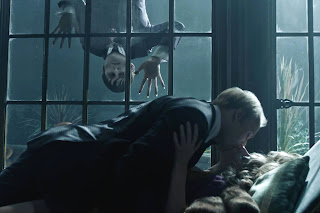 Usually Burton can be counted on to inject brilliantly twisted life into a saggy story (Batman Returns and Mars Attacks! spring to mind), yet here he seems completely at a loss to give the material a pulse. Instead, Dark Shadows plods joylessly through its extended passages of hoary soap opera dialogue and weightless melodrama, punctuated occasionally by soggy fish-out-of-water gags and sexual innuendos. The helmer does manage to create some lovely sequences of eerie splendour, such as a visit from a chandelier-climbing apparition or an intense cliff-top encounter, although these moments never add up to anything interesting. They’re merely distractions from the crushing tedium that plagues the first two acts. As for the jarring finale, well, it feels like Burton throwing up his hands in frustration and ripping off both his own Beetlejuice and Robert Zemeckis’s Death Becomes Her to dire, lethargic effect (regardless of how hauntingly lovely Green’s porcelain-cracked visage looks).


Fault can’t be laid at the feet of the game cast, who do good-to-great work with uninteresting characters. Depp, who was a key problem with Burton’s Alice in Wonderland and Charlie and the Chocolate Factory, cheekily disappears under the mountains of latex and restrictive clothing, giving Barnabus an amusingly dim dignity; he’s seems to have suffered a bit of mental decay during his long slumber. He’s also a great reactor, always visibly perplexed by his insane relatives. The unbearably gorgeous Green is a perfect match for him, imbuing Angelique with a wolf-like smile, predatory sexuality and cartoonishly broad American accent. Moretz dusts off her winning Kick-Ass Hit Girl sneer, and Haley – among the most exciting supporting players working today – earns a few smiles in a role that’s barely a role. As for Pfeiffer, Miller, Bonham Carter, Heathcote and special guest Alice Cooper, they’re pleasant enough, but, thanks to their truncated parts, don’t exactly leave a lasting impression. 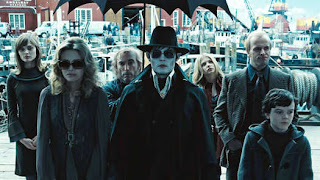 In many ways, the picture is reminiscent of the costly, and equally strange, Will Ferrell-led Land of the Lost remake. Like that inexplicable dud, this movie disappears into the off-putting peculiarities of its bizarro universe, and abandons any ambition to connect with audiences not intimately familiar with the original show. It’s a disappointing misstep for the fairly consistent Burton, whose filmography previously had only a single truly egregious loser in 2001’s Planet of the Apes. Now he has a second. Dark Shadows is one dusty property he probably would have been wiser to have left buried.

*Originally printed at Converge Magazine.
Posted by Cam Smith at 2:24 AM