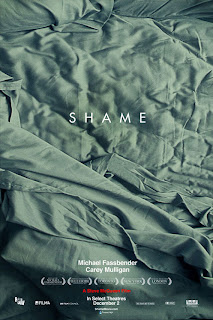 When we first meet Brandon, the haunted sex addict played by Michael Fassbender in British director Steve McQueen’s potent second effort, Shame, he resembles a living corpse. Impassive, alone and spent, he lies silently in bed staring at the ceiling above, vacant eyes registering only exhaustion and crushing boredom. He might as well be gazing into the dark reaches of his own broken soul. Subsisting on an obsessive daily diet of mechanical casual sex with prostitutes, masturbation and internet pornography, Brandon’s like a tragic modern day vampire; devoid of feeling or vitality, living simply to unenthusiastically feed his own base compulsions.

Like all serious addicts, Brandon’s devastating sickness has begun to infect the normal aspects of his existence as well. Although he holds a lucrative job at a generic Wall Street office, his suspiciously virus-plagued work computer, and penchant for consistently arriving late, has started to grab the snaky attention of his boss – and singles club wingman – David (James Badge Dale – unrepentantly odious). Even worse, his expensive, sterile New York apartment has been invaded by long-absent younger sibling Sissy (Carey Mulligan), a clingy, damaged basket-case whose fragile wrists are alarming roadmaps of deep psychological anguish. The reappearance of his sister – and her ensuing improper relationship with David – opens excruciating, unspoken wounds for Brandon, further propelling his self-loathing tailspin into excess, and forcing him to face the suffocating torments of his past.

For McQueen, Shame is an extremely fitting follow-up to his great 2008 debut Hunger, which, in often excruciating detail, portrayed the grim fate of Bobby Sands, the republican inmate leader of Ireland’s infamous 1981 prison hunger strike. Whereas that movie featured a protagonist – also played by Fassbender – strictly denying himself all temptations, this new film veers boldly in the polar opposite direction, showing us a man who dives headfirst into them and refuses to come up for air. There’s a fearlessness to Shame’s depiction of sex addiction that’s coldly effective; McQueen fills his picture with countless scenes of graphic sexuality and nudity, but drains them of any sense of eroticism or passion. After the initial shock wears off, we’re slowly drawn into Brandon’s headspace, greeting each ensuing perfunctory sexual encounter with an increased sense of detached apathy. The film doesn’t titillate, it numbs.

As overwhelmingly unpleasant as the picture gets, the director - who has a prominent background as a visual artist - once again proves to have an magnificent ability to transform revolting human misery into breathtaking passages of pure cinema. Among its many wonders, Shame contains two extended dialogue-free sequences, set to Harry Escott’s gloomy, ominous tick-tock score, that are astonishing visual poetry. The first, which occurs early on, sees Brandon seducing a lovely commuter on a subway train with little more than a strong, unremitting gaze. As the tension builds, the film cuts away to random explicit excerpts of his regular routines, providing us, in just a few absorbing minutes, with both a vivid layout of the character’s world and his no-nonsense approach to seduction. The second follows Brandon on a night-time prowl around the city on a ravenous, self-destructive hunt for gratification and – he hopes – a much-longed-for moment of peace. It’s a heartbreaking bit of filmmaking. 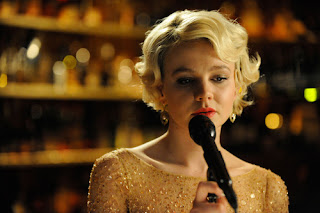 Just as in Hunger, there’s repeated use of long single-shot takes in order to draw out the complexities of the characters. During the film, Brandon goes out on a date with an attractive co-worker, played by Nicole Beharie, and, in their real-time verbal, and sensual, interactions, we’re given first-hand witness to the debilitating effects of his affliction. For him, sex is no longer (if it ever was) about intimacy or a profound human connection. Instead, it’s been distorted into a selfish act of personal satisfaction, with women acting merely as a prospective fuel source. Equality has been erased from the equation entirely. Despite rarely being without female companionship, he’s never anything but utterly alone.

Michael Fassbender continues to warrant recognition as one of our most courageous and exciting up-and-coming actors. Most will know him best for his commanding performance as the iconic villain Magneto in last summer’s X-Men: First Class. However, it’s his smaller efforts – playing Sands in Hunger, or an incestuous step-father in 2009’s Fish Tank – that reveal the murky depths he’s willing to travel to in order to serve an artistic vision. There’s no ego or artifice in his performances, only steadfast dedication. Here, he performs numerous scenes fully nude, exudes raw animal magnetism, and doesn’t shy away from appearing grotesque or unlikeable. He has a fantastically disturbing moment with Mulligan where he playfully leaps on top of her, and transitions into a frenzied madman so instantaneously that the audience sucks in its breath in discomfort. Brandon may be something of a monster, but with Fassbender inhabiting his uncomfortable skin, he’s a fascinatingly complex one, who wholly involves us in his pitiful, wrenching journey. 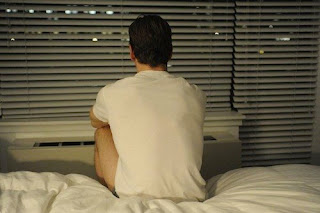 Certainly, this is primarily Fassbender’s show, but apparently no one told Carey Mulligan, who delivers an extremely juicy supporting turn. Following her co-star’s committed example, she makes Sissy into a compellingly ravaged portrait of barely suppressed misery. Her biggest showcase scene comes in the form of an extended musical performance, where her character – a struggling nightclub singer – performs “New York, New York” with all the starry-eyed optimism of a retired streetwalker. While Mulligan has a knack for playing vulnerable, she’s never really been called on to be this pathetic or irritating before. We immediately realize why she’s such a toxic factor in Brandon’s life, but still yearn to grasp the trauma that so thoroughly shattered her.

Shame is – to state the obvious – not a film for every viewer. It’s grueling and aching, filled with unforgettable images of emotional and moral decay, with precious little relief. McQueen has crafted an important picture that transcends the sensationalistic “controversial” tag some will slap it with, and offers thoughtful, provocative insight into the nature of sex, addiction and oppressive long-term guilt. After all, individuals like Brandon do exist. And this picture helps us, if only a little, to understand their pain.