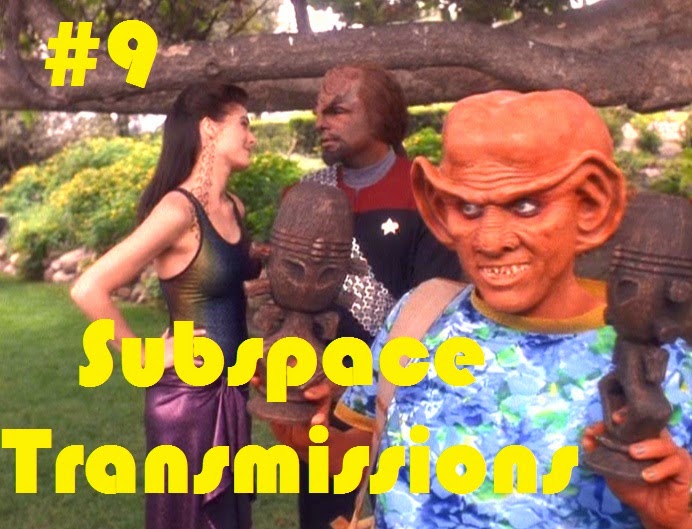 When you're a hard-working member of Starfleet sometimes you just gotta get away from it all. Fortunately, ever tireless hosts Cam Smith, Benjamin Yong and Tyler Orton don't believe in downtime and are ready at your service, this time calling out the finest and direst episodes involving leisure activities in the 23rd and 24th century. Wanna know how the trio feel about pleasure planets? This is the ticket, baby! They also chime in on the dubious appeal of Ten Forward and contemplate the alcohol level of synthale. Let the good times roll!

Or, head over to the iTunes store and subscribe to the show!﻿

Send any questions or comments to subspacetransmissionspod@gmail.com
Posted by Cam Smith at 7:41 PM No comments: 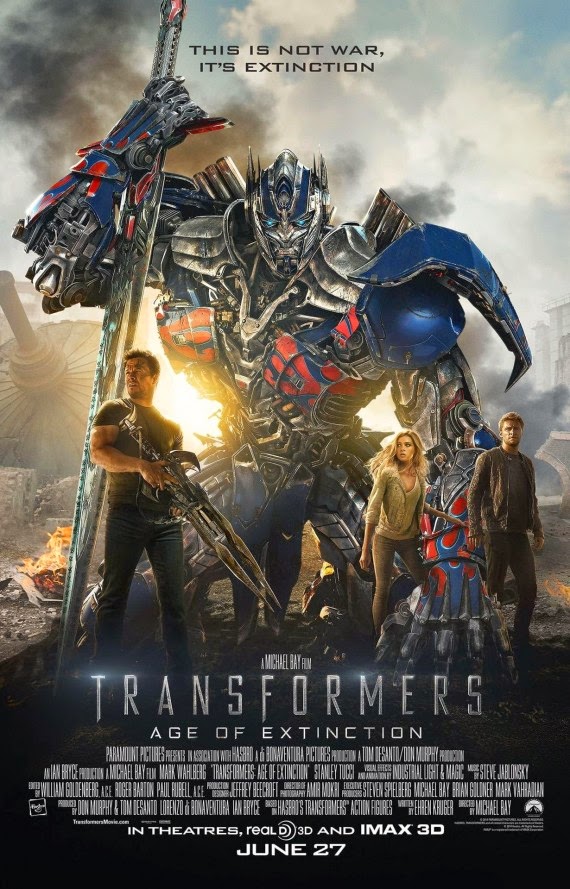 The continued global success of Michael Bay’s Transformers franchise says many damning things about our culture, and its ever-lowering bar for what passes as adequate entertainment. However, what it really highlights is the lack of moral outrage in this generation of mothers and fathers. Back in 1990, when Teenage Mutant Ninja Turtles stormed the silver screen, parents groups were up in arms over that hit movie’s realistic depictions of half-shelled ass-kicking. So effective were their ensuing protests and vocal disapproval that each consecutive sequel increasingly toned down the violence and brightened up the color palette in order to not scar the impressionable little ones.

By comparison, the Transformers pictures are beginning to feel like an elaborate in-joke designed to test just how much sadism, cruelty and antisocial anger can be injected into one bloated toy commercial. Take Age of Extinction, the latest gasping junker to roll off the Hasbro/Paramount assembly line; the film opens with the fiery genocide of countless terrified dinosaurs before seguing into a sequence in which proud Autobot Ratchet is viciously torn limb from limb and impaled while pleading for his life, repeatedly wailing “I am your friend! I am you friend!” Sure, this sort of casually mean-spirited stuff is par for the course in this soul-blackening series – remember in 2009’s Revenge of the Fallen when heroic Optimus Prime screamed “Give me your face!” while savagely disfiguring his critically weakened foe? – but shouldn’t there at least be some serious debate about projecting this trash in front of the impressionable eyes of millions of kids? I know, I know, they’re just robots and it’s “fun.” Sigh. Okay, moving on… 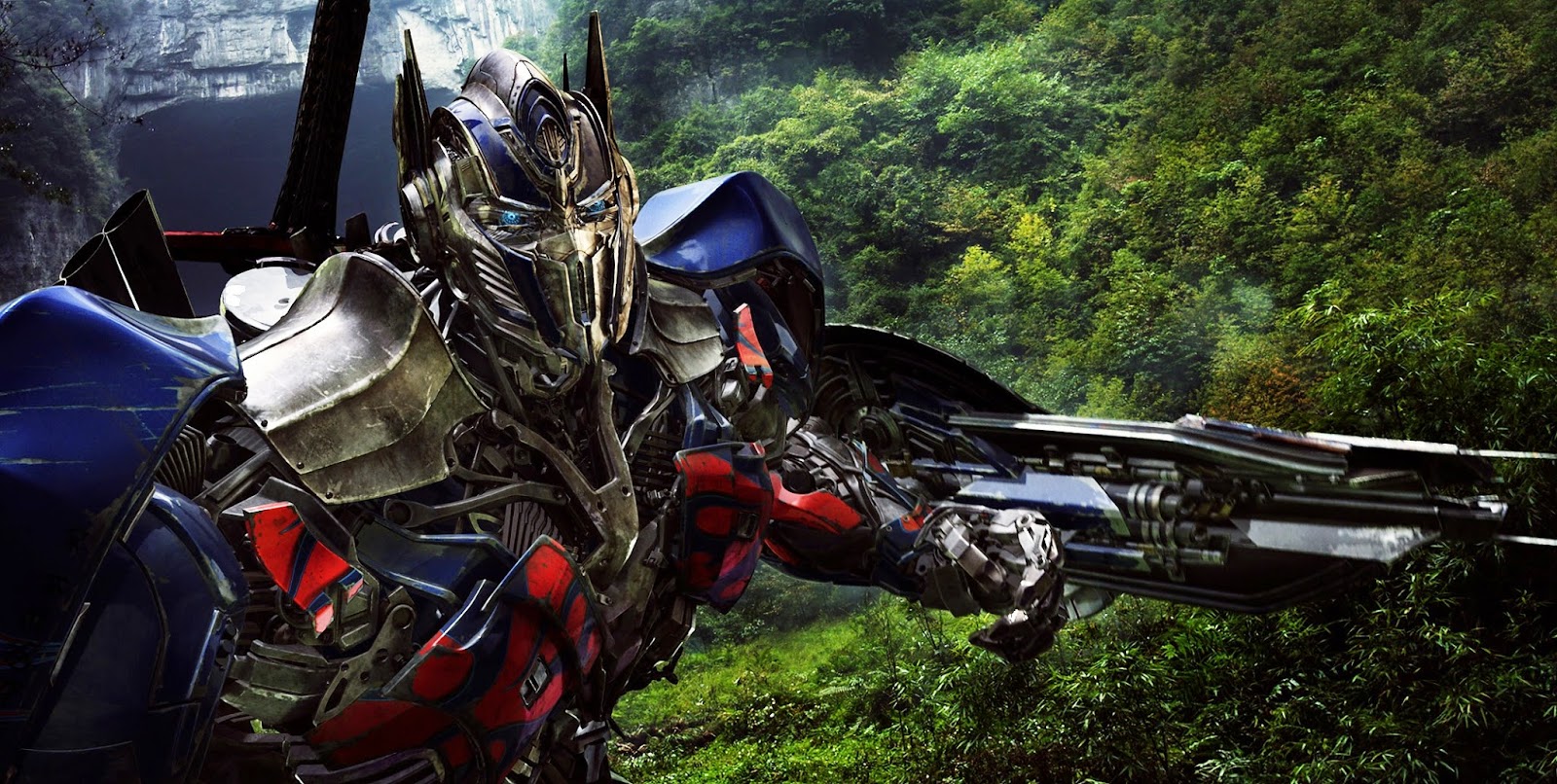 Look, at this point, if you’ve seen one Transformers movie, you’ve seen ‘em all, and Age of Extinction isn’t much different from the rest of the bunch. Despite losing the entire previous cast, and adding a trio of mechanical dinos to the team, this latest addition pretty much mirrors the experience of sitting through the previous three. The action is still overwrought, numbing and relentless, the plot dumb and seemingly made up on the spot and the characters obnoxious and paper-thin. This won’t be the film to convert new fans or offend diehards. It does test endurance levels the most, though; at 165 minutes it’s by far the lengthiest pilgrimage into the distorted, product placement-obsessed (and possibly sociopathic) mind of director Michael Bay. Depending on your view, this will come as a dire warning or a hearty recommendation.

Following the aforementioned mass dino-butchering - which establishes that it was actually aliens that caused the famed mass extinction event and not asteroids or comets - this fourth chapter in the Transformers saga picks up with a rogue CIA death squad, overseen by Kelsey Grammer’s Harold Attinger, wiping out Autobots as penance for the destruction of Chicago in Dark of the Moon. Employing the gun-faced Decepticon Lockdown, the group are harvesting tech, weapons and precious “transformium” (an intentional one-upping of Avatar’s unobtainium?) from the bodies of deceased ‘bots, most notably the villainous Megatron, in order to strengthen American defenses against extraterrestrial attacks. Of course, it goes without saying that Lockdown has ulterior motives for enlisting in the cause, and they predominantly swirl around the vanished Autobot leader Optimus Prime. 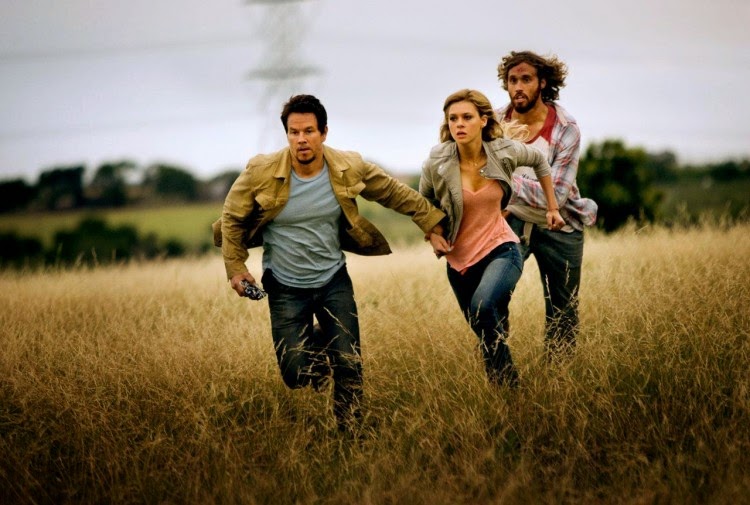 Dormant and gathering dust for years in a dilapidated movie theater (never mind how he got in there), the gravel-voiced alpha-bot is discovered by financially-strapped Texas inventor Cade Yeager (Mark Wahlberg), and transported back to his homey farmhouse for tinkering. Unfortunately for Cade and his scantily-dressed teenage daughter Tessa (Nicola Peltz), trouble comes-a-calling when the reactivation of Optimus draws swarms of murderous CIA goons out of the woodwork, forcing them to go on the run, accompanied by Tessa’s secret boyfriend Shane (Jack Reynor) and a small handful of surviving Autobots. Relentlessly pursued, our squabbling heroes soon come into contact with Stanley Tucci’s flamboyant Joshua Joyce, a Steve Jobs-ian blowhard genius who is creating an army of man-made Transformers and winds up possessing an alien device that threatens to transform our precious planet into a big 'ol smoking crater.

As has traditionally been the case, the script, by indefensible returning writer Ehren Kruger, is merely a shambles crudely tying together pre-visualized action sequences. There’s little logic connecting each plot point – it’s not very clear, for example, what Wahlberg hopes to accomplish by crashing Tucci’s tech company – and more of a casual attitude of indifference towards pesky things like character arcs, motivation and consistency of personalities. Every so often, blatantly obvious storytelling patches (a bizarre cell phone discussion between Cade and Joyce reeks of desperate last minute tinkering) rear their heads, but most of the time Kruger and Bay are content to let the never-ending explosions and chaos further the narrative. Which, as far as this property goes, is just fine. The sound of concussive pyrotechnics is infinitely more pleasing to the ear than the wretched dialogue. 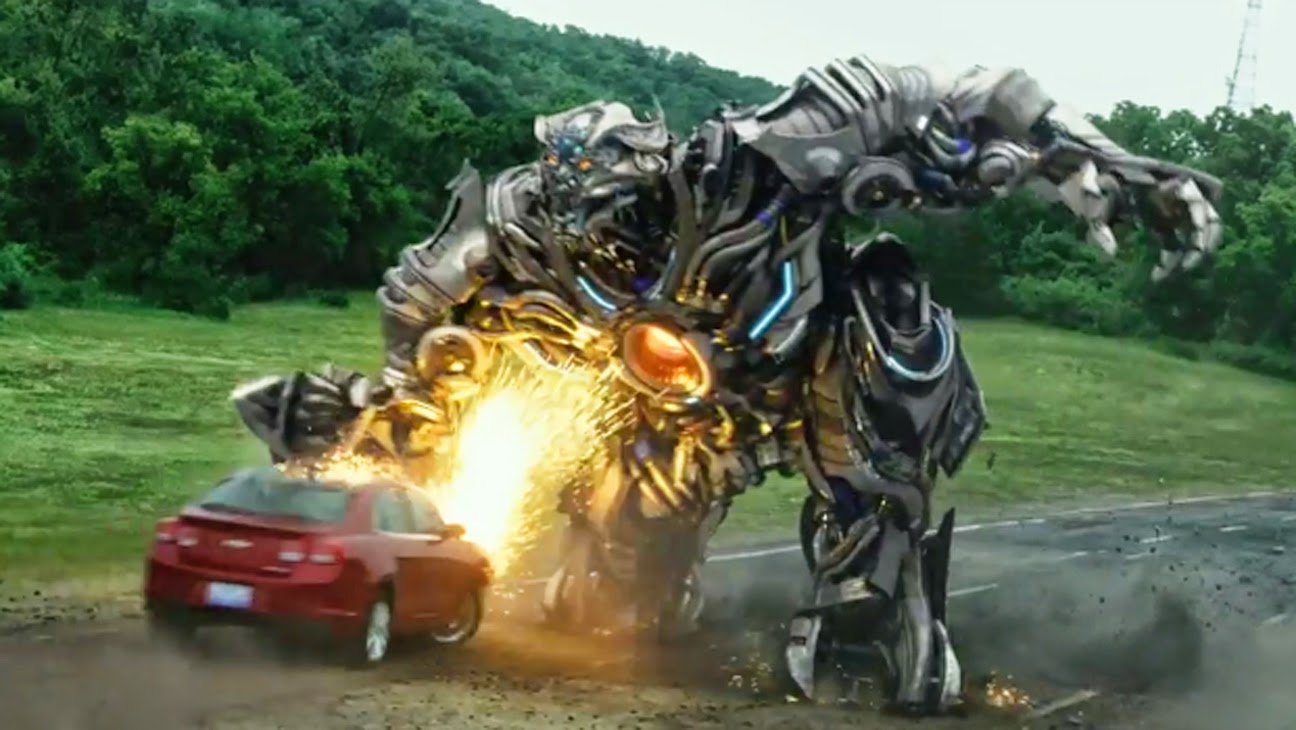 Curse his hacky sensibilities all you want, it’s impossible to ignore Michael Bay’s proficiency for setting up cool effects shots. Alas, he seems to be pretty checked out here – there’s nothing to top the climactic city-toppling battle in Dark of the Moon – and doesn’t imbue the movie with his usual level of memorable weirdness (no sulky Megatron wearing a cape or Robot Heaven this time around). While it’s impossible to argue that he fails to create plenty of cataclysmic eye-candy, exhilaration or energy are noticeably absent, leaving only serviceable dutifulness. Let’s put it this way; there’s more excitement and innovation in Captain America: Winter Soldier’s hostage-freeing opener than in the entirety of Age of Extinction. And that film didn’t have (much ballyhooed, yet lamely wasted) Dinobots!

Although the helmer can do action in his sleep, he can’t pull off self-aware meta humor on his best day. A scene where an elderly character scorns modern-day Hollywood for only cranking out remakes and sequels, before fawning nostalgically over a poster of Howard Hawks’ El Dorado – a loose redo of that cinematic master’s own 1959 classic western Rio Bravo – is pretty embarrassing. Is he trying to argue that things haven’t really changed at all? His intention isn’t quite clear, and only succeeds in emphasizing the gaping gulf in quality between Hawks’ retold tales and his own. Equally head-scratching is an icky scene wherein he acknowledges his own (boringly) repulsive misogyny by having Cade sternly criticize his daughter’s ultra-short cutoffs for being inappropriate while the camera performs a long, leering cinematic proctology exam. Admitting the problem is only step one, Mr. Bay.

It must be a bit of a blessing and a curse to star in one of these vehicles. On one hand, you’ve got a guaranteed box office smash on your resume, while on the other there’s a darn good chance you’ll be delivering your very worst work. Such is the case with this cast, who often have to spit out their unspeakable lines at a staccato beat in order for it to complement the editing. Credit where it’s due, Shia LaBeouf had this dubious technique down cold. Wahlberg does not, and his inventor – an apparent graduate from the “Dr. Christmas Jones Institute of teh Science and Technologies” – is pretty much a blank, enlivened only by being flanked by pretty deadweights Reynor and Peltz. Not surprisingly, Tucci and Grammer are the only two who seem to be enjoying themselves, well aware that they might as well embrace the opportunity to go whole-hog camp. As the voice of Optimus, Peter Cullen adds a touch of class, despite spending most of his screentime threatening to kill everyone before delivering another patented film-closing nonsensical monologue (always my favorite part). 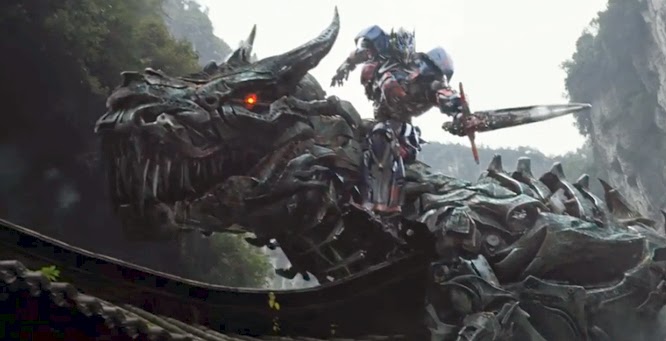 Predictably, the picture closes on an ominous cliffhanger ending paving the way for a fifth and (*gulp*) likely sixth Transformers adventure. It’s too late to pray for change; the worst blockbuster franchise going will continue to cough out new content so long as the bucks keep rolling in. Age of Extinction isn’t the nadir of the franchise, nor does it cast a single ray of hope that Bay and crew will course-correct and produce an installment that develops the intellectual property in an interesting or novel way. The robots may be in disguise, however the filmmakers' intentions couldn’t be any more naked. See you again in Summer 2016. Bring the kids.