About That INDEPENDENCE DAY Sequel Buzz... 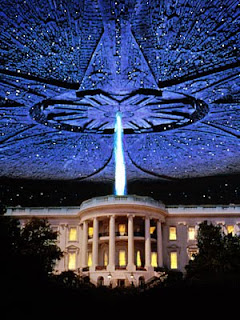 Last weekend the world as we know it ended to thunderous applause as Roland Emmerich’s 2012 decimated the competition, proving once and for all that there are few sights movie-goers desire to witness more than the complete and utter annihilation of mankind’s proudest architectural achievements. (“Take that Sistine Chapel!” “Up yours Washington Monument!” “See you in Hell Eiffel Tower!!!”) And, for the most part, I shared their cackling, borderline-sadistic glee, as who doesn’t love a good fromage-scented Disaster Movie epic, replete with cartoonishly broad stereotypes, vividly rendered, huge-scale destruction, sudsy soap opera storytelling and ludicrous manufactured peril?

The answer appears to be precious few, considering that 2012 opened with a colossal bang, accumulating an impressive $65-million domestically and even more impressive $120 million in foreign ticket sales, practically paying off the flick’s considerable price-tag in a mere three days. Not too shabby, especially considering that it’s the latest work from a notoriously inconsistent director still valiantly attempting to fight his way back to the level of glory and power he held in his pre-Godzilla hey-day...

For the rest of this article, visit:
http://itsjustmovies.com/about-that-independence-day-sequel/
Posted by Cam Smith at 12:07 AM No comments: 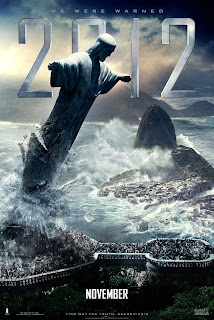 Does anyone else remember those petrifying Time-Life commercials that used to run in the late eighties? The ones attempting to hock expensive, oversize coffee-table books and videos about the Mayan civilization by using apocalyptic imagery of lava-spewing volcanoes and cracked land masses while an ominous booming narrator sternly warned, with alarming relish, that the world would come to an end on December 21st, 2012 *Insert deafening thunder-crack here*?

When I was about 9-years-old, myself and my younger sister Janine stumbled across one of those sanity-shaking ads one evening at my Grandparents whi

le searching the dial for an episode of Dog House or Deke Wilson’s Mini-Mysteries. Needless to say, our initial transfixion, gazing wide-eyed at the unsettling cataclysmic visions and absorbing the bombastic chanting choir-from-Hell soundtrack, quickly turned to teary-eyed anxiety attacks, fretful nausea and more than a couple sleepless nights for the entire family. 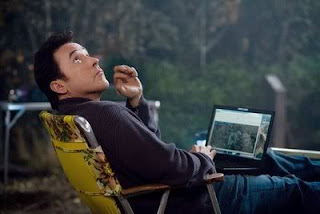 Disaster” Emmerich’s 2012 - a CG-slathered exploitative attempt to play upon the infomercial-fuelled Armageddon-apprehensions of saps like me – prepared to have my worst childhood fears realized for 158 long minutes (!). And indeed, the film’s early shots, scored to Harald Kloser and Thomas Wander’s low, seat-rumbling score and depicting our spherical, blue homeland lining up portentously with the surrounding planets, seemed to set the stage for a traumatic personal déjà vu experience to take place.

But as soon as Chiwetel Ejiofor’s determined scientist Adrian Helmsley strode confidently onto the screen, demanding answers for the global-warming epidemic 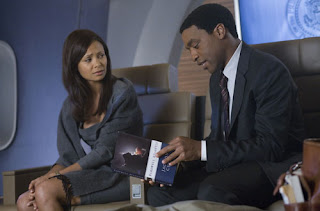 from a sweaty colleague played by Jimi Mistry, I relaxed entirely. For, in wide-grinning, goofy spirit, 2012 is nothing if not a through and through spiritual cousin to Emmerich’s previous smash-the-Earth spectacles The Day After Tomorrow, Godzilla and Independence Day; a super-sized cheese-ball epic where the wobbly dialogue and performances are infinitely more tragic than any amount of catastrophic carnage on screen. 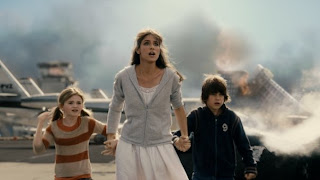 es cartoon, but rather energy particles originating from the sun – which causes rapid crust heating and plate destabilization) we’re left with an intentionally diverse, broadly-sketched group of survivors who must undergo soap opera-style character arcs while racing to safety or, more often than not, their own grim demises. Each of these deaths can usually be telegraphed, in typical Disaster Movie style, by separating those who are pure-of-heart and have precocious young children and/or prospects for future importance from those who are just along for the ride. 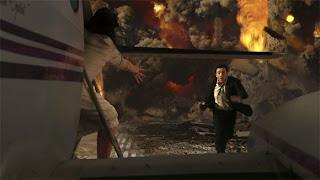 Movies of this genre have never been known for their rich characterizations, but the better ones – Independence 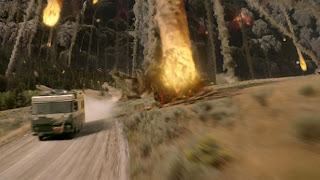 Day included – intentionally chose larger-than-life charismatic actors to fill in the blanks and inspire an effective, if completely hollow, emotional connection. 2012 is noticeably deficient of these strong A-type personalities, with only Cusack, Platt, McCarthy and Ejiofor – a masterful actor capable of delivering even the most awful verbal swill with complete, authoritative conviction – managing to create any real impression amidst the computer-driven effects surplus.

Obviously the effects are the true star of the film and they are certainly sensational – for the first half of the film. Cusack and co.’s limo escape from the fissure 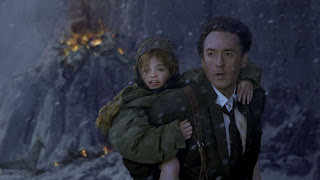 cracked streets of L.A., where houses crumple like gingerbread and cars slide into the yawning abyss, is among the year’s greatest technical achievements. There’s an ugly magnificence to Emmerich’s devastation and one white-knuckle moment, in which a plane takes off from a collapsing runway and soars through a disintegrating office building – you can even see little people clinging to tables – is jaw-droppingly astounding. Unfortunately, the pandemonium grows a tad stale midway through, when the action leaves the U.S.A. and the environments become murkier and more indistinct and a tacked on Poseidon Adventure finale takes over, that is, considering what’s preceded it, a bit of a yawner.

2012 by no means qualifies as a “good film”; it’s too long, stuffed stupid with hoary speeches about humanity and the meaning of existence, and often disturbingly cynical (especially in portraying the unceremonious, cruel deaths of two heroic ch

aracters). Yet, as a messy big-screen, big sound experience, it’s strangely engaging. Few filmmakers are working on as gleefully gargantuan a scale as the German Auteur of Annihilation, and he proves once again that no one grasps the earnest ludicrousness and Rah-Rah! camp of the Irwin Allen 1970’s Disaster blockbusters quite like he does. It may be the end of the world as we know it but, with Emmerich in charge of conducting the chaos, I feel just fine. 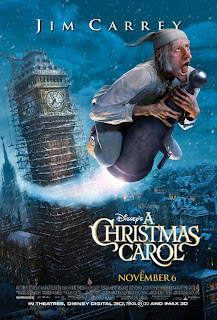 Hard to believe, but it’s been almost a decade since Robert Zemeckis, the tech-whiz mastermind behind whimsical popcorn confections like Forrest Gump, Contact, Romancing the Stone, Who Framed Roger Rabbit and the Back to the Future series, has made a film with flesh-and-blood humans on-screen. No, rather, the Oscar-winning director has been toiling in his secret equipment-packed lair, like a classic Universal Horror mad scientist, concocting crazy experiments utilizing motion-capture technology. The process, wherein an actor’s recorded movements are translated into 1s and 0s and pasted onto a computer-generated character, has been hit or miss and inspired rigorous debate over whether the talented auteur’s determined vision is misguided and Quixotic or legitimately important and revolutionary.
Phase 1 of Zemeckis’ mo-cap trials led to the unpleasantly synthetic The Polar Express, an adaptation of Chris Van Allsburg’s beloved picture book, which mistook stomach- 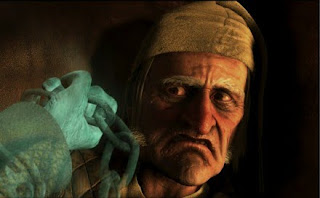 churning rollercoaster rides and creepy vacant-eyed children for fanciful holiday fun. However, despite its considerable narrative failings, the movie was a box-office smash, which, of course, led to Phase 2: Beowulf, a balls-to-the-wall take on the classic medieval poem. That hearty picture, while uneven and a mite unfocused in the mid-sections, was saved by the director’s aptitude for outlandish, demented violence and show-stopping images (Who can forget the ambitious dragon battle and even more epic naked CG Angelina Jolie?).
Now, to bring things full circle, the director has returned to the yuletide season for inspiration with the Jim Carrey- 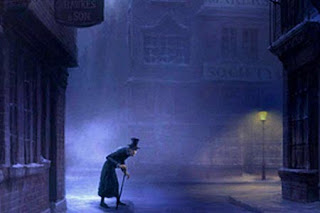 headlining A Christmas Carol, a visually striking tribute to Charles Dickens’ 1843 novella, which is surprisingly faithful in both look and vernacular to the original work’s chilly Victorian origins. Make no mistake, despite the Disney-approved family-friendly marketing push, this is a bleak and frightening film, destined to haunt the dreams of sensitive children for many, many winter nights to come.
The story feels almost as old as time itself, what with the already voluminous cornucopia of existing film translations – The Muppet Christmas Carol, Mickey’s Christmas Carol an

d the1951 Alistair Sim-starring version being my personal faves - absorbed into our collective consciousness, so we all know precisely what eerie events await wicked ol’ Ebenezer Scrooge (Carrey) on Christmas eve. Visited by the ghostly form of his deceased partner Jacob Marley (Gary Oldman), and three fateful spirits (all voiced by Carrey), the bitter grouch is taken on a journey into his own history and impending fate, as well as into the lives of his mistreated assistant Bob Cratchit (Oldman again) and jovial nephew Fred (Colin Firth). What happens from there, I leave for you to fill in the blanks. But you can take comfort in knowing that precocious Tiny Tim (Oldman yet once more) does, indeed, merrily declare “God bless us, everyone!”
Yet, despite the reputation and influence of its forebears, this 2009 film version stands confidently on its own two sp

indly legs, bravely driving its narrative into refreshingly gloomy places. This Scrooge isn’t quite as comically exaggerated as those we’ve seen before; a sinister stooped-over wraith-like man, who, as the film opens, greedily snatches the coins from the eyes of Marley’s rigid corpse. As imposingly embodied by Carrey, this Ebenezer is a true personification of ugliness, all insect-like sharp angles, who fully deserves every moment of torment he undergoes.
Thankfully, his suffering is made bearable for the audience by the rich, magnificent artistry of the film’s animation team, who have exhaustively recreated the crumbling co

bblestones and pointed spires of early nineteenth century London. As well, they’ve given each supernatural encounter its own distinctive horrific mood. The appearance of Marley’s apparition is an anxiety-tingling exercise in cold, sweaty dread, full of heavy, clanking chains and decaying body parts, while Scrooge’s flights over the gloomy cityscape with the ghosts of Christmas Past and Present are exhilarating feasts for the eyes. Only the Ghost of Christmas Yet to Come underwhelms, with Scrooge’s wrenching descent into hell delayed in favour of a silly and unnecessarily long chase scene.
In fact, the director is so intent on revelling in the mournful and macabre that he tends to short-change the emotion of h

is protagonist’s gradually unearthed humanity. Flashbacks to Scrooge’s youth are merely touched upon, with treasured figures like Fezziwig (Bob Hoskins) and his former beloved Belle (Robin Wright Penn) merely touched upon. Only the muted hopefulness of the Cratchit household really connects, mostly due to Gary Oldman’s sensitive and compassionate performance work.
Although there is still considerable ground to cover in regards to mo-cap filmmaking – aside from Scrooge, most of the characters’ eyes are a tad blank – A Christmas Carol is t

he first of Zemeckis’ computer-animated features to show distinct traces of a soul. Whether it has the staying power to remain a seasonal staple remains to be seen but it’s a darkly beautiful Gothic bedtime tale that is the ideal cinematic Christmas present to sneak an early peek at. Just remember to ask for some 3D glasses with it.
3.5 out of 5
*Originally printed in SFU's The Peak: Nov. 15th, 2009.
Posted by Cam Smith at 8:17 PM No comments: