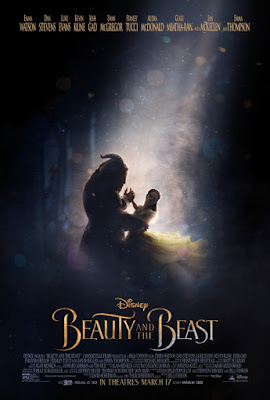 To compare Walt Disney’s live action Beauty and the Beast remake to its 1991 animated classic predecessor is almost completely pointless. Gary Trousdale and Kirk Wise’s Best Picture-nominated masterpiece is a nearly perfect work that, alongside The Lion King, marks the pinnacle of the company’s Renaissance era. Its haunting, heartfelt and gorgeous artistry forever evolved the form, moved generations of movie-lovers and now occupies the canon of all-time cinema triumphs. Whereas The Jungle Book offered plenty of wiggle room for invention, refining and reinterpretation, no such luck here. And so, rather thanklessly, director Bill Condon’s update of this tale as old as time can aspire only to honor what came before. 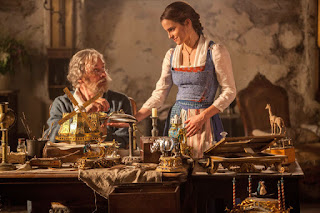 Luckily, for the most part this glossy big budget production does. While its reason for existing certainly has far more to do with profit generation than creative ambition, the filmmakers mostly succeed in pulling off the beloved highs and channeling enough of the original’s romantic and idealistic spirit to deliver an appealing old fashioned adventure steeped in new school technology. Whether or not that justifies the effort and countless millions is a question that will likely divide audiences, but there’s still enough novelty here to warrant attention as a modestly enchanting companion piece.

As you’d probably expect, there’s not a lot of variation in the story on this return visit. Belle (Emma Watson) is still a plucky and book-smart heroine, weary of day-to-day life in her “poor provincial town,” who winds up imprisoned in the forgotten castle of the monstrous cursed prince (Dan Stevens) after taking the place of her unlucky inventor father (Kevin Kline). The Beast’s abode is, of course, still occupied by the same gaggle of interfering household items, including Lumière (Ewan McGregor), Cogsworth (Ian McKellan), Chip (Nathan Mack) and Mrs. Potts (Emma Thompson), who enthusiastically adopt the role of matchmakers in order to break the spell that has altered them. Villainy is supplied once again by the narcissistic creep Gaston (Luke Evans), a boastful war hero with anger issues, and his simpering, visibly lovelorn cohort LeFou (Josh Gad, camping it up with wild abandon). 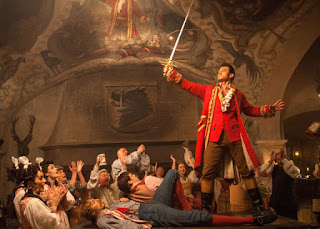 To be fair, though, the script, by Stephen Chbosky (The Perks of Being a Wallflower) and Evan Spiliotopoulos (The Huntsman: Winter’s War), doesn’t completely follow Linda Woolverton’s original screenplay – how it isn’t credited as source material is still a mite baffling - verbatim. Beauty and the Beast 2017 pleasantly expands on the courtship between the two confused prospective lovers, such as a nice addition wherein her passion for Shakespeare inspires him to call upon his own invaluable aristocratic education, and deepens the sadism and manipulative tendencies of Evans’ blustering antagonist. Unfortunately, they also graft a thoroughly unnecessary subplot regarding the Beast and Belle’s mothers onto the picture, the latter of which sticks out like a jarring sore thumb thanks to its too grim tone and a lazy throwaway plot device gimmick. At 129 minutes, tacked on material like this, a hacky and simplistic attempt to ground the characters’ psychology and give them a common bond, only takes up time with zero emotional reward.

Alas, it’s a bit of a damning testament that, more often than not, it is the new material that brings this Beauty and the Beast to a screeching halt, especially given the flawless economical storytelling of the 1991 film. Thankfully Condon, whose diverse and slightly batty resume, which includes entries like Kinsey, Dreamgirls and the two Twilight Saga: Breaking Dawn installments, implicitly understands what he’s selling tickets for. He stages the cherished Alan Menken/Howard Ashman musical numbers with a showman’s splashy aplomb (soaring opener “Belle” and the eternally chill-inducing title number are the most dazzling showstoppers), and even gives Beast a grandly tormented torch song of his own. And despite having the impossible task of creating visual splendor on par with Disney animation at its best, he and his art department blanket the screen with stylishly melancholy gothic atmosphere, complete with perpetual snowfall and crumbling stone architecture with a groaning pulse of its own. Echoes can often be felt of Jean Cocteau’s hypnotic 1946 version of the fairy tale. 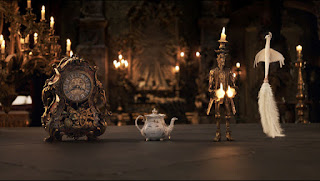 Condon and his team deserve credit for the technical polish of this Beauty and the Beast, which is more of a sumptuous visual extravaganza than Maleficent, the Alice in Wonderland movies or Kenneth Branagh’s otherwise superior Cinderella. They’re so good at adapting the unforgettable iconography of the original that’s it’s easy to take for granted, as the parts that stumble stand out more than the countless elements that don't. Yet, it must be said, the Beast’s transformed servants simply don’t work when grounded in our physical reality. Their stiff, busy designs lack charisma and never achieve the larger than life presence of their more colorful counterparts. This deficiency is most felt in the huge “Be Our Guest” sequence, which the director goes for broke with, but is drained of life and charm thanks to its performers’ lack of broadly exaggerated body language and expressive facial gestures. It’s easy to see why the filmmakers didn’t bother to include the song “Human Again,” which was added for the original’s 2002 re-release.

Despite all the shiny bells and whistles, all would be for naught if the performances fell flat. And, thankfully, they're almost all uniformly winning. Watson cheerfully radiates Belle's proud, inquisitive confidence, and knows exactly how to sell the pure wide-eyed wonder of a Disney heroine. She generates strong sparks with Stevens’ poignantly mournful mo-capped Beast, who’s noticeably less animalistic than Robby Benson’s, and has gentle chemistry with the always reliable Kline. Perhaps unsurprisingly, though, it’s Evans’ Gaston who steals the show! The actor, often cast in underwritten roles like the title bloodsucker in Dracula Untold and as the baddie of Fast & Furious 6, must have known he had landed an ideal showcase and attacks it with the ferocity of a pack of ravenous white wolves. He exhibits all the cartoonish, clueless vanity you’d hope (the “Gaston” performance doesn’t disappoint), with unsettling layers of intense psychological weirdness bubbling underneath. 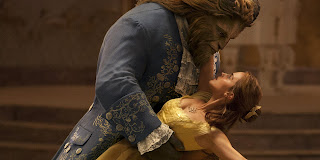 With a flurry of live action Disney reinterpretations in the works – including The Lion King, Mulan, Fantasia’s “Night on Bald Mountain,” Peter Pan and *ahem* Dumbo – it’s tough to view this Beauty and the Beast as something that's overly special. However it’s a solidly transporting family entertainment that effectively taps into the audience’s profoundly powerful nostalgia for the 1991 film. This is skillful studio moviemaking, featuring many of the industry’s finest craftspeople working with ungodly resources to realize their vision. It just never convinces us into believing we’re watching magic.