Epi-cast: Episode 4 - "Clash Of The Eurotrash" 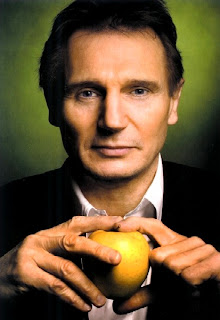 Yep. It's here again. Despite the many deadlines, assignments and chores which fill my daily life to the brim on any given week, there is ALWAYS time for another righteous slice of Epi-Cast. So, yes, once again my unhinged vocal co-host Tom Wytrwal and I attack the big film issues and topics for your collective amusement. Laugh at us, or with us. We don't care.

Epicast: Episode 4 - "Clash of the Eurotrash."
In this stalwart return to form after last week's truncated tomfoolery, Cam and Tom contemplate a duo of European-set action extravaganzas: Underworld: Rise of the Lycans and Liam Neeson's Taken. You'll never guess which one almost sends Cam over the edge into a raving cacophony of rage. As well, they get in touch with their feminine sides discussing the Renee Zellweger vehicle New In Town, Woody Allen's Hannah And Her Sisters, and Tom finally reveals his feelings towards The Curious Case of Benjamin Button. Ed Harris' retro-western Appaloosa is also mentioned, along with your favourite hosts-with-the-mosts' opinions regarding the Oscar nominations. It's fun for the whole dysfunctional flesh-eating family!

P.S.: We are also now available on iTunes as well. Simply do a store search for "Epi-Cast" and lo and behold we're there. Oh, but we're not the Christian blither-blather one.
Posted by Cam Smith at 9:41 PM No comments: 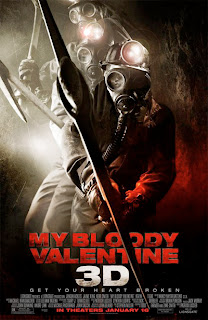 Is there any film-making technology rifer with possibilities for cheesy excess than the 3-D format? While Hollywood has recently made multi-million dollar efforts to rehabilitate the once bastardized film-making technique with semi-classy experiments such as Beowulf, Journey to the Centre of the Earth and Bolt, these efforts have been met with mixed critical and commercial response. For sure the improved filming process allows for more clearly rendered images, and the immersive quality of the technology thrills ADD-addled ankle-biters, but where’s the goofy audience-jolting fun that the format once offered? When nasty characters like Jason, Freddy and Jaws leapt ferociously off the screen and into the popcorn-stuffed faces of packed houses of screaming teenage movie-goers?

Spotting the chance to exploit this desire for eye-popping cinematic cheese, Lionsgate films bought up the rights to a little-remembered 1981 Canadian splatter-hous 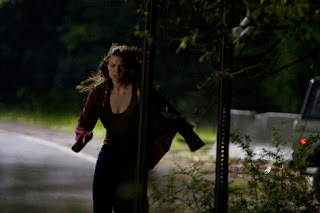 e epic and set out to create the mother of all 3-D Slasher pictures. Fortunately for gore-hounds and carnage-connoisseurs of all ages, the resulting film, My Bloody Valentine 3-D, is both a playfully amusing throwback to the Dead Teenager classics of yesteryear, as well as a rapturously entertaining exercise in three-dimensional grisliness.
Set in the small mining community of Harmony, where a tragic mining accident recently left five dead and one man in a coma, MBV 3-D opens in spectacular fashion with the surviving victim ab 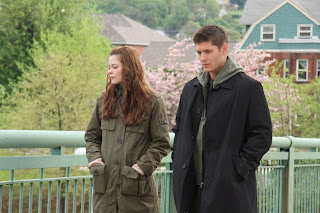 ruptly awakening from his hospital bed with blood-thirsty vengeance running through his fractured psyche. Donning a sinister black gas mask, hard-hat and jumpsuit, he goes on a Valentine’s Day mass-murder spree which results in roughly twenty sorry individuals being impaled on his merciless pick-axe. However, after being seemingly shot down by police, and left to die in a crushing mine collapse, life is once again allowed to revert back to normal in the once-peaceful town.
...For ten years at least. Unfortunately, with the sudden reappearance of the former mine-owner’s son Tom Hanniger (Jensen Ackles), who’s returning after a decade-long, soul-searching sabbatical with plans to sell the prosperous mine, the amount of pick-axe-related homicides begins to drastically rise. Doggedly in pursu 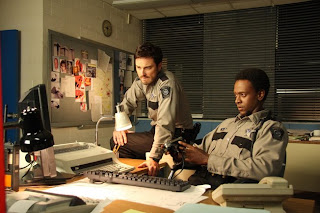 it of the slayer’s identity is the shady Sheriff Axel Palmer (Kerr Smith), a stubble-faced womanizer who is now married to Tom’s High School sweetheart Sarah (Jaime King). As the horrifically butchered bodies begin to pile-up, all suspicions begin to fall on Tom, who, with the aid of the conflicted Sarah, must attempt to clear his name and unravel the mystery behind who exactly is hiding behind that ghastly wheezing mask.
While My Bloody Valentine 3-D’s plotline seems undeniably ripped from a thousand other horror tales featuring mar 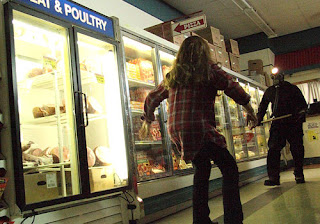 auding masked executioners, it seems doubtful that anyone will truly care. Rather, it’s infinitely more important to spotlight the brilliantly seamy methods in which director Patrick Lussier utilizes the flick’s state-of-the-art 3-D effects. With gleeful sadism which recalls Alexander Aja’s The Hills Have Eyes remake, Lussier fills his frames with countless sordid sights, including a multitude of merciless acts of pick-axe slaughter, horrendously graphic glimpses at dismembered corpses and even a five-minute chase scene featuring a nubile blonde wearing nothing but a look of terror.
For all the credit – or perhaps blame – Lussier deserves for delivering such an unapologetic visual disgustathon, his actors do a good job in keeping the audience involv ed when heads, eyeballs and jawbones aren’t rolling. Kerr Smith, of Dawson’s Creek fame, is a compelling jerk, while Jaime King is nicely understated and natural playing the prototypical Slasher film heroine. Jensen Ackles is charismatic and likable, yet also displays a nice level of torment which aids considerably in underscoring the ambiguity of the character. Also, it’s great to see the legendary Tom Atkins, star of The Fog and Halloween III, back on the big screen as the town’s tough-talking, hard-assed former Sheriff.
It can’t be stressed enough, though, the importance in seeing this film in 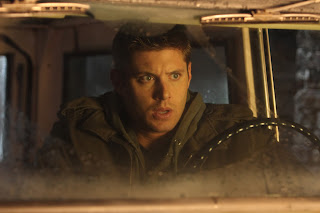 its intended 3-D projection, inside a theatre packed with like-minded patrons. My own experience, which featured a gaggle of screeching teenagers – some of whom proved to be under-age, and were loudly removed by humourless theatre staff members - mixed with unkempt middle-aged men who likely hadn’t bathed since Jason took Manhattan, added a delicious layer of amusement park joviality to the whole event. Indeed, every squirt of blood, jutting blade and flash of nudity was met with celebratory gratitude.
Ultimately, MBV 3-D lives and dies by its gimmick as, in terms of its respective genre, the film is only slightly above par. However, as a wickedly rowdy three-dimensional roller-coaster ride, it’s a much-appreciated reminder of the tasteless excitement offered by the grossest of B- 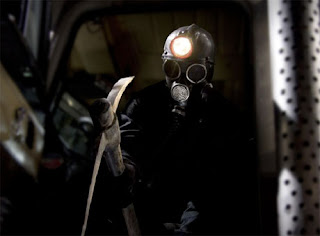 movie delights. Before seeing the film, logic told me that there was a limit on how many three-dimensional pick-axe murders one could see before becoming bored. To my surprise and relief, My Bloody Valentine 3-D proved me dead wrong.
The Movie: 3 out of 5
The 3-D Experience: 4 out of 5
Over-all: 3.5 out of 5
*Originally printed in SFU's The Peak: Jan. 26th, 2009.
Posted by Cam Smith at 3:40 PM No comments: 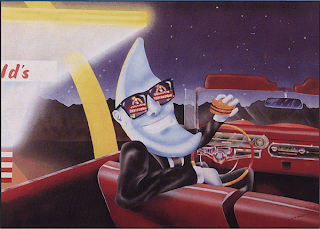 Yup, you begged, you pleaded, and yet we still ignored you all and have continued to crank out these half-witted verbal travelogues of the inner workings of our film-plugged psyches. So strap on your stupid-hats and get ready for another slap-tastic journey with your iron-fisted overlords/podcast hosts: Cam Smith and Tom Wytrwal.

Epi-Cast: Episode 3.5 - "Rourkes, Reichs and Mac Tonights!
In this abbreviated quickie entry Cam and Tom strap on their jock-straps and chin-guards and get all oiled up and, um... they, er... Oh right, they enter a cage match of death in attempting to review and analyze Darren Aronofsky's Mickey Rourke vehicle The Wrestler. They also kick around a few choice thought-provoking films including The Unborn, Downfall, The Golden Compass and American Pie 2(!?). And just when you thought they were burrowing down and getting all professional-like, they wander off on a ten-minute tangeant in which they mourn the absence of out-dated McDonald's mascots. Seriously.

P.S.: We are also now available on iTunes as well. Simply do a store search for "Epi-Cast" and lo and behold we're there. Oh, but our's is the film show, not the Christian talky one.
Posted by Cam Smith at 10:26 PM No comments: