Film Review - TEENAGE MUTANT NINJA TURTLES: OUT OF THE SHADOWS 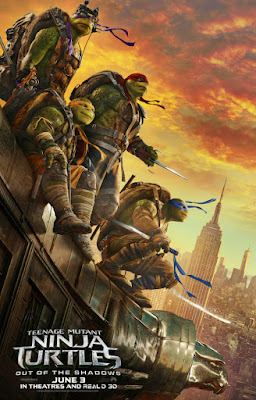 Unlike its noxious sludge-pile predecessor, Teenage Mutant Ninja Turtles: Out of the Shadows can make the proud claim of not being the worst major studio release of its year. A noticeable course correction and casual retconning of the depressingly successful 2014 franchise reimagining, this sequel, directed by David Green, relentlessly pumps the classic animated series nostalgia gas pedal. Not only are Rocksteady and Bebop on hand to rectify the generation-scarring failed promise of 1991’s Secret of the Ooze, so are Krang, Casey Jones, Baxter Stockman, the Technodrome and the Pizza Wagon (*complete with manhole-shooting play action)! It doesn’t add up to much of a movie, but will undoubtedly sell some merchandise. And let’s not pretend the latter achievement wasn’t the primary creative intent.

Once again returning to his powerful producer chair, Michael Bay’s presence can be felt strongly throughout. As far as some of the slick cinematic style and action goes, that isn’t necessarily a bad thing. However, Out of the Shadows also boasts the tedious half-assed and repellent hallmarks of the Transformers franchise (Bumblebee even has a cameo). The plot is seemingly made up after the fact in the editing room, and there’s just enough frat jerk male posturing, awkward misogyny, crass product integration and scatological juvenility to fill out the standard check list. Want to see a giant CG warthog enthusiastically stare down his pants at his altered junk? This is the motion picture for you, my friend!

As Out of the Shadows opens, the now slightly kinder and gentler green machines are suffering serious morale issues. Confined to their underground dwellings, alongside wise sensei Splinter (Peter D. Badalamenti, voice by Tony Shalhoub), they yearn for acceptance from the humans they protect above. While Leonardo (Pete Ploszek – taking over voice duties from Johnny Knoxville) and Donatello (Jeremy Howard) are willing to make the necessary sacrifice, Michelangelo (Noel Fisher) and Raphael (Alan Ritchson) are going stir crazy and fostering growing resentment towards their brothers’ willingness to continue the lonely status quo.

Crisis brings them back to the surface, though, when April O’Neil (Megan Fox) stumbles across a conspiracy linking TCRI scientist Baxter Stockman (Tyler Perry) to the incarcerated – and inexplicably no longer monstrous and, um, dead - Shredder (Brian Tee, replacing Tohoru Masamune). After the heavily bladed adversary is transported to the mysterious Planet X, during a daring prison convoy escape, he strikes a pact with the slimy, sinister alien Krang (Brad Garrett) to collaborate on a plan for Earthly domination. With a potential doomsday scenario on the horizon, the turtles, April and disgraced corrections officer Casey Jones (Stephen Amell) embark on a dangerous scavenger hunt to track down otherworldly technology that will prevent the invading conqueror from entering their realm. Unfortunately, this task is further complicated by the emergence of Stockman’s lumbering experimental animal/human hybrid warriors; the unstoppable rhino Rocksteady (WWE wrestler Sheamus) and his snorting warthog accomplice Bebop (Gary Anthony Williams). 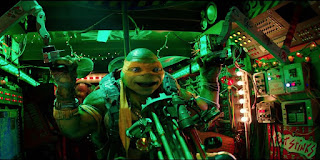 Among the litany of maddening problems plaguing the previous entry, the most damning was its utter inability to make the title protagonists likeable. Oddly, this had never been the case previously. And although Out of the Shadows hasn’t quite solved the problem it is closer to the right track. The designs are still horrendously unappealing to look at, and they rarely seem to occupy any sort of tangible reality (the movie is so fake-looking it should probably have been 100-percent animated), but the personalities - Donatello in particular - feel more polished, energetic and distinctive. Michelangelo, alas, remains a grating bro-tastic embodiment of Bay-ian id and would benefit from even more toning down. At least Master Splinter no longer looks and behaves like psychotic nightmare fuel, which is nice, and he actually scores a funny or two.

These Poochie-fied versions of the TMNT are again undone by not being grounded by compelling storytelling. Whereas the 1990 film plunked them into an adventure that was fun, lively, and even occasionally emotional, Out of the Shadows writers Josh Applebaum and Andre Nemec strand them in a nonsensical narrative that feels like bad fanboy improv. During Rocksteady and Bebop’s creation we’re informed humans have dormant genes connecting them to various members of the animal kingdom. Sure. 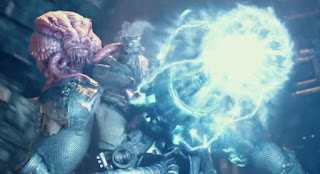 Apparently content to aspire to the base artistic heights of an old Saturday morning cartoon/toy commercial, the movie often lazily tosses out internal logic with the sewer water. Shredder’s abrupt trip to Dimension X unfolds as if crucial footage was lost after production wrapped, for example, and at one point the heroes fly from Brazil to New York seemingly in minutes. Even worse, the all-important McGuffin quest driving the picture feels ripped out of one of Bay’s cruddy Transformers flicks and just consists of characters frantically competing for confusing, vaguely-defined plot points without any momentum or suspense.


The screenplay does correctly place the turtles center stage, though, with Out of the Shadows’ many supporting figures offering distractions generally more appreciated than irritating. Since no actor is capable of delivering a good performance with material this dire, those who camp it up walk away looking the best. Gone Girl scene-stealer Perry’s turn as the loony Stockman almost (Almost!) persuades us into desiring a Baxter-as-fly threequel, and Sheamus and Williams are unexpectedly enjoyable as Rocksteady and Bebop, who are done about as well as one could hope. 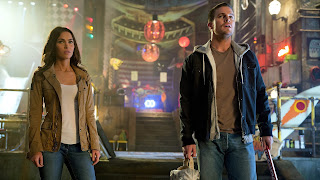 Fox’s April is more problematic; the actress has an active non-damsel role with plenty to contribute, yet is alternately presented as shameless eye candy in tight tank tops and, early on, a ludicrous Britney-esque schoolgirl costume. That said she has serviceable chemistry with the amiable Amell - whose convincing physicality helps make up for the fact he’s as edgy as Batman Forever-era Chris O’Donnell – and a mugging Will Arnett as Vernon Fenwick. As a concerned citizen, it’s also my responsibility to note the immeasurably talented Laura Linney shows up as a nosy police chief, possibly against her will. Future viewings will have to determine whether she’s blinking H-E-L-P-M-E in Morse code.

Franchise newcomer Green, despite being saddled with a lost cause screenplay, is still head and shoulders above previous director Jonathan Liebesman as far as colorful visuals go. His early action sequences – predominantly the early truck chase and a wildly over the top race down the river rapids of Brazil – are poppy and engaging, and he’s undeniably strong at staging impact shots ready made for trailers and TV spots. By the time the city-shaking climax hits, however, the helmer is totally overwhelmed, delivering a final battle with Krang (barely a character, sadly) that’s the most fragmented and unsatisfying computer effects-driven finale since last summer’s wretched Fantastic Four. 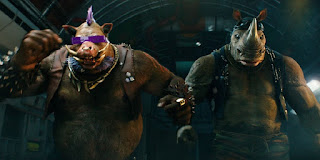 As disposably inane and hacky as Teenage Mutant Ninja Turtles: Out of the Shadows is, it’s nonetheless undeniably aided by the bottom of the barrel expectations established by part one. Hardcore brand loyalists will eat up the non-stop fan service and likely be willing to overlook the soulless cash-in junkiness and Bay-isms surrounding it. As for the rest of us? Better to write off this broken incarnation and wait for the next mutation.