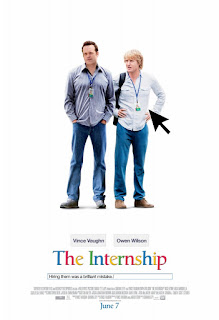 What’s become of Vince Vaughn? That once great, lumbering huckster motormouth, whose inspired rat-a-tat-tat stream-of-consciousness verbal diarrhea propelled hits like The Wedding Crashers and Swingers? I sincerely miss that Vaughn, because there’s little endearing about watching him transform into a hollow corporate shill. As if the 2012 alien invader Costco commercial The Watch wasn’t bad enough, he’s back with The Internship, a weary “comic” tribute to the infinite wonders of Google. And he’s even dragged along his wedding crashing buddy Owen Wilson for company! Shameless. Just shameless.

Co-written and produced by the lanky star, The Internship is a stale trudge through the dustiest tropes in Comedy Land. Both a fish-out-of-water yarn and an Animal House-style Nerds vs. Jocks underdog story, the film casts Vaughn and Wilson as over-confident salesmen who find themselves tossed out on their asses after their small-time outfit collapses. Computer-illiterate and without job skills, the duo inexplicably snag intern spots at almighty Google after one wildly disastrous video conference interview. Assigned to a group with four other misfits — the cynical kid who hates everything (Dylan O’Brien), the hyper-anxious Asian boy with severe mommy issues (Tobit Raphael), the white nerd who acts gangsta (Josh Brener) and the sexy girl who’s more innocent than she acts (Tiya Sircar) — the guys must undergo a grueling series of team challenges (Quidditch included) with only a precious handful of jobs awaiting the champions. 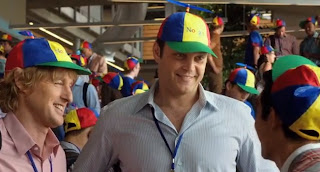 The dusty screenplay for The Internship, co-written by Jared Stern, feels a decade old (neither lead understands the term “online”) and has zero surprises up its sleeves as it lazily meanders through clichés we’ve seen done better elsewhere. The cute-but-icy female romantic interest (Rose Byrne) who refuses to date Wilson? A life-changing trip to a strip club where the most introverted team-member goes drunken loco? How about a huge public comeuppance for our heroes’ cartoonishly sadistic nemesis (Max Minghella)?

In clever hands, these chestnuts might be more effective, however, under the eye of directorial gun-for-hire Shawn Levy (Night at the Museum, Real Steel), The Internship has no energy, no sense of urgency. It’s as safe and lethargically middle-of-the-road stupid as a Happy Madison production, only with 10 times the product placement. Incessant Google business aside – all of the company’s accomplishments is exhaustively catalogued – the film also crowbars in multiple awkward X-Men references. Why, you ask? Probably because the studio, 20th Century Fox, is releasing The Wolverine next month (Huzza for cross-promotion!). 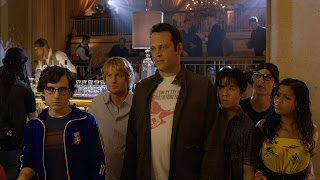 Damned as the whole enterprise is, Vaughn and Wilson are still an engaging team and manage some amusing riffing. The picture is not devoid of very mild laughs (Wilson’s date with Byrne features some fun banter, and Vaughn’s countless Flashdance metaphors earn smiles). Yet, it’d likely be more entertaining to watch two hours of these actors improv-ing in front of a sheet than to sit through this crass, opportunistic exercise in brand-brainwashing. It’s a criminal waste of time, for the talent and the audience. In fact, The Internship is so dumbly condescending in its intentions that you may even – crazy as it sounds – find yourself debating whether to give Bing another chance.

*Originally published at BeatRoute Magazine.
Posted by Cam Smith at 10:23 PM No comments:

Film Review - NOW YOU SEE ME 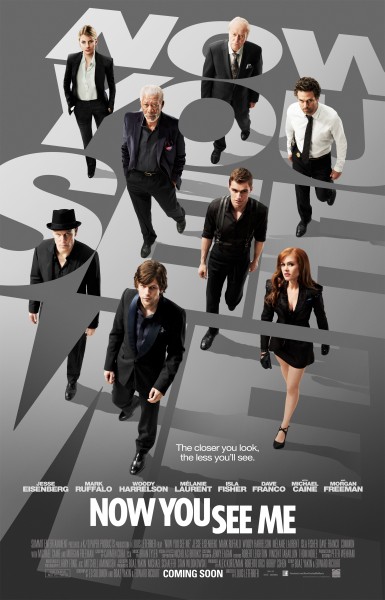 “The secret impresses no one. The trick you use it for is everything.”
- Christian Bale, The Prestige.

In his captivating, noir-tinged 2006 dueling illusionists tale, Christopher Nolan touched upon an essential truth about both the art of magic and cinema that’s beautifully expressed in the above quote. Essentially, that film argued that, though audiences yearn to be surprised and astonished, learning the methods behind the manipulation only leaves them feeling unsatisfied. Further, the skills and technique – no matter how clever - are ultimately meaningless if the act isn’t up to snuff.

Such is the case with Now You See Me, director Louis Leterrier’s lively-but-disappointing magic-themed caper thriller, which brings boundless energy and Hollywood flash-and-dazzle to a fairly unspectacular show. You certainly can’t blame the gimmick – a quartet of illusionists pulling off impossible crimes while being pursued by the law – because it’s a damn neat hook. No, the problem here is that, for all of the convoluted cinematic sleight-of-hand hijinx, we’re never transported anywhere particularly new or awesome. And when the curtain finally falls, and all cards are revealed, we’re left a little deflated, asking ourselves “is that all?” Yes… Yes it is, folks. 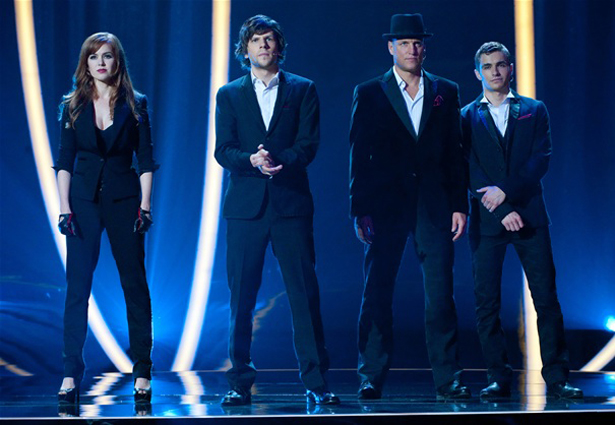 Any twist-oriented picture demands a tightly written screenplay, otherwise the needlessly overcomplicated plot strands pile up like a rush hour car wreck. The narrative spine of Now You See Me, penned by Ed Solomon (Men In Black), Boaz Yakin (Prince of Persia: The Sands Of Time) and first-timer Edward Ricourt, is something of a mess, robbing interesting personalities of dimension and meandering when it should be laser-focused. Worse, it attempts to explain away its many logical gaps, utterly unrealistic (CG-aided) stage illusions and character deficiencies by waving its hand over the viewer’s eyes and declaring that nothing has to make sense because magic is involved. Which is just plain lazy. 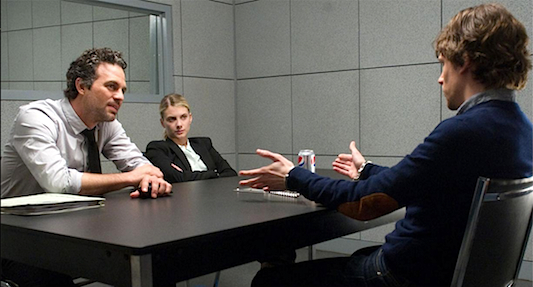 And, yet, for all of Now You See Me’s stumblings, it’s hard not to admire the crackling, playful pulse generated by helmer Leterrier. Having proven himself capable of crafting stylish, fun B-movies (The Incredible Hulk, The Transporter and Unleashed speak to his strengths, 2010’s Clash of the Titans most certainly does not), the director’s fast-paced Ocean’s Eleven-like vibe is the film’s best weapon. This is shaggy material, but he does everything he can to jolt it to life. The second half of the picture gradually defeats him, however he still manages to go down swinging.

Leterrier has great collaborators in his attention-grabbing cast. Our avatar down this rabbit hole, Ruffalo, does cynical affability better than almost anyone, and his pithy worldliness is nicely contrasted against Laurent’s cheerful childlike sense of wonder. Freeman is a wily treat and it’s always a blast to see Michael Caine, as the criminals’ financial backer, in greedy bastard mode. The Four Horsemen – as unfortunately underdeveloped as they are – are intriguing creations, and enjoyable to watch bounce off one another. Eisenberg remixes his Mark Zuckerberg performance with an added layer of celebrity egomania to potent effect, and Harrelson delivers another of his lovable rascal turns. Fisher and Franco have less to do, although each is given an amusing moment or two (Franco’s trick-infused tussle with Ruffalo is a highlight). All that said, the group does fall short at playing convincing stage performers, lacking the storytelling brilliance and charisma exemplified by authentic superstars such as David Copperfield, Criss Angel or Penn & Teller. They behave more like hopped-up cheerleaders. 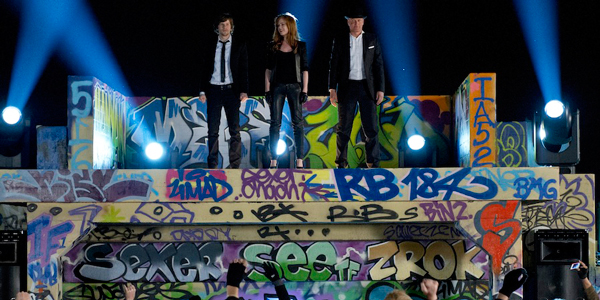 Intermittently engaging, and not without the odd burst of charm, the movie comes oh-so-close to working that its inability to do so chafes that much more. Given the concept and cast, this could have been a glossy, cool crowd-pleaser. Now You See Me, at the end of the day, is merely an empty, pretty diversion, vanishing from the recesses of the mind faster than one can even exclaim “Presto!”

*Originally published at BeatRoute Magazine.
Posted by Cam Smith at 2:32 AM No comments: