Film Review - LAND OF THE LOST: A Prehistoric Oddity... 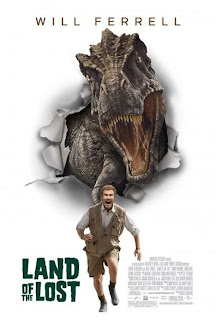 Brad Silberling’s Land of the Lost is a most curious specimen; a big-bucks bonanza summer movie ostensibly made for almost absolutely no one. It fails as a mainstream comedy, with an unfocussed spattering of gags either too dimly childish for paying adults, or conversely too esoteric and scatological for kids. It also fails at being a successful action-adventure movie, with humungo-bungo special-effects scenes that undercut any potential excitement with ironic silliness and don’t even bother attempting to convince the audience that the actors and creatures are sharing the same geographical space. Some critics have suggested that perhaps it’s aimed at the basement-dwelling stoner demographic who (sadly) made Harold and Kumar into a lucrative franchise. Or maybe, just maybe, it’s intension is solely to please the rapidly withering passionate fan collective (all 106 of them) who worshipped the 1970’s Sid and Marty Krofft Saturday morning TV show of the same name? If you can answer this skull-scratcher, you’re more than a leg up on Universal pictures.

Now, although the above musings may not intimate that this review will wind up being an encouraging recommendation (it won’t.), it isn’t going to be a complete condemna 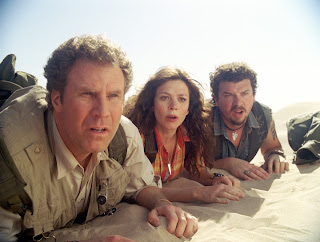 tion either. There’s something almost irresistibly weird about this latest Will Ferrell vehicle, so gonzo in fact that more entertainment can often be found in imagining the behind-the-scenes decisions being made at the time than in accepting the doofy on-screen images at face value. I want to know how Silberling et al managed to swindle the studio out of 100 million cocoanuts in order to craft an epic featuring Ferrell joyfully bathing (repeatedly) in dino piss and Danny McBride gaily singing Cher songs into a gigantic vibrating CG crystal monument. Seriously, if the dude ever writes a book about this production I’m sold. My Amazon shopping cart will be one item fuller, yes sir-ee.
I guess when you’re dealing with a ludicrous audience-unfriendly script – written by Chris Henc 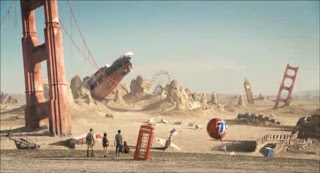 hy & Dennis McNicholas – Will Ferrell is a good fellow to get signed on. He’s genuinely likable and willingly does that out-of-shape-middle-aged-man-in-his-underwear thing which people seem to love. And for sure, his Dr. Rick Marshall, a clueless outcast goofball genius with an eating addiction, does get his chance to strut his ungainly stuff after he, as well as a saucy Cambridge scientist (Anna Friel) and a misogynistic redneck tour-guide/firework salesman (Danny McBride), are transported to the titular location through a space-time vortex created within a sucky forgotten tourist trap attraction.
Arriving in the land, full of gorgeously rendered expansive deserts and impenetrable jungles, the trio are introduced to the smutty Cha-Ka (SNL’s Jorma Taccone – comically de 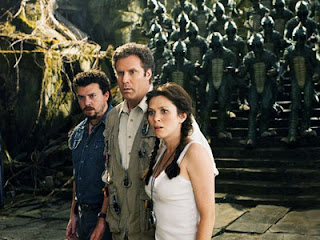 ranged), a local missing link-type, whose stunted brainpower puts him on fairly even ground with Dr. Marshall. With their time-travel device misplaced, and under constant attack by a deceptively clever Tyrannosaurus Rex and the campy local lizard army known as the Sleestaks, the insecure man-child Doctor must find the microscopic hero within himself and lead his ill-equipped inter-dimensional team of explorers (Cha-Ka’s rather expendable) back into their own time.
While variations of this plot could (and indeed have) provided bountiful fuel for dozens upon dozens of h 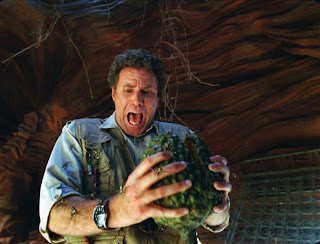 igh concept crowd-pleasers, Land of the Lost begins on an odd note from which it stubbornly refuses to recover, with an on-air scuffle between Marshall and a clearly rigid Matt Lauer wherein the two verbally spar over accusations that the good Doctor’s theories are whack. The scene feels strangely paced – not punchy enough to properly open the film with the necessary bang – and provides a lethargic introduction (and later, end) to the film’s unique universe. As opposed to being a slovenly nimrod, it would have been more fun had Ferrell played his character akin to Michael Richard’s Kramer character; as something of a Rainman-esque idiot savant so far ahead of everyone else around him that his genius can be mistaken for sheer lunacy. Nope, here he eats donuts and acts like a sloth. A Ferrell speciality, but a tired one.
That’s not to suggest that the actor doesn’t get the odd laugh, though. Never one to just idly cash a paycheck, Marshall’s conflict with the film’s dinosaur-star Grumpy, in w 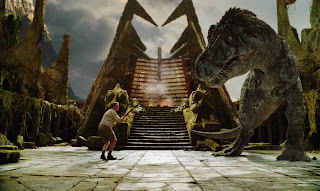 hich their creative ensuing scuffles build to a weirdo crescendo, really works. Similarly, Silberling and Ferrell made a wise decision in refusing to allow Dr. Marshall and Cha-Ka a cheerful union. One of the more hilarious moments comes courtesy of an immature little bit of bitchiness aimed at the dim cave-man by Dr. Marshall with maximum scorn.
McBride, an actor I’ve derided more than once in print and on the Epi-Cast (For download on iTunes right now!), actually managed to 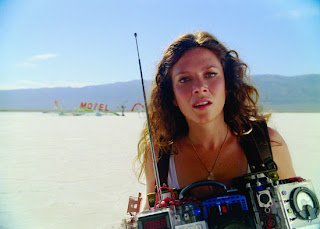 worm his ugly little way into my cold, black heart this time around. He’s casually funny, never going too far out there for a joke, but building fun chemistry with his co-stars and even, dare I say, making me laugh out loud once or twice (It’s gonna be a snowy July!). Anna Friel’s input is relegated mostly to acting perky and parading around in really short shorts and a low-cut tank-top. She looks like she’s having a good time, though! Good for her!
Unfortunately though, the cast isn’t the problem. It’s that the film can never find a proper tone, and is as unfocussed as Marshall and crew during a kinda-lame prolonged scene 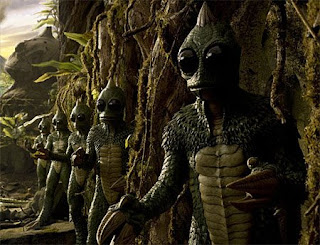 of drug-induced stupor (featuring a giant crab straight out of One Million Years BC!). The laughs are intermittent because most of the lines aren’t particularly sharp, and they’re further weighed down by the effects-driven chaos around them. There’s a raptor attack that is almost savage in its callousness, which seems aimed at horrifying children, shortly followed by an inane gross-out gag featuring a cartoonishly massive mosquito. And just when it couldn’t get any more confused, the Sleestaks show up, looking very much like (read: fake) the Gorn from the original Star Trek series. When the plot kicks into gear involving these scaly beasties it is so off-puttingly bizarre and bewildering that the film stops dead in its tracks. It all just feels too convoluted for a 90-minute comedy featuring prehistoric-poop jokes and caveman boob-grabbing. When all is said and done, movie-goers will likely just shrug their shoulders on the long, silent trudge out of theatre, cursing themselves for not seeing The Hangover instead.
Nevertheless, as I said earlier, it’s impossible to truly despise Land of the Lost simply for the gutsiness of the filmmakers w 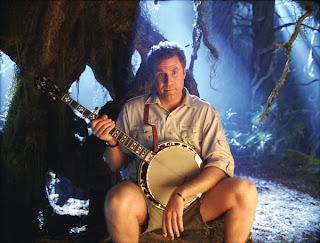 ho have birthed its unholy mass, kicking and screaming, into the summer movie market. It’s a disjointed mess, an exercise in idiocy, a tribute to style-over-substance and further proof that dragging up the corpses of long-dead properties may not be the best idea. However, in actually managing to occasionally surprise me in a season where astonishment is a highly deficient commodity, and concocting a veritable f-u to the ticket-buying public, I feel compelled to express an ounce of admiration. All lovers of the offbeat and slightly subversive should check it out this time around because it’s unlikely, and probably for the better, that you’ll ever get Lost again.
2.5 out of 5
Note: Although grading systems are faulty at best, this particular one has been liften slightly to reflect my admiration of the filmmakers' the-hell-with-the-mainstream mentality. It's a 2-star movie, the extra half-point is my bonus mark.
Posted by Cam Smith at 12:57 AM