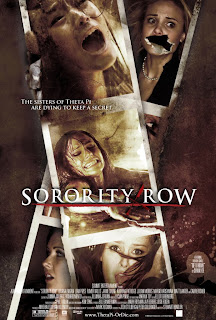 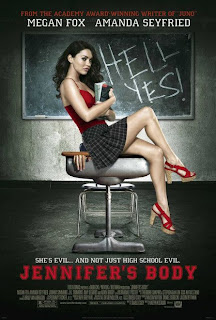 Considering the limited opportunities offered to young actresses working under the current youth-oriented Hollywood paradigm, it’s no wonder so many aspiring starlets wind up screaming for their supper. For where else, beyond romantic comedies, can promising talent find an opportunity to sidestep the Boys’ Club job postings for superhero girlfriends and comedic lust objects and achieve top billing in a boffo weekend-winning release? Strange then, that despite the ever-present supply of female casts and content, criminally few creatively inclined women in directorial or writerly positions, take the ultra-lucrative off-ramp into Terror Town. Due to the current release of duelling blood-spattered buffets, the genre is seeing its first true battle of the sexes in eons, with the hotly anticipated snark-a-thon shrieker Jennifer's Body, overseen by Girlfight helmer Karyn Kasuma and Oscar-winning Juno scribe Diablo Cody, facing off against the fetid Stewart Hendler-directed Slasher Sorority Row.
Although neither film is successful in crossing into the frightfully fruitful ground tilled and harvested by this summer's Drag Me To Hell, Jennifer’s Body comes closest to pro 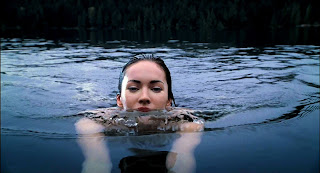 viding the worthiest BOO! for the audience’s buck. Featuring Cody’s distinctive hip-to-the-max vernacular (my favourite line featured a shock victim being referred to as a “Zombie mannequin robot statue”), the film is a quirky yet under-baked hybrid of horror hijinx, sharp-tongued ironic comedy and John Hughes-ian teen drama which never quite gels into the anarchic giggle-and-jolt fest that it aspires to be. Still, it is interesting to watch the gifted behind-the-scenes pair attempt to mine art from demon vomit and exposed innards.
Megan Fox, no stranger to type-casting, stars as a nubile High School cheerleader transformed into a ra 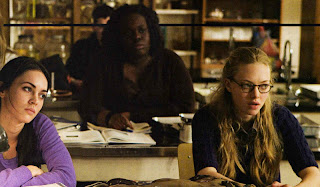 venous succubus after a run-in with a mysterious emo band fronted by a mascara-wearing Adam Brody. Now a vampy, trampy carnivorous force to be reckoned with, making insta-meals of the school’s lusty male population, Jennifer’s lone opposition is her insecure, frequently trod-upon best friend, the appropriately nicknamed Needy (Amanda Seyfried), a saucer-eyed wallflower unprepared for the role of town saviour.
It’s when highlighting this friendship that the movie works best, as it allows Cody – who cameos briefly cameos as a burnt out bar patron – to delve into the cruel and combu 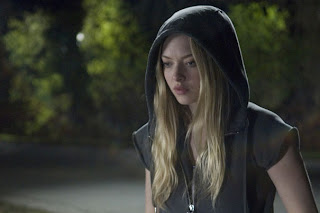 stible nature of self-serving High School friendships. Even when the disappointing deficiency of scares becomes apparent, and the energy flags, the two central actresses, deftly mastering the scribe’s snap, crackle and pop dialogue, keep the film from flatlining with their charismatic and recognizable, if not relatable, characters (Fox even gets to stretch intermittently beyond her standard porn-doll mode, nicely selling Jennifer’s tragic side). The film also gives Adam Brody and J.K. Simmons, as a hook-handed teacher bearing an unspeakably tormented past, hilariously rich comedic turns.
Unfortunately, while Kasuma has made a good-looking flick, turning Vancouver into a supernatur 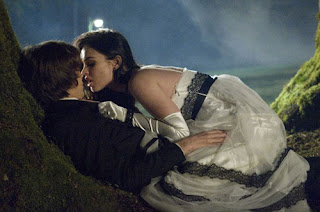 al Gothic wonderland full of portentous forests and glumly desolate suburban sprawls, she can never find a consistently effective tone, with the movie’s final third becoming mired in mucky melodramatics. Ultimately, observing the film’s rickety structure acts as a sage reminder that horror-coms are tough ventures to pull off, and that for every Scream, Evil Dead 2 or Shaun of the Dead, there are a dozen noble failures like Jennifer’s Body lying by the wayside.
Still, Kasuma and Cody’s effort is a masterwork compared to the aggressively stupid and vile Sorority Row, a remake of 1983’s The House of Sorority Row, which featu 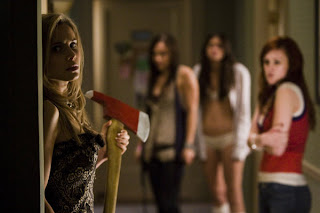 res a gaggle of detestable young Theta Pi sisters, headed by Briana Evigan and Leah Pipes, on the run from a hooded tire-iron-wielding killer after a morally bankrupt prank involving roofies, date rape and murder goes wrong (What if it had gone right?!). Whereas Jennifer’s filmmakers attempted to find humanity in their archetypes, Sorority Row’s cast of characters are people you’d chew off your arm to get away from, a batch of hateful harpies and jerks whose only joys are spreading VD and viciously mocking each other’s eating disorders, sluttiness and cosmetic surgery.
Director Hendler captures these obnoxious women through jittery, bleary camera-work , like a drunk per 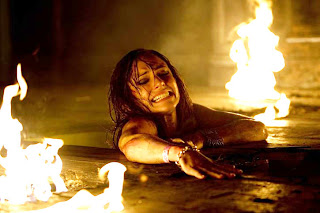 vert’s leer, often cropping off his heavily made-up and grotesquely underlit actresses’ heads in favour of grimy, sweaty close-ups of their chests and behinds. The film also boasts one of the most moronic and nonsensical culprit reveals in recent memory and unimaginative, insipid gore. Only Carrie Fisher’s campy prescence as a shotgun-wielding denmother keeps us from bolting for the exit.
Oddly enough, while Jennifer’s Body knows exactly how to portray the playful pin-up girl sexiness of its fetching stars, Sorority Row stews in its misogynistic tawdry trashin 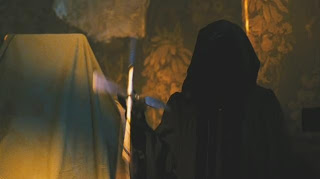 ess convinced that mean-spirited nudity equates entertainment. Watching the two back-to-back, it becomes head-slappingly obvious that, as far as trendy teen horror flicks go, there’s an awful lot that Jennifer’s creators and their ilk could teach their male counterparts, as films like Sorority Row make me yearn for a day when the Scream Queens rule Horror-land.
Jennifer's Body: 2.5 out of 5
Sorority Row: 1 out of 5
*Originally printed in SFU's The Peak: Sept 21st, 2009.
Posted by Cam Smith at 4:59 PM No comments: