Film Review - BANGKOK DANGEROUS: Cage Rules, But BANGKOK Goes Out With A Whimper... 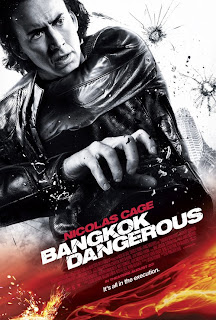 Can we all just agree that Nicolas Cage is the most entertaining actor working today? Sure, he may have a less consistent filmography than Tom Hanks, Denzel Washington or Russell Crowe, but Cage works the hardest for our entertainment dollars, in my lowly opinion. While his peers are tripping over each other chasing Oscar bait and renowned directors, he’s rambling surreal, likely ad-libbed, dialogue about the joys of jelly beans and television while playing a flame-headed second tier superhero. He’s leering like a pervert and stalking Jessica Biel in time-travel schlockbusters. He is even, in his greatest hall-of-fame moment, wearing a giant bear suit and clocking evil hippie women in the schnozzle while screaming about honey and bees! Yep, dammit, I love the oft-wigged eccentric hangdog, and so I was nearly euphoric about attending his latest, a strange exotic hitman drama with the genius title of Bangkok Dangerous.

Before I begin my expository breakdown of Bangkok Dangerous’ plot though, le 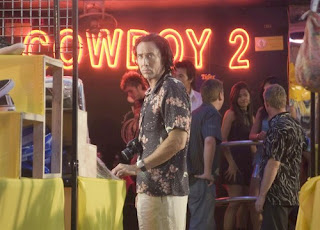 Cage’s character, economically named “Joe”, is a world-class assassin-for-hire, with a coldly methodical work ethic and preference for bad tourist outfits and greasy black hair extensions. Arriving in steamy, seamy Bangkok, Joe becomes quickly accustomed to his lurid surroundings and hires an errand boy, named Kong (Shahkrit Yamnarm), to aid him in his homicidal tasks. Kong, after some initial misgivings, develops a man-crush of sorts on Joe, inspiring the weary hitman to take the young man under his tutelage. Also, along the meandering way, Joe develops a slightly creepy crush on Fon, a local deaf pharmacist (Charlie Yeung), who seems blissfully ignorant towards t 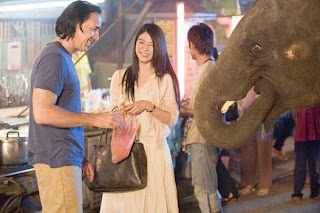 he awkwardness of her hulking, cave-dweller-like new squeeze. In the midst of these relationships are a number of baffling and ill-conceived double-crosses, flashy assassinations (including a stylish drowning sequence) and horrendously incoherent action scenes that completely derail the film’s emotional centre: Joe rediscovering his lost humanity through the beauty and tranquility of Bangkok’s exotic culture and people.

Now, you may have taken my physical descriptions of Cage in the last paragraph as smart-ass ridicule, but it isn’t intended to be. Rather, I believe (truly, truly believe) that Cage’s physical presence and appearance in this film to be wholly intended. How else to explain the stooped posture and tacky aesthetics? Cage has always had a fondness for white-trash chic (Re-watch C 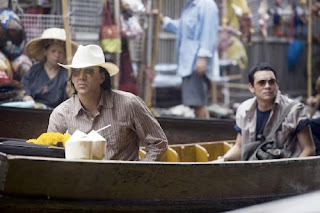 on Air or Next. See what I mean?), and I think that Joe is one of the actor’s more interestingly wacky recent on-screen performances. The way he offsets his shabby exterior with a tired, world-weary attitude is actually quite appealing. The film’s best scene, where Joe first meets the lovely Fon in the pharmacy, has a gentle sort of off-beat grace about it. Carried out almost completely in silence, it allows Cage to exercise his talent for physical acting and stream-of-conscious verbal sputtering, which Yeung matches suitably with unspoken elegance. Even while I was pondering the potential liabilities involved with employing a mute, hearing-impaired woman as your pharmaceutical customer service representative (“How many pills a day? Two..? Five..? The whole bottle!?”), I was able to overlook the logistics and be entertained by the pleasantness of the moment.

If only the rest of the film was interested in following such a character-rich path. The directors, who work under the 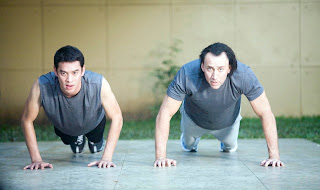 badass moniker “The Pang Brothers!” (Okay, I added the exclamation point for effect, but still...), have watched way too much flashy American junk for their own good. So instead of setting-appropriate transitions and graceful camera moves, we are pummelled with heavily edited action scenes and filler bits that reminded me of CSI and the Saw films. Speaking of which, Bangkok Dangerous is crammed to the gills with gun battles that can only be described as John Woo-On-Stupid-Pills. Apparently unable to match the stylishness of Woo, the Pang Bros. have instead wound up with a high-speed canal gon

dola chase that packs all the intensity of a paddleboat race, and a final shoot-out that, despite a record number of exploding water jugs, is as thrilling as City Council coverage on community television. As well, the directors’ choice to under-lit the sets and shoot through grainy filters makes the whole darn thing look like a straight-to-video Dolph Lundgren opus. I did, however, giggle at their shot from inside a car trunk – an obvious Tarantino homage. Keep dreamin’ brothers Pang.

Yet, Nic Cage’s strange charisma makes most of this shambling mess mildly int 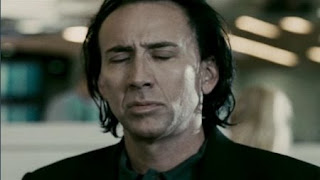 eresting. So, if you too have been willingly inducted into the Cult of Cage, I’d consider guiltily checking this one out on DVD (Preferably on 2-for-1 night). The majority, however, should steer well clear. Unfortunately, despite promises of sensationalized violence and lurid subject matter, Bangkok couldn’t be any more harmless.