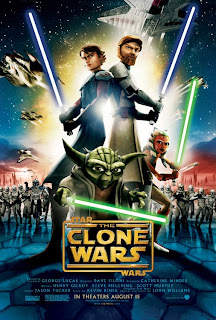 Man am I glad I didn't do a "7 Days Of The Bat"-style countdown to Star Wars: The Clone Wars. How demoralizing and pitiful would that have wound up being? I can picture it now: Basking in the glory of the original trilogy, entertained and casually supportive of the prequel trilogy and then... collapsed in a heap of self-pity and overindulgent misery after The Clone Wars, wrapped in a blanket, shaking, single tear drops rolling down my quivering cheeks onto the glossy surface of my autographed Boba Fett photo... Whew, good thing I avoided that heartache! Oh wait, I didn't, I saw The Clone Wars!

Now, I'm a big time Star Wars fan. Used to be a serious die-hard. I consider the original trilogy to be th

e catalyst for my lifetime of borderline troubling film fanaticism (including this blog!). I even went to Episodes II & III in full Darth Vader regalia. Some would call that sad. I call it the greatest of glories. But then, I'm often an idiot.
Regardless, despite early warning signs, I optimistically took my seat, row 6 centre, ready to be sped off to a galaxy far, far away. The lights darkened. The trailers (Including Harry Potter VI and Bolt) ran their course. And the Warner Bros. logo came up on the screen. What the? That just ain't right! A lifetime of seeing the 20th Century Fox logo has created a Pavlovian response in me in that that

particular corporate fanfare immediately draws shivers of geeked-out giddiness. The Warner Bros. logo just made me pause... But then the Lucasfilm logo... Omigod, here it was! BAM! STAR WARS: THE CLONE WARS... with the Star Wars theme played by the most inept, half-assed junior-high band in history. No really, it's groin-kickingly lousy. Obviously John Williams wasn't involved, but couldn't they just use the recordings from the Star Wars library? Apparently not. So, yeah, that hurt. But then we were all collectively denied an opening crawl. Instead, we were "treated" to a breathless Starship Troopers-like narration that brought us up to speed with the galactic events. Which I'll do now.
Taking place after the events of Episode II, the galaxy has become embroiled in a world-shattering conflict between the Galactic Republic's clo 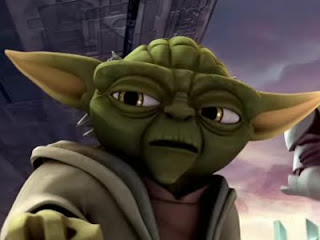 ne troopers and the Trade Federation's droid army. Crime has become widespread as the Jedi forces focus on the battles at hand, and the Hutt clans' crime organization is thriving. In the middle of all this (bland) chaos, Jabba's infant son has been kidnapped by space pirates. Seeing this as an opportunity in gaining access to the Hutt's trade routes, Senator Palpatine (Ian Abercrombie) has ordered the Jedi’s to rescue the squealing slime-bucket in order to win favour with the crime lord. Unfortunately for would-be heroes Anakin (Matt Lander) and early teen padawan Ahsoka Tano (Ashley Eckstein), the whole ordeal is a sinister set-up orchestr 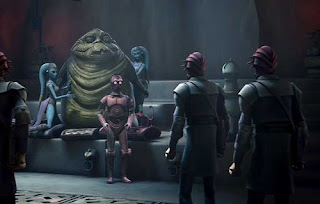 ated by the nefarious Count Dooku (Christopher Lee) and evil Jedi-killer Asajj Ventress (Nika Futterman) to frame the do-gooders and cast them in a negative light for his royal Bloatedness. Thus, it's up to our resourceful heroes, aided by Obi-Wan Kenobi (James Arnold Taylor) and Yoda (Tom Kane), to foil the Sithian (Is that a word?) plot and restore peace to the, uh... Well, okay that's going a bit far, but they do have to reunite the slug gangster with his precious "Punky Muffin" and get access to those ever-lovin' trade routes.
As a central story, what The Clone Wars offers up isn't unreasonably bad. Sure, a bit dull and dry (Trade routes, separatists... What's up with these Prequel-based films centered on issues ripped from a C-SPAN news crawl?), but with enough zip and a liberal ap

plication of Force-like creative invention, a tale ripe with fun possibilities. Too bad ol' George Lucas and director Dave Filoni have gone out of their way to deliver a condescending load of kiddie-pandering tripe. If I follow this pathway it's just going to lead to relentless bile-spewing so let's just do a countdown of the ten worst offences in The Clone Wars:
10) The music is, as previously hinted at, hopeless. However, at least the opening number is a woeful attempt at capturing the magic of the previous films. Past that introduction though, the film is filled with generic (yet trendy) hard-rock guitar chugging non

sense with hints of Middle Eastern melody. It's forgettable at best and infuriating at its worst.
9) The animation, while not horribly offensive, lacks the dynamics to bring these characters to life. I often felt like I was watching a bad episode of the Thunderbirds TV show. No one should have to suffer through that.
8) Rotta "Punky Muffin" the Hutt. Lord knows, everyone loves a wailing infant who makes coo-eyes at the camera every flippin' second. Old Stinky, as he is frequently called 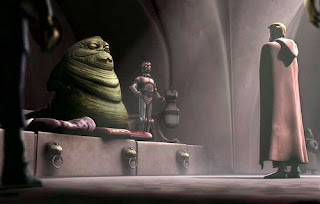 , is the worst kind of offender. A creation who exists only to be "adorable" and sell stuffed toys. I hope Hutt's eat their young and I can be treated to a future viewing of Jabba remorselessly sucking Stinky down his diseased gullet.
7) The action scenes are never-ending. They basically consist of 20 minute barrages of watching swarms of laser fire, wise-cracking droids, explosions and anonymous partakers erupt in flames. I felt like I was watching someone play a really stupid video-game (Though that would be pretty much all of them.).
6) There is no suspense. We know who will live and thus there is no tension is any moments of peril. Will Count Dooku meet a grisly end? Can Anakin survive this unprecedented threat? *Yawns*.
5) Ziro the Hutt (Pictured below-left). A purple, feather-wearing, tattooed and pieced, flamboyant blob with a gay south 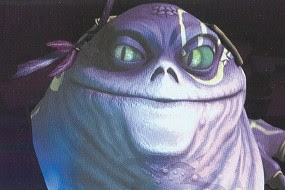 ern gentleman's drawl introduced with sleazy lounge music. It's like Monsieur Lucas read up on all the Jar Jar/Ewok hate and declared "Wait'll they see what I can come up with next!” Every single Ziro scene was met with squeals of disbelieving laughter at my screening. This flaming queen sets homosexual stereotypes back ten years to the days of John Leguizamo playing Chi Chi Rodriguez.
4) A disjointed and often bizarre plot. New plotlines are abandoned and begun at almost random points. And by the 30-minute mark I was so worn down by computer-animated carnage that I didn't really care. I did, however, love Padme's arbitrary introduction and story twist around the 70-min

ute mark. I'd forgotten she even existed. I was slightly troubled by the amount of effort the animators seemed to put into making her booty slammin' on an intergalactic scale. Notice that they never miss a chance to flaunt it either... I can only imagine what was going on in the feverish minds of some of the more... enthusiastic fans.
3) There are few things worse that annoying characters referring to each other with "clever" nicknames. Having Ahsoka refer to Anakin as Sky-guy, while conversely being addressed as Snips was nothing short of eye-rolling.
2) The dialogue. Anyone who complained about the often stolid dialogue in the prequel trilogy should sit throu

gh this clinker, where characters only talk in exposition and bland declarations. "Look out for that missile!", "You woke up the baby!", "Get out of my way!", "We have to save them!", etc. Do people actually get paid for writing this sort of standard drivel? Yup, and well too.
1) Ahsoka Tano (Pictured left-above with Anakin). My lord. Whose bright idea was it to create this abomination of misguided youthful "hipness"? The sass-talk and Valley girl voice apparently weren't distracting enough, so the creative team decided to jailbait-her-up by dressing her in a micro-skirt and tube top, with frequent nipple issues that would make Joel Schumacher weep with pervy gratitude. So, instead o

f being a positive female role-model she's a skanky-looking, irritating wrecking ball of a character who pummels almost every single scene into the ground like a Bantha stampede. That she is arguably the lead character is a sign of how awful this debacle is. Hopefully, she too winds up in Jabba's fodder trough at some point in the near future.
For all the reasons above, plus an ending that is anything but satisfying, it pains me to say that The Clone Wars is a disaster (Minus a somewhat well-staged vertical battle scene, a few cool slow-mo space ship scenes and some nifty Jawa moments). Last year I kicked around Transformers, calling it cynical drivel that exemplified the worst that bi

g studio movie making can vomit up. Well, that's The Clone Wars in a nutshell. It's obvious that no one truly loved making this junk, and so we can be forgiven for hating it in return. The fact that it's a precursor to an impending TV series does little to ease the pain. At this point, I can see very few people tuning in. Myself included.
Remember a few years back when we would fantasize what the Clone Wars were all about? Now that I know, I long for that blissful ignorance. Thanks George, you've had a hell of a summer.