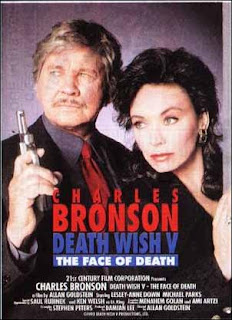 Death Wish V: The Face of Death (or, according to the fine print on the cheap DVD art, "Faces of Death") begins as all films should: with abundant footage of naked models getting dressed intercut with shots of Charles Bronson strutting like Tony Manero down the streets of New York to terrible dance music. Now, you may think gratuitous nudity in the credits is shameless, but don't worry! It all serves a valuable purpose. See, Bronson's character is going to a fashion show overseen by his girlfriend, Olivia (Lesley-Anne Down). Hence, director Allan A. Goldstein isn't aiming to titillate, he's trying to educate by giving us a fly-on-the-wall documentary-like glimpse into the daily realities of this swanky industry. Besides, who are we to question the man's art? Who are we...?

Ultra-classy opening aside, though, The Face of Death is a pretty shoddy affair. Despite being released in 1994, you would be forgiven for thinking it was a straight-to-video cheapo cash-in from the previous decade (which is surprising, as I was always under the impression that any movie featuring a "Special Guest Appearance" by Saul Rubinek must cost a king's ransom). The cinematography is flat and grungy, and I'm not sure the production ever bothered to hire anyone to cover art direction. Although, someone must have dreamed up that bizarre clothing factory warehouse, which came complete with an acid pit and a high-speed conveyer belt that leads into a wood chipper. Are these things common in clothing factories? They must have some mighty insane workers comp cases.

This fifth Death Wish instalment opens with Bronson's vigilante architect Paul Kersey (whose face really does, at this point, resemble the Grim Reaper) settled down in happy domesticity. He has a hot fiancé 30 years his junior, and a soon-to-be stepdaughter (Erica Lancaster) who adores him. But, because the universe loves making a cruel cosmic joke of the poor dope, happiness is again violently taken away from him. His lady love's sadistic (and impotent!) mobster ex, named Tommy O'Shea (Michael Parks - dependably loopy), finds out Olivia is planning to rat him out to the feds. So, to dissuade her, he orders flamboyant, dandruff-plagued hitman Freddie Flakes (Robert Joy) to dress in drag and smash the poor woman's face into a mirror. Repeatedly. Then, just to be a jerk, he waits until she's recovered and returned home before showing up and shooting her off the roof.

Kersey is shattered, obviously, and demands to know why the law hasn't busted O'Shea yet. They put on their sad faces and tell him they've been trying for - wait for it -16 years! Since that's an unacceptable amount of time to spend failing to arrest a man who frequently murders people in broad daylight in front of dozens of witnesses, the ass-kicking senior citizen tells the cops to take a flying leap, grabs his gun and sets out to kill his enemies in wildly over-the-top ways. A task which he accomplishes swimmingly. 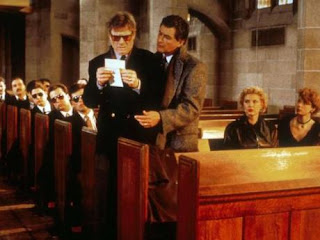 Following the series' previous bombastic entry, The Crackdown(!) - in which Kersey killed approximately 1,692 bad guys - The Face of Death is remarkably subdued and more in tune with the first film. It's nowhere near as good, but there is a conscious effort made to make its hero's battle more small-scale and personal. O'Shea really only has a small handful of goons so, instead of wall-to-wall shoot-outs, the film's runtime deals primarily with the outlandish scenarios Kersey concocts to send his foes screaming into the nether. Poison cannoli, anyone? Or, better yet, how about death by exploding remote control soccer ball? (Speaking of which, did those actually exist? Why would you want a remote control soccer ball? You can't kick it because that would damage the circuitry, and the novelty factor would be remarkably short-lived.) Of course, it all ends with a gun battle in the clothing factory. Gosh, I hope someone remembered to put a lid on that acid pit...

The glorious excess of the villain deaths are The Face of Death's greatest strength, as well as it's most crippling weakness. They're easily the most entertaining part of the movie, but they are so ludicrous that they completely null the film's attempts to be taken seriously. It all results in a tonal mess of a motion picture that, while more watchable than a couple of the other sequels, doesn't congeal into anything of particular worth. After 20 years of wishing gruesome death on the guilty, Death Wish V finally sees Paul Kersey limping off into the sunset. And boy, oh boy, does he ever look tired. 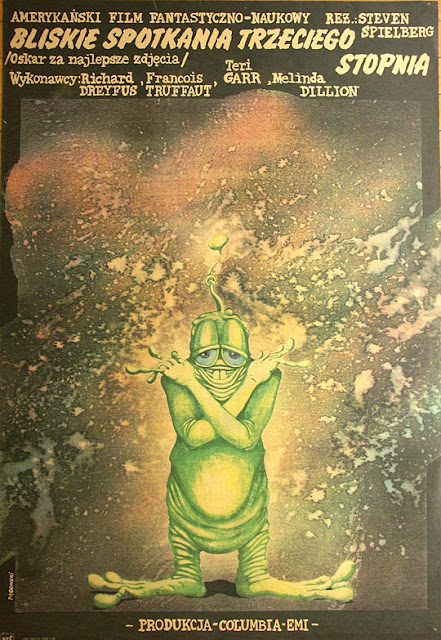 Not all posters featured in this weekly column are winners. Some will be oddities that are so peculiar and wrong-headed that they deserve notice purely for existing. Such is the case with today's kooky-crazy Polish theatrical one-sheet for Steven Spielberg's seminal 1977 science-fiction masterwork Close Encounters of the Third Kind.

Designed by brilliant artist Andrzej Pagowski, this is a classic case of what happens when a painter is asked to depict imagery for a movie they have no frame of reference for. Todd Gresely, director of Monstrose, Houston's Retro Gallery - which ran an exhibit of Pagowski's work in 2007 - said of this bizarro piece that "The government probably said, 'we're getting a movie about aliens, make the poster.'" Thus, the artist conjured up this goofy, green Saturday morning cartoon character with a slightly stoned-looking grin and ran with it.

While there's nothing inherently wrong with the artistry of the one-sheet, it is hilariously off-the-mark. The silly, droopy-lidded alien bears zero resemblance to the extraterrestrial visitors in Spielberg's opus (it's actually closer, physique-wise, to E.T.), and the piece's tone lacks any of the mystery and awe promised by the standard North American poster. Polish audience members could easily be forgiven for thinking they were buying tickets to a children's movie.

That said, I dig the glowing, splattered background of stars and constellations, and the unrestrained weirdness of the design. While not remotely representative of the film, I'll be damned if it isn't still charming in a decidely off-beat way. This one-sheet is pure broad, goofy fun. It's just not Close Encounters.

I would recommend, however, you take a closer look at Pagowski's diverse catalogue of work. There are some truly breathtaking gems to discover. Personally, I love the Wall Street, Patton and Rosemary's Baby one-sheets. Hopefully, I'll get around to featuring some more of this artist's striking efforts here in the future. Under the "Cool" category, of course.
Posted by Cam Smith at 6:15 PM No comments: