Film Review - FIRED UP!: So NOT Worth Cheering Over... 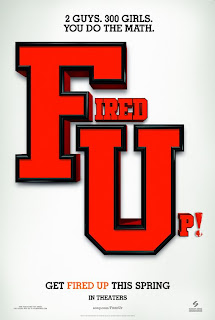 Fired Up! is not a movie that any rational person would give a second glance. The trailers and TV-spots alone heavily implied that it would be a laugh-free ninety-minutes, packed with himbos, bimbos and prat-falling mascots. It looked like complete crap and, perhaps, evidence not only of the dark lord Satan’s existence, but definitive proof that he was active on Earth and working in the moving picture business.

Now, while all of those assumptions are, to varying degrees, correct, there was a lone bright spot. A radiant spark within the desolate abyss that pulled my long-buried sense of optimism to the surface: Mr. John Michael Higgins! 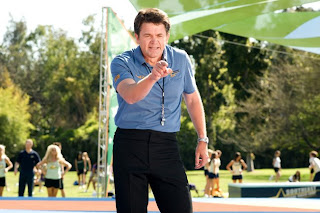 Name doesn’t ring a bell? Colour me unsurprised. While Higgins has, for over a decade, been carving out a brilliant comic career, filling supporting roles in films of wildly differing pedigrees, he unfortunately still remains something of an unknown. With his cartoonishly square jaw and absurdly severe expressions, which often betray a complete absence of frontal lobe activity, the actor specializes in inhabiting ego-maniacs driven by a resolute dedication to their own misguided, idiotic ideals. Whether playing Jennifer Aniston’s karaoke-loving, gay-diva brother in The Break-Up or the cowboy-loving Hollywood agent in Christopher Guest’ 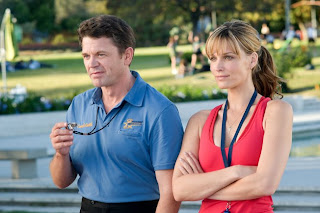 s For Your Consideration, Higgins is a genius at creating characters you’d probably want to punch out if they weren’t so damn charismatic and fascinating.
Which brings us to Fired Up!, a dopey teen comedy which casts Higgins in a key supporting role as Coach Keith, the gung-ho, borderline-deranged leader of Fired Up (think about the acronym) cheerleading camp. Watching Higgins perform spastic dance moves and wave pom-poms with the single-minded intensity of R. Lee Ermey in Full Metal Jacket, the actor is a joy to behold in all his narcissistic glory. Too bad the film isn’t about him.
The real story of Fired Up! is centred on Nick and Shawn, two smug, womanizing High School football jocks – surely a terrible conceptual idea for building any sort of audie 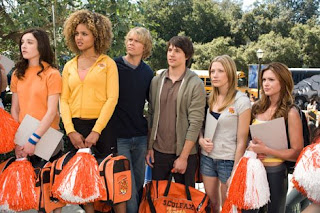 nce identification – who decide to skip out on football camp in Texas and instead enrol at F-U (ha...ha.), with the sleazy intentions of racking up as many cheerleader points as humanly possible. While Nick (Eric Christian Olsen – think Jim Carrey crossbred with Owen Wilson) cuts a lusty swath across the campus, Shawn (Nicholas D’Agosto – imagine Superman Returns’ Brandon Routh interbred with, er, Owen Wilson...) begins to fall for the cheerleading team’s smart, sassy leader Carly (Sarah Roemer). Wouldn’t you know it though, Carly has a goony, evil boyfriend, self-named Dr. Rick (David Walton), who threatens not only the two kids’ blossoming romance, but also the team’s chances to win the big cheerleading exhibi 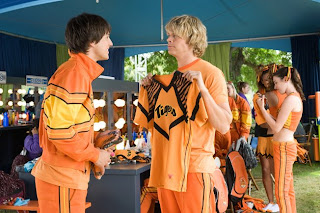 tion! Whatever will they do? Like you don’t already have an idea!
Reading over the plot of the film, you can probably easily connect-the-dots from cliché to cliché, and watching the flick is no different. Fired Up! is the generic type of movie that, if given just a slight twist by the filmmakers, could be a pretty good satire and hilarious entertainment. But they don’t. And it isn’t.
Of course, that isn’t to suggest that a game few don’t struggle, with considerable flop-sweat, to overcome the Alcatraz-like imprisonment of Freedom Jones’s stupid script. Eric Christian Olsen, who oddly enough is actually over the 30-year mark, tries valiantly to give h 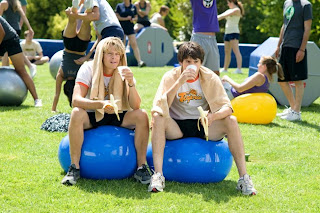 is dim witticisms some zing through weird speech rhythms and goofy physical gesticulations. While he doesn’t succeed in making Nick particularly likable, I wouldn’t be averse to seeing him get future comedy work. Similarly, David Walton, as the jerk boyfriend, is an over-the-top hoot in a few scenes, fervently singing along to Chumbawamba’s “Tubthumper” and always appearing to be in constant peril of bursting blood vessels. And, of course, Higgins kills in his few scenes of ecstatic prancing grandeur.
The ladies fair far, far worse due to the fact that they are all playing half-dres 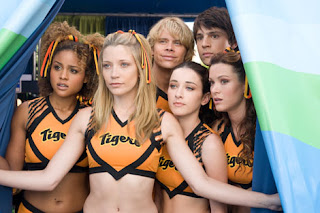 sed, brain-dead automatons with catty tendencies and inclinations for sporadic lesbianism. Lead actress Sarah Roemer has sort of a cute, spunky Kate Hudson thing going on, but she isn’t given a single clever line, while the massive female cast only has one humorous scene, watching an outdoor projection of Bring It On and, in unison, robotically reciting every single line of dialogue.
Throw in the film’s lazy use of its soundtrack songs to create emotion – pop-punk music in party scenes, The Jackson 5’s “ABC” for wacky montages – as well as its rampant product placements an 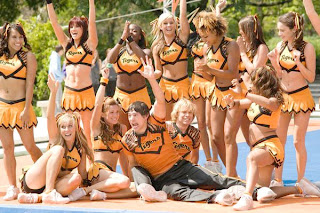 d complete lack of comprehension for staging believable cheerleading routines, and you have a pretty dead fish on your hands. I’ll continue my unyielding support of John Michael Higgins however and, judging from the copious credit outtakes, it appears that he and the rest of the cast had a great time making Fired Up!. Too bad we have to watch it. F-U, indeed...
2 out of 5
*Originally printed in SFU's The Peak: March 2nd, 2009.
Posted by Cam Smith at 4:35 PM No comments: