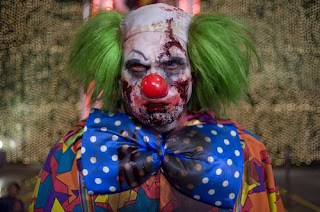 The hiatus is over, and the Epi-Cast has risen up from the apparent dead, like a salivating soul-sucker creeping out of a freshly dug grave. However, rather than drain your body of lifeforce, the Epi-Cast only yearns to siphon your frontal lobes of smart-juice, through an ever-reliable mixture of rambing film discussion and general rambunctiousness! Hail we, who podcast from a basement!

In this most spanking of episodes, Cam and Tom grab their trusty chainsaws and shotguns and go to work on both the Woody Harrelson splatstick hit Zombieland and the Diablo Cody ghoul-girls-gone-wild dud Jennifer's Body. They also catch up to speed with reviews of Shane Acker's animated film 9, Clive Owen's The Boys Are Back, Matt Damon and Steven Soderbergh's The Informant! (A no-prize awaits whoever can guess which host fell asleep!) and the Paul Gross-starring/directed Canadian war epic Passchendale. It's also a juicy Trailer Park Encounters segment, with coverage of the no-doubt future Oscar nominee Up In The Air, the no-doubt future Scream Award nominee A Nightmare On Elm Street, the no-doubt future Razzie Award nominee The Blind Side and, um, From Paris With Love. Goddamn, this is one tasty episode!

To download, simply right-click and save on the green episode title above. Then you are free to indulge in one of the interweb's finest wonders.

P.S. We are also available on iTunes! We kid you not! Simply do a store search for "Epi-Cast" and, ELECTRO-MYSTERIO!, you can subscribe to our feed and receive insta-dl's (Net speak for downloads). Oh, and we are the "Epi-Cast", not the "Epicast". Avoid those pretentious fools like the flesh-eating plague.
Posted by Cam Smith at 4:56 PM No comments:

Film Review - THE BOYS ARE BACK 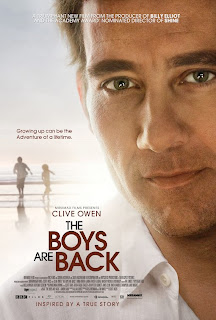 Sometimes it only takes a dash or two of big-time movie star charisma and directorial verve to make the wheeziest of cinematic prospects crackle with authenticity and energy. Such is the case with The Boys Are Back: an amiable, Australia-set family drama involving a recently widowed sports writer’s unconventional journey towards responsible single-fatherhood, which should, theoretically, be almost unbearably gooey and corny, but is instead a genuinely audience-pleasing addition to the already considerable “reluctant parent” genre. Chalk it up to director Scott Hicks, who previously explored the complexities of father/ son relationships to great effect with 1996’s Oscar- scoring Shine, and an atypically warm Clive Owen — subduing his usual on-screen knack for brooding animal magnetism — for putting their collective talents together in the service of something simple, irony-free, and surprisingly endearing.

Owen’s Joe Warr is an undeniably flawed individual when we first come across him, a somewhat distant father and husband, whose jet-setting lifestyle depends heavily on the thankless efforts of his wife Katy (Laura Fraser), who acts as primary care-giver to their challenging six-yearold mopp

et, Artie (Nicolas McAnulty). However, after Katy succumbs to the ravages of terminal cancer, both of the surviving males find themselves at a grief-stricken loss, unable to truly communicate with each other, and emotionally isolated from those around them. In an effort to coax the boy out of his shell, Joe adopts a “Just Say Yes” policy, dubbing their house “Hog Heaven” and allowing for almost complete liberation from rules and responsibilities. 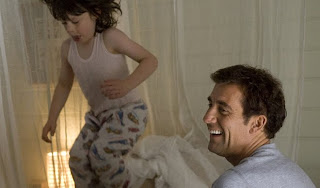 ake), who is both his closest confidante and most headstrong adversary, as well as a pretty young local woman named Laura (Emma Booth), who helps teach Artie’s elementary school class, it quickly creates a bond between the two Warr men. It also lures Joe’s London-based teenage son Harry (George Mackay), an oft-ignored product of an earlier marriage, back into his life — an added personality dynamic which threatens to topple the idyllic unruliness of “Hog Heaven” and forces him to become a stronger and more responsible role model and human being.

While this may all sounds like a drippy voyage into the nether-regions of Movie-Of-The-Week Hell, Hicks — a consummate professional finally back on the ball after a hard decade spent dragging musty Awards-bait fodder to the screen — battles the potential pitfalls of the material at every turn. Working with Alan Cubitt’s refreshing script, adapted 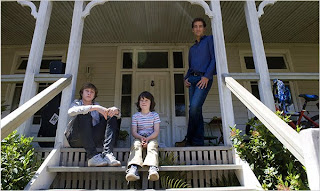 from Simon Carr’s memoir, the director shows a sharp eye for avoiding the most irritating conventions: consider the relationship between Joe and the adorable Laura — a development that would seem to hint at hoary romantic melodrama — which is allowed to progress naturally and tenderly. These people have too much on their respective plates for a full-bore head-inthe- clouds love story, and the filmmakers respect their characters too much to crassly concoct one in order to sell tickets. They also show admirable restraint in the conversations between Joe and his deceased wife: these are moments which are portrayed in a recognizably grounded reality as opposed to being accompanied by soft lighting and histrionic strings.

Owen has rarely been better or freer, hiding his sorrows behind held-back tears and alcohol, while simultaneously radiating giddy excitement at each of Joe’s new breakthroughs. Upon disc 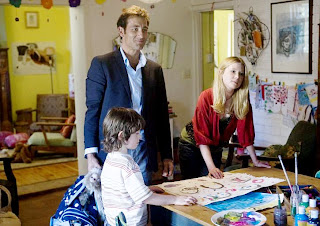 overing, early on, that his younger son has converted a hotel hot tub into an indoor water-park, the actor’s eyes run the gamut of emotions, from shock, to disbelief, apprehension, acceptance and, finally, unbridled joy, spelling out all we need to understand Joe’s transition into a champion of domestic disorder. He provides a perfect foundation for his energetic young co-stars to bounce off of, allowing for natural, affectationfree performances. Mackay in particular has one shattering blowout of a scene, stemming from a dispute over an un-emptied garbage bin, which is an emotionally devastating showstopper.

Dramatics aside, The Boys Are Back is also a flat-out wonderful looking feature, filled with sun-kissed Australian scenery captured in all of its awe-inspiring splendour by cinematographer Greig Fraser. In a voiceover, Owen reports that when mapping 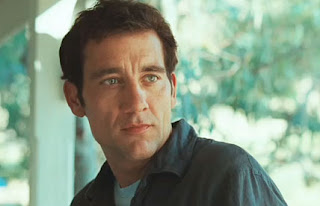 the human brain, an adult’s mind reveals symmetrical flat lines, while a child’s is all zigzags and unpredictability. This insight not only informs Joe’s yo-yo-like trip between adulthood and childlike abandon, but also the film’s many gorgeous visual motifs, with the stark, flat horizons contrasted against turbulent ocean waves and craggy rock formations. Fraser’s work is a radiant character unto itself and warrants notices in the impending Awards season.

If you’re willing to surrender to the movie’s leisurely pace, which, it must be said, unravels a tad during the continent-ho 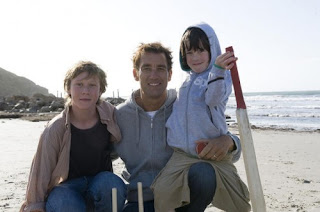 pping third act before wrapping up in cheerily expected fashion, there is much to admire and, indeed, love about it. The Boys Are Back doesn’t aim for flashiness or innovation, but it is honest, heartfelt and, most importantly, it works. And sometimes that’s all that really counts.