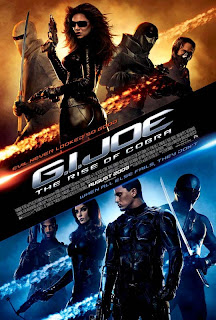 Remember those Hasbro G.I. Joe toy commercials from the mid-eighties? The ones with that hyper-active kid laying by a small, perfectly constructed, picture-esque stream, surrounded by a small fortune’s worth of 3¾ inch plastic characters and massive, ungainly, missile-firing vehicles, ecstatically spouting out combat noises (“KCH-POO!” “UH-UH-UH-UH-UHHH!”, “CCCHHHH-KUH!”) and smashing his beloved possessions through piles of small, see-through blocks? I know I do and, based on the evidence at hand in G.I. Joe: The Rise of the Cobra, director Stephen Sommers sure does too, for he has crafted nothing if not the dopiest and most extravagant action-figure advertisement of all time. And I mean that in perhaps the best way possible.

Unlike Michael Bay’s bloated and insincere Transformers: Revenge of the Fallen, a tonal mess, which attempted to approximate adolescent giddiness through misogyny, mean-spirited violence and potty humour, Sommers' film is goofily earnest to a fault, illustrating an e 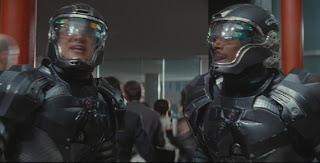 pic tale of good vs. evil with all the verve and intellect of a 10-year-old male subsisting on an endless nutrition-free diet of video-games, Saturday morning cartoons and James Bond and Star Wars movies. It’s the type of flick where Dennis Quaid can gruffly shout “release the sharks”, free of pesky irony or self-awareness, and clashing opposite-coloured ninjas icily refer to each other as “brother” (All the characters in G.I. Joe share freakishly coincidental interconnecting back stories, covered in countless cornball flashbacks which open and close with characters staring dramatically into space, which seem to imply that the screenwriters are huge fans of Paul Haggis’ Crash). Did I mention there’s also a robotic tracking device disguised as a fish? Or a jet which only responds to voice commands? In Gaelic? Well, there is, dammit, and although the film they’re haphazardly stuffed into isn’t any good by accepted critical standards, there is an almost admirable purity to be found in its aw-shucks, blow-em-all-up idiocy. G.I. Joe may be crappy and campy, but it’s also an almost pitch-perfect translation of the absurd, one-dimensional property which spawned it.

Rise of the Cobra’s story can be summed up in a single sentence: the good guys have to stop experimental metal-consuming nano-tech missiles from falling into the hands of bad guys, who would use them to take over the world. How or why is not important. What is of central concern, though, is that the main good guys are Duke and Ripcord (Every char 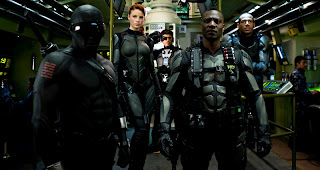 acter in this film has apparently eschewed traditional Christian names in favour of bad-ass monikers.), played by a wooden Channing Tatum and, um, Marlon Wayans. They’re a couple of top-shelf army rangers who blunder and worm their way – rather easily, it must be said – into being recruited into the G.I. Joe task-force, an internationally made-up team of super soldiers operating from a secret subterranean base in the deserts of Egypt. Overseen by the crusty old warhorse General Hawk (Dennis Quaid), the team also features the silent ninja warrior Snake-Eyes (Ray Park), the British arms expert Heavy Duty (Adewale Akinnuoye-Agbaje), communications genius Breaker (Said Taghmaoui) and the impressively pneumatic Scarlett (Rachel Nichols – doing her noble part to help single-handedly launch a new generation of young boys into the throws of puberty).

Despite being the new guys on the team, Duke and Ripcord are almost immediately thrust into leader-ship type roles, tasked with preventing the all-important WMDs from

falling into the hands of the seductive, dominatrix-lite Baroness (Sienna Miller – wearing regalia that suggests that Victoria’s Secret may in fact have a separate catalogue for evil mercenaries), master-of-disguise Zartan (Arnold Vosloo) and the evil ninja Storm Shadow (Byung-hun Lee). They, in turn, are working for the slimy Scottish arms merchant McCullen (Christopher Eccleston – acting through an accent which makes Mel Gibson’s Braveheart brogue feel restrained), who is so uncompromisingly evil that he also employs a sinister deformed scient

ist named, simply, The Doctor (Joseph Gordon-Levitt), who has created an army of nano-injected, brain-washed mega-storm troopers. As these colourful baddies repeatedly clash with the no-nonsense Joes, by land, sea and air, for the fate of the free world, we are treated, in place of a story, to a continuous demonstration of the best computer-generated effects possibly imagined circa 1997 (this includes a cameo by a first-gen Coca-Cola™ polar bear). Certainly CGI Joe: There Will Be Explosions would have been a more apt title.

In spite of the often gaudily unfinished effects work, exemplified best by the expansive exterior shots, such as the sandy landscape outside the Joe’s base and the underwat

er sprawl of the villains’ headquarters, which resemble the shiny, polygon-rendered environments of a Turok: Dinosaur Hunter game level, the film’s action sequences still manage to build up a suitably enjoyable intensity. There is a chase through the streets of Paris featuring Duke and Ripcord, wearing Halo-like “accelerator suits”, and accompanied by a nimble Snake-Eyes and motorbike-jumping Scarlett, tearing after a multi-weapon-firing truck, that is impressive for both its scale and the stunning amount of collateral damage it accumulates. Later, Sommers’ rips a page from George Lucas’ Return of t

he Jedi playbook, with a ludicrous three-pronged assault on McCullen’s underwater base - which is seemingly still under construction considering the ever-present blow-torch wielding workman looming in the background of almost every interior shot - that includes two warring fleets of attack-submersibles (I have no idea how the Joe’s transported their forces to the Arctic – where ice sinks, apparently - so speedily), violent gun battles and a sword-slashing ninja mêlée. Heck, there's even a tacked on bit, with Ripcord chasing runaway missiles, that is an almost exact recreation of the climax of Moonraker. It’s goofy and unnecessarily violent stuff to be sure, but it’ll play like gang-busters to youngsters and those able to regress in maturity level for 120 minutes.

To Sommers’ credit, most of his actors are on-board with his cheesy vision, cranking up the lunacy of their performances to 11 and beyond. Quaid winces and frowns with aplomb (possibly reliving the traumatic experience of signing his three-picture con 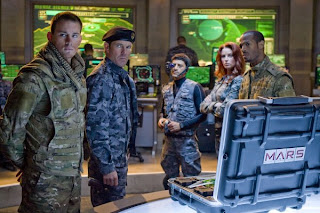 tract), Sienna Miller vamps it up like a Hell’s Angels vixen-gone-wild and a gloriously flamboyant Joseph Gordon-Levitt croaks and guffaws through a death-metal growl. Rachel Nichols, whose Scarlett is the latest graduate from the Denise Richards University of Dubious Intelligence, spouts her inane pseudo-scientific dialogue with bubble-headed pep and jogs in a sports bra like nobody’s business. In arguably the film’s ultimate scene of coo-coo for Cocoapuffs logic, Nichols and Said Taghmaoui stick large electrical spikes into a dead bad-guy’s head in order to download his memories and make photographs from them. Yes. They then, utilizing a picture of a shadow as a reference point, pin-point the location of his headquarters by using “spherical trigonometry”. I felt like hugging someone when those precious two words were uttered.

When it’s all said and done, and the titular cobra has indeed risen (though, curiously, neither Nichols or Miller are responsible for this occurrence), and left the door gaping wide-open for the inevitable sequel, it’s hard not to feel a pang of desire for whatever stupid juvenile delights Sommers’ has left 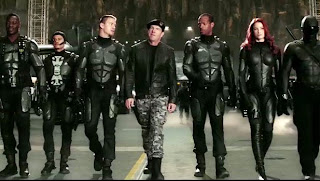 up his fromage-scented sleeve. G.I. Joe: The Rise of Cobra is as synthetic as the butter on your movie theatre popcorn and as dumb as a Dolph Lundgren film festival. However, for sugar-addled kids or those seeking to relive the endearingly bald-faced tackiness of the original cartoon show, or, more likely, derive sardonic amusement from it, G.I. Joe is just the ticket for you. Sometimes, it`s nice to know that, just when blockbuster action movies couldn`t get any sillier, G.I. Joe is there. Yo, Joe!

*This review was sponsored by the good folks at Toys "R" Us.
Posted by Cam Smith at 1:22 AM 3 comments: