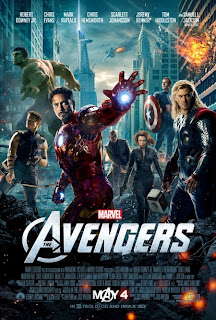 “Everybody loves a hero. People line up for them, cheer them, scream their names. And years later, they’ll tell how they stood in the rain for hours just to get a glimpse of the one who taught them how to hold on a second longer.” - Aunt May, Spider-Man 2.

That wonderfully sentimental and corny speech from Sam Raimi’s sensational 2004 Spider-Man sequel ran through my head a number of times during The Avengers, Marvel’s utterly entrancing, gargantuan-scaled super-team extravaganza. This is a picture that implicitly recognizes the underlying importance these brave, colourful crusaders hold as durable pop-culture icons; they’re gods among men (and women) who reflect both our worst insecurities and noblest human ideals. These heroes may bicker with one another, and suffer from self-doubt, fear or narcissistic pride, yet they endure in order to perform courageous sacrifices in the name of the greater good. It’s an inspiring, ageless notion, and this fist-pumping, chill-inducing entertainment merrily milks it for everything its worth. 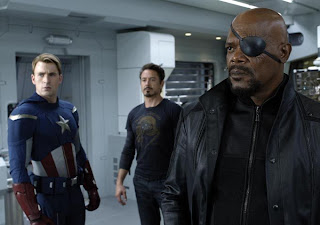 The spectacular culmination of five years of build–up stretched across a series of solid, if safe genre entries – Iron Man and its sequel, The Incredible Hulk, Thor and Captain America: The First Avenger – Joss Whedon’s The Avengers practically explodes with energy, wit and enthusiasm. The fan-adored writer/director not only sticks the landing of this grand undertaking, he’s crafted the very best of the Marvel movies; a blockbuster in the most thrilling sense of the word that respects the viewer and delivers exactly what it promises and so much more. Every year we see so many obscenely expensive Hollywood tent-poles that accomplish little more than numbing displays of special effects and chaotic violence. This one gets it right. In spades.

It also wastes no time getting moving. The action is underway immediately, as disgraced Asgardian Loki (Tom Hiddleston – more serpentine than in Thor) arrives on Earth via an inter-dimensional portal and lays waste to S.H.I.E.L.D. headquarters, seizing the Tesseract, a glowing cube of limitless power, in the process. After a vehicle-demolishing pursuit through the desert, the covert bureau’s chief, the eye-patched Nick Fury (Samuel L. Jackson at his Samuel L. Jackson-iest) realizes the only way to stop the petulant wannabe ruler is to dust off the abandoned Avengers Initiative – a classified program that would assemble earth’s mightiest heroes into a formidable planetary protection agency. 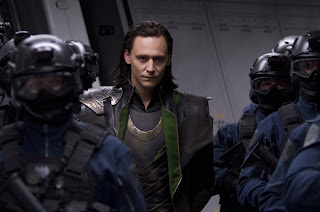 When Stan Lee and Jack Kirby created the Fantastic Four in 1961, they revolutionized superhero storytelling by exploiting the group’s dysfunctional family dynamic – an element that plays a critical role in the triumphant success of The Avengers. There’s a real sense of discovery to the film, as we watch these heroes we’ve come to love individually learn about one another and develop compelling relationships. Harnessing the strengths that made Buffy the Vampire Slayer and Firefly so beloved, Whedon’s crackerjack script masterfully juggles its characters and generates intriguing conflict and hilarity from their interactions; such as Stark’s touching and funny bromance with Banner and frustrated dealings with grown boy scout Rogers, Romanoff’s wounded professional bond with Barton, or Thor’s strained familial link with his indignant, vengeful brother. Not unpredictably, the helmer’s trademark ear for quotable dialogue is the film’s true secret weapon. Whereas so many summer movies seem to go out of their way to keep the conversations generic and to a minimum, this picture is a joyous celebration of comic booky language, from Downey’s quirky quips to Hiddleston’s viciously bombastic threats. Heck, even the ever-earnest Captain America delivers a zinger or two (“I know that reference!”). 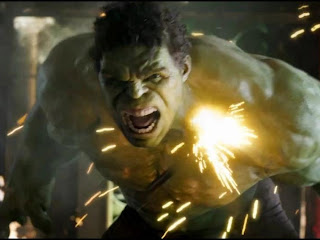 Where the writer/director really surprises, however, is in the action department. Although Serenity showed he had a competent eye, The Avengers is a complete revelation. The picture boasts no less than three brilliant set-pieces in its first half, and the final 45 minutes is a go-for-broke orchestra of city-smashing, pyrotechnic-fuelled superhero theatrics that packs more thrills and ingenuity than all of Michael Bay’s trashy Transformers epics combined. Because Whedon cares about his costumed protagonists, he never lets their individual personalities fall victim to the wall-to-wall CG and gives the clash momentum and narrative coherence. Instead of noisy pandemonium, the extended battle is a rousing tapestry of character-driven money-moments, each of which tells their own fun little story (my favourite of which closes with a post-skirmish unspoken exchange between Thor and Banner’s green goliath alter-ego) and build to a logical conclusion. Furthermore, the filmmaker has finally solved the previously nagging Hulk problem, utilizing him not as a driving force but as a raging punctuation mark to end segments with a glorious bang. The audience I saw the film with loudly applauded the angry, muscle-bound oaf’s smash-happy antics on multiple occasions.

Perhaps motivated by friendly competition on set, each actor brings their A-game to Whedon’s material. Downey Jr. has the heaviest lifting to do – if only by a fraction – and again reminds us why he’s one of the top charismatic stars working today, and Evans and Hemsworth continue to prove that they were indeed the perfect candidates for their respective roles. Wild card Ruffalo, who had the unenviable task of taking over from Edward Norton, winds up being the most engaging on-screen Banner; he’s a charmingly introverted portrait of weary reluctant heroism. Playing the two non-special-powered Avengers, Renner, as in Mission: Impossible – Ghost Protocol, is a commanding physical performer while Johansson, so terribly blank and unnecessary in Iron Man 2, bites into her considerably improved role here with butt-kicking relish. Of course, a superhero adventure is only as good as its villain, and Hiddleston – who has proven to be among Marvel’s biggest casting victories – is a magnetically malevolent presence here, communicating Loki’s crippling emotional hurt even in the midst of brutal murder. 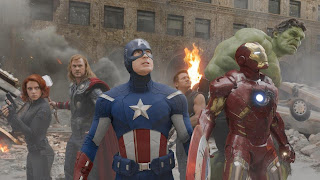 Honestly, it is astonishing how well this picture works considering the crushing burden of expectations and convoluted back-story heaped on top of it. Nonetheless, Whedon has crafted an extraordinary cinematic ride that leaves you breathless, grinning and desperate to dive into the next awesome chapter (which is, true to company form, teased in a terrifically geeky mid-credit scene). For Marvel Studios, The Avengers was long a cause worth believing in. Thankfully, their faith has been rewarded, and the high-spirited results are a cause well worth celebrating!