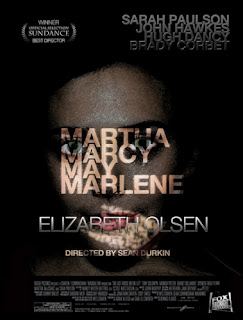 Martha Marcy May Marlene is a truly uncomfortable, fear-soaked experience. A chilling examination of the fragility of the human psyche, viewed through the vulnerable eyes of an irreparably damaged woman who has forgotten what it even means to be human, this cult survivor tale mercilessly drags the audience down a numbing spiral of sadism, abuse and sorrow. However, those able to brave the ominous, upsetting journey will be treated to the most terrifyingly plausible horror movie of the year.

The picture stars Elizabeth Olsen as Martha, an attractive, quiet and troubled 20-something, who – in a moment of rebellious strength – flees the constricting confines of a fundamentalist cult. Alone and without any resources, she reunites with her estranged sister Lucy (Sarah Paulson) and her husband Ted (Hugh Dancy), and is invited to their posh, remote summer home to mend. However, the idyllic scenery and familial support do little to calm Martha’s shattered nerves, and she soon begins reliving tormented memories of being systematically broken down by her former master Patrick (John Hawkes). As Lucy and Ted struggle to comprehend their loved one’s bizarre, erratic behaviour and moods, Martha finds herself slowly becoming trapped inside an inescapable prison of crippling paranoia. 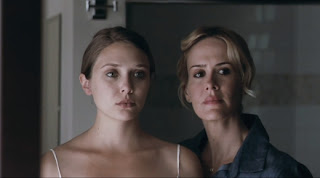 Viewing the film, it’s impossible not to be shaken by the omnipresent sense of dread hanging over the proceedings at every turn. Martha Marcy May Marlene is a skilful exercise in unrelenting suspense, and writer/director Sean Durkin – making his feature film debut – impressively sustains the film’s unnerving tone throughout. He and cinematographer Jody Lee Lipes have created a gorgeously ugly-looking picture, teaming with foreboding atmosphere, which feels eerily reminiscent of Wes Craven’s uncompromising early efforts. They’ve stripped away all beauty and serenity from their locations, allowing us to familiarize ourselves with the alienating, comfortless world Martha’s become lost in. Heck, even Lucy and Ted’s luxurious summer house is all but swallowed up by the bleak, Herzog-ian forest surrounding it.

As commendable as the direction is, though, all might have been for naught if Durkin hadn’t found his crucial lead actress. Newcomer Elizabeth Olsen is, simply put, a revelation. Frequently silent, she brings a raw, wounded defencelessness to the role that’s difficult to watch at the best of times, and downright distressing in the more sickening scenes of cult brainwashing. While we know nothing about Martha’s past, we empathize and genuinely care for her, and it’s painful to see her being exploited. In her scenes with Paulson and Dancy, she masterfully walks a fine line between childlike innocence and frustrating obliviousness. We sympathize with their aggravation – such as when Martha climbs into their bed during a late night romantic session – yet completely understand why Olsen’s character would behave in such an odd manner. Pay close attention to the film’s last, and very best, scene, where the camera lingers intensely on Olsen’s face and she wordlessly communicates all we need to know about Martha’s foreseeable future. It’s haunting work. 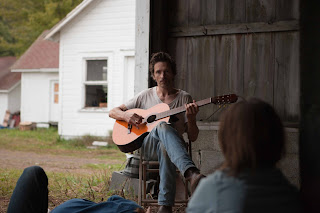 Just last year, in his Oscar-nominated turn in the wonderful neo noir Winter’s Bone, John Hawkes created an unforgettably menacing lowlife you couldn’t imagine ever approaching. Here, he does something trickier; he makes his nasty cult leader so charming and persuasive that you can’t help but be won over by him initially. Hiding his aggressive, manipulative nature behind an appealing mask of soft-spoken flirtatiousness and laid-back cool, Patrick is an exceedingly loathsome villain and Hawkes again delivers tenfold. We witness the slow emergence of his true self – transitioning from a loving, guitar-playing father figure, entertaining his flock with soulful impromptu ditties, to a heartless sexual predator – right alongside Martha and it’s a riveting, bloodcurdling sight to absorb.

It’s too bad Durkin’s screenplay doesn’t flesh out the rest of the cast as well as Olsen and Hawkes’ characters. Sarah Paulson and Hugh Dancy have strong chemistry, both together and with Olsen, but their roles feel underwritten. An argument could be made that Durkin wanted us to share Martha’s lack of personal connection to them, but at a certain point we’re supposed to invest ourselves in their plight and it doesn’t quite click. You can’t expect an audience to become concerned with the fate of two undefined people they never really get to know. Similarly, it would have been nice if some of the other cult members had been given dimension. As it stands, they’re mostly glorified extras devoid of interesting characteristics. 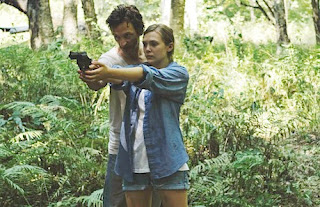 Still, Martha Marcy May Marlene’s slight script deficiencies are easily overshadowed by the measured power of Durkin’s direction and the two gangbuster central performances. This is a film guaranteed to crawl under your skin and remain trapped there – existing forever alongside the most indelible on-screen horror images you’ve bared unfortunate witness to. Consider this review a fair warning. And an enthusiastic recommendation.
4 out of 5

*Originally published at Converge Magazine.
Posted by Cam Smith at 12:14 PM No comments: