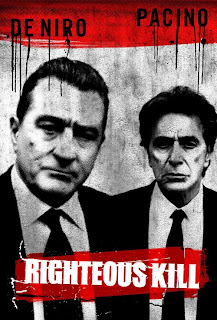 I’m pretty sure that director Jon Avnet is in leagues with the Dark Lord himself. And not the seductive, amiable type like Harvey Keitel in Little Nicky or Jack Nicholson in The Witches Of Eastwick, either. No, I mean the serious Tim Curry-in-Legend-type of badass who hates us all and yearns to make mankind (and Tom Cruise) suffer beyond all comprehension.

How else to explain how Avnet, after conjuring up box-office duds with Kevin Costner, Richard Gere and Robert Redford, was allowed to escape TV purgatory and direc 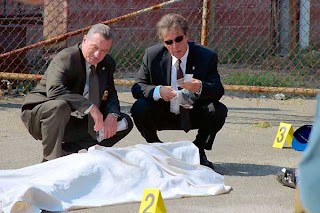 Set in gritty New York, Righteous Kill clumsily starts off by introducing us to two veteran homicide cops nicknamed Rooster (Pacino) and Turk (De Niro), who are out to bust a gangsta drug-dealer played by, *sigh*, Curtis “50 Cent” Jackson. However, just as their investigation into the dealings of Mr. G-Unit, 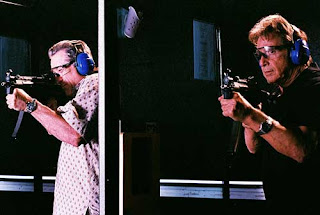 Right off the bat, Righteous Kill knee-caps itself by revealing what a wasted opportunity it is. De Niro and Pacino are the most treasured actors of their generation, who have only appeared in two films together, The Godfather: Part II and Heat, and only act 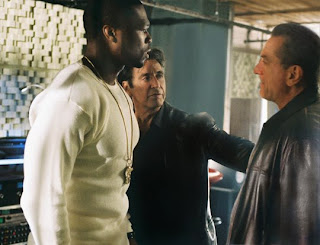 ually shared scenes in the latter. Any film that pairs the two of them together better earn their presence. Yet instead, Avnet and writer Russell Gewirtz (Who wrote the infinitely cooler Inside Man), saddle the two greats with buddy-cop dialogue so awful that your soul dies a little bit just hearing it. I’m talking Brady Bunch references and icky, awkward sex chat. They feel less like partners than tired actors sleepwalking their way through the scene on the way to the catering truck.

What is even worse is how amazingly dull the whole mystery is. We’re told right away who the guilty party “supposedly” is, and then must slog through ninety lifeless minutes watching this person do everything they can to look blameworthy, before being exonerated in an arbitrary last minute twist that defies all the evidence the film has provid 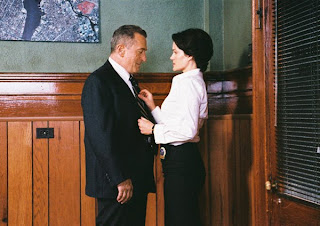 ed. Real storytellers hide clues right in front of you and weave their mystery with skill and precision. Hacks like Avnet and co. put on kid-gloves and treat the audience with contempt.

If only the cast had gone gonzo with the lame material. De Niro, looking comically bloated, relies on grimacing his way through every single scene, while Pacino does his typical world-weary routine (except in a hilarious climactic moment when his stunt double steps in and he turns into a coiled jungle-cat).

Poor Carla Gugino tries valiantly, but her role is so needlessly degrading as to be offensive. Supporting players Leguizamo and Wahlberg seem to be on downers, and manage to appear more lethargic than the stars, though Wahlberg does have one good memorably awful moment wondering aloud “is he killing time? Or is it... killing time?”

There is, in all honesty, not a single thing I can recommend about Righteous

Kill. It’s amateurishly shot, tedious and ugly, with as many holes as Pacino wore at the end of Scarface. I beg you, avoid this sucker like Maple Leaf deli meat and help send the malevolence known as Jon Avnet back to whence he came. It’s the righteous thing to do.

*Originally published in SFU's The Peak: Sept 22nd.
Posted by Cam Smith at 3:45 PM No comments:

Film Review - BURN AFTER READING: Plenty Of Smoke, But Not Much Fire. 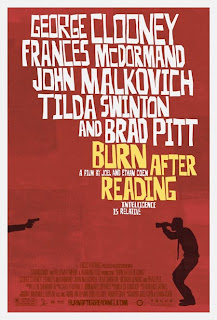 Hello all. If you don’t mind, I’d like to preface my review of Joel and Ethan Coen’s latest film, Burn After Reading, with a joke that will hopefully tickle your funny-bones.

So, a guy walks into a bar. It’s in Chicago, and it’s raining hard outside. Now, the guy is wearing a gray overcoat, with a battered fedora and nerdy glasses. He’s an accountant. Anyways, the guy takes off his coat and hangs it on a crooked coat-rack and walks up to the bartender, who’s about 60. The bartender is nervously reaching for the tel 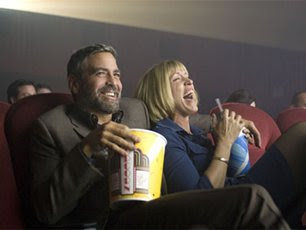 ephone, but the guy doesn’t see that. So, the guy looks at him and says: “What do you recommend for a wet accountant?” The barman looks him up and down, and says “whiskey on the rocks”. The guy drinks it and leaves.

The above anecdote best explains how I felt walking out of Burn After Reading, an anarchic ensemble comedy that jerks and shoves the audience through a litany of plot twists and turns only to deposit them, breathless and impatient, back into their seats, pat them on the head and inform them that the punch–line is that there isn’t one. Thanks for coming folks, don’t forget your jackets on your way out.

Burn After Reading relies more on a complex scenario than a plotline: a recently unemployed CIA agent named Osborne Cox (John Malkovich) has heatedly retired from the spook game and decided to write his memoirs. This decision exasperates his icy wi 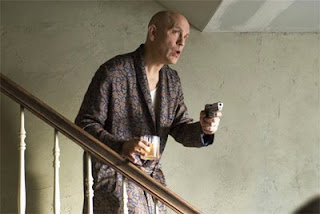 fe, Katie (Tilda Swinton), who has been conducting an affair with married serial philanderer/treasury agent Harry Pfarrer (George Clooney) and is determined that each of them divorce their current partners in the interest of a more socially acceptable union. Meanwhile, Osborne's book project has turned into an vengeful expose of his former employers. In preperation, he has created a CD-ROM of top-secret figures and statistics which, through fateful circumstances, ends up in the hands of dense personal trainer Chad Feldheimer (Brad Pitt) and vain, insecure Linda Litzke (Frances McDormand), employees of a local gym called Hardbodies.

Through an unimaginable series of absurd coincide 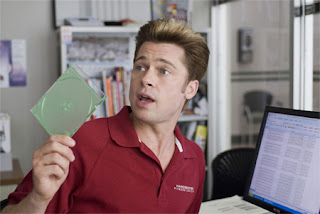 nces involving the aforementioned CD, as well as torrid affairs, each of these characters find themselves, often obliviously, caught up in a seemingly high-stakes game of espionage that makes so little sense that the Coens provide a pair of G-men, played by J.K. Simmons and David Rasche, to lend voice to the audience’s bewilderment.

Now, this isn’t the first time that the Coen brothers have played around with the concept of randomness and meandering narratives. Remember that the duo won Oscars last February for the brilliant No Country For Old Men, a far deeper and challenging film than Burn After Reading. More importantly, however, they were the masterminds behind the 1997 cult-classic The Big Lebowski, which introduced us to the Dude (Jeff Bridges), and plugged him into a film noir plot that was as hazy as his own mindset. Well, Burn After Reading can best be described as a less-ambitious Lebowski with spy-thriller conventions and unlikably needy characters.

Still, there are a few delights along the twisty way. Brad Pitt, an actor whom, despite his popularity, often se 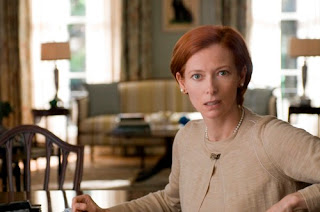 ems as lively as balsa-wood on screen, is having a ball here and makes Chad a dim-wittedly brilliant creation. Most of the laughs in the film result from his delirious idiocy, especially in a goofy scene with Malkovich in a car, where Pitt tries to intimidate the furious former agent with ludicrous eye-squinting and tough-guy attitude. Pitt is fully committed throughout, and I found myself having flashbacks to his ace comedy-relief in True Romance. Someone get this guy a meeting with Judd Apatow, stat!

Equally amusing is J.K. Simmons, who you’ll recall from Juno and the Spider-Man series, as the befuddled CIA supervisor who, in two gang-buster scenes, mutters and shakes his head in disbelief over the increasingly jumbled plot developments.

I was also amused by the musical contributions of Carter Burwell, who over 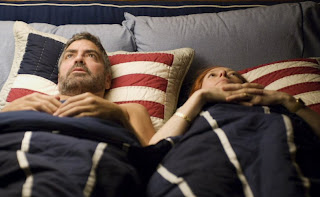 But aside from these simply joys, I found myself blankly staring at an often lifeless patch-work of missed opportunities. It seems as though the Coens, so intent on crafting a droll cinematic F-U to the audience forgot to write anything very funny for their all-star cast to say. Pros like McDormand, Malkovich, Swinton, Richard Jenkins and Clooney are working hard, but haven’t much witty to say or do. And the mid-film int 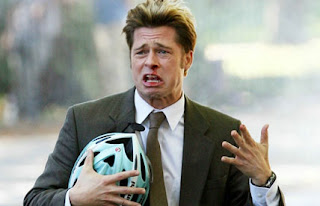 roduction of a particular... apparatus is amusing, but missing the necessary punch to make it classic.

It’s kind of dispiriting to watch the massively talented Coen brothers deliver tired sardonic statements when they have so much more to offer. Burn After Reading is an okay ironic in-joke, but as a film it’s the equivalent of having Porky Pig sputter “TH-TH-TH-THAT’S ALL FOLKS!” at the end of the second act.

*Originally published in SFU's The Peak: Sept 22nd.
Posted by Cam Smith at 3:22 PM No comments: