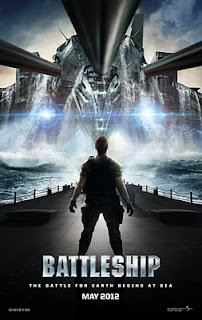 Peter Berg’s Hasbro game adaptation Battleship is an obnoxious all-out assault on the senses and grey matter wrapped up in an insincere flag of American jingoism and military fetishism. This is a picture that paints itself up like a U.S. Navy recruitment commercial - boasting endless gliding shots of state-of-the-art war tech accompanied by a fist-pumping hard rock soundtrack - yet also presents, as its antagonists, a small humanoid alien fleet who only attack out of defence and go out of their way to preserve the lives of innocent, baseball-playing children. Are we supposed to enjoy watching our cadre of jackass protagonists laying waste to these generic, lazily demonized visitors? Visitors who only showed up in the first place because we invited them over? I wish I could say these odd mixed messages speak to some sort of ambitious, subversive idea on the part of the filmmakers, but that doesn’t really seem to be case as this movie is aggressively dumb, dumb, dumb. Exhaustively so.


Using the genuine 2005 discovery of a life-supporting world in the Gliese planetary system as inspiration, Battleship opens with a top secret government science program, the Beacon project, launching a beam across space in hopes of reaching extra-terrestrial ears. Unfortunately, the initiative succeeds in precious little time, and five alien crafts crash down in the Pacific Ocean, smack dab in the midst of an international naval training exercise. Enclosing the area, and a fleet of destroyers, in a circular enforcement field, the otherworldly tourists – who resemble reptile-eyed UFC fighters in HALO suits – immediately provoke chaos as they are drawn into explosive battle with trigger-happy military forces.

Leading the charge against our new alien overlords is Lieutenant Alex Hopper (Taylor Kitsch), a brash, irresponsible hothead who is mere hours away from being busted down to civilian status by the gruff Admiral Shane (Liam Neeson). Unexpectedly promoted to command of the USS John Paul Jones - which is crewed by, among others, no-nonsense Petty Officer Cora ‘Weps’ Raikes (Rihanna) and the awkward, inexperienced seaman Jimmy “Ordy” Ord (Jesse Plemons) - Hopper quickly finds himself both at odds with his personal nemesis, the rescued Japanese captain Yugi Nagata (Tadanobu Asano), and up against a foe he can’t begin to comprehend. Meanwhile, back on the mainland, his unfathomably hot physical therapist girlfriend Samantha (Sports Illustrated Swimsuit model cum actress Brooklyn Decker) – who just so happens to be Admiral Shane’s daughter – finds her innocuous nature hike with double leg-amputee Lieutenant Colonel Mick Canales (true life veteran Gregory D. Gadson) transformed into a life and death struggle that may just reveal the enemy’s weak spot. 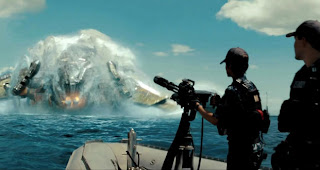 It’s painfully clear watching Battleship (or any of its marketing materials) that it desperately wants to be the next Transformers. Similar to Michael Bay’s terrible trilogy, it’s a graceless unholy marriage of crass, bottom-of-the-barrel storytelling and suffocating CG blitzkrieg. However, whereas Bay’s efforts can be examined with an almost perverse fascination – how much misogyny, racial insensitivity and angry adolescent mean-spiritedness can a grown man cram into a movie?! – this picture plays it safer and manages to be an even bigger chore. Running well past than two hours, the film is essentially a jagged, ugly special effects demo reel paired with a cacophonic orchestra of processed sounds similar to the final death rattles of an antique boiler room. There’s no excitement, innovation or fun, only concussive visual and aural clutter. And occasionally, as a relief, an AC/DC song.

In the right hands, Hollywood effects artists can conjure up astonishing, indelible images. Not so much here, where everything is over-designed to the point of being confusing. There’s a scene that echoes one of Titanic’s most breath-taking moments, in which two characters stand on the stern of a capsizing ship and stare down at the destruction below. Unlike in Cameron’s grand picture, though, there’s no wonder or horror, as the underside of the ship is a mass of fragmented CG projectiles and blurry twisted metal. By going too complex, everything looks utterly fake and unconvincing. Berg also throws in at least a dozen shots of alien ammo being machine-assembled and fired, or giant rolling killer balls, and they’re reminiscent of choppy video game cut scenes. Indeed, all of the battle sequences feel sterile and empty; there’s no humanity or energy. To endure them is to understand how tedious bad blockbuster filmmaking can be. 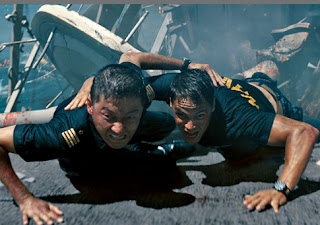 While the cast is hardly to blame for this bloated dud – partly due to the fact about 50% of their dialogue is incomprehensible military jargon and slang – there’s no doubt this film needed some likable characters. Kitsch, last seen headlining John Carter, is a capable actor stuck playing the antithesis of an appealing protagonist; Hopper is a short-fused, entitled frat jerk who the movie actively loathes for the first hour before trying to redeem, to little avail. We’re given no reason to want to see him succeed, other than the demands of the plot. Surrounding him, Neeson literally phones in his 10 minutes of screen-time, Rihanna utters things like “Boom!” and “Kentucky Fried Chicken!,” Alexander Skarsgard exudes earnestness as Hopper’s Navy hero brother and the blank Decker is fetching in tight tank-tops. Only Asano comes close to achieving gravitas, although his character – awkwardly inserted to help settle lingering Pearl Harbor resentments, it seems – fights valiantly to reach two dimensions. As for disabled non-actor Gadson, watching him I could only think about Harold Russell. Russell, a WWII vet who lost his hands in an explosion, was cast in William Wyler’s wonderful The Best Years of Our Lives and went on to give one of the most powerful performances in cinematic history and win a Best Supporting Actor Oscar. Regrettably, Gadson will have to settle for getting to whoop a silly mechanized space man senseless. 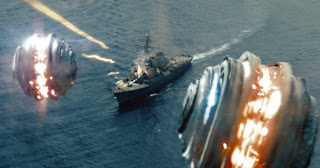 There was a point in time, following the release of his great football drama Friday Night Lights, when Peter Berg was considered an interesting director. Well, sorry to say it, but interesting directors don’t attach themselves to empty, soulless junk such as Battleship (or Hancock, for that matter!). Watching the filmmaker stage his drearily detached pyrotechnic-laden large-scale mayhem, it’s impossible not to appreciate how effectively Joss Whedon injected emotion and personality into The Avengers’ city-crushing finale, respecting the audience’s intelligence and refusing to simply overwhelm them with pandemonium. Even more embarrassing is an extended sequence, intended to generate tension, where the characters actually play Battleship, calling out coordinates and leaning forward in suspense. This conceit could work on-screen. I truly believe this. Nevertheless, under Berg’s guidance, it drags the pace to an eye-rolling slow crawl.

Berg has crafted a perfect storm of wretched creative decisions and blatant product-placement that's numbing to absorb. This is blockbuster filmmaking at its most charmless and cynical; a cinematic empty vessel that exists solely to boost Hasbro's bottom line. Among the very worst pictures of 2012 to date, Battleship torpedoes any hopes you might have for a rewarding trip to the cineplex into oblivion.

PS: It’s unforgiveable that Liam Neeson never gets to gravely declare “They’ve sunk my battleship!” What an amazing missed opportunity.