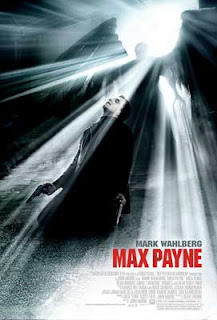 It must be said that video games fell well off my radar shortly after the inglorious final death rattle of the Nintendo 64. Sure, I’ve had controllers thrust into my hands since, and half-heartedly bumbled my way through the odd round of Grand Theft Auto or HALO, but it’s safe to say that the passion pretty much expired following my active retirement from all things GoldenEye and Perfect Dark. Although for some reason I did manage to play my way through a gritty little slice of hyper-noir called Max Payne, which, interestingly enough, proved absolutely useless in attempting to assess, or even understand, the latest video-game-to-film adaptation, titled (duh!) Max Payne.

Set in an atmospheric New York City, where snowflakes always hang artily in the air, Max Payne weaves the tragic tale of Maxwell Norbert Payne (I made 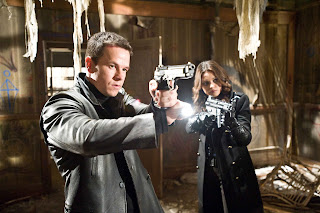 up the middle part), played by Mark Wahlberg, a once-great DEA agent now glumly toiling away in a dead end filing job. Why, you ask? Well, because some time back his wife and baby daughter, who apparently existed in a world of soft focus and delicate slow-motion, were killed by drugged-up madmen in a horrific home-invasion. Despite two of the intruders being handily dealt with on the spot, the identity of the escaped third wrongdoer remains a mystery, though I bet most audience members will solve this brain-teaser well before the improbably dense Monsieur Payne does.
Whilst following leads to crack this tragic quandary, Payne becomes a prime suspect in the murder of a tras 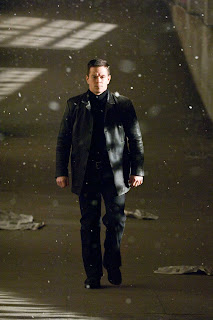 hy party-girl (Olga Kurylenko, who gets to engage in a seduction scene even more awkward than her one in Hitman). This misfortune brings him into contact with the girl’s sister, named Mona Sax (Mila Kunis), who, according to Wikipedia, is an assassin (but one of the film’s many poorly explained details). After an initial dust-up, the two join forces to investigate the cause of their loved ones’ one-way trip into the land of the living challenged, as well as seek to uncover the mysteries behind those shadowy winged creatures that hover like spectres of death in the night sky.
Now, that is about as much detail as I feel capable of giving you, as Max Payne almost redefines the term “Incomprehensible Action Extravaganza”. I’m not sure whether to blame untested screenwriter Beau Thorne or 20th Century Fox, whose tradition of butchering the life out of their genre-based properties is infamous throughout the entertainment world, for why so little of this film makes sense. The middle section in particular got so ridiculously hazy that I began to doubt my own mental faculties.
Typing this review now, I still have no idea how Payne is able to trace those two brutal murders all the way to the ominous Aesir Pharmaceutical corporation. It’s as if dire 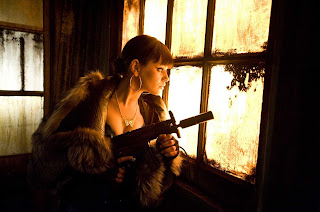 ctor John Moore and his editors removed all the connective tissue of their plot and only left in the pay-off moments. He’s also merciless with his actors (especially Ludacris and Beau Bridges), who typically show up at random, in disconnected scenes, and then disappear without mention. Kunis’ arbitrary reappearance during the climactic shoot-out is especially perplexing. How did she know where to go?
Also, what in the name of Sam Hill is up with those winged creatures? According to one character they’re called valkyries, famed from Norse mythology as being guardians of warriors. But for the life of me, I have no real idea what their purpose in the film is. Utter curiosity ov 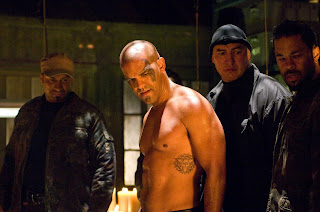 er this point even led me to Internet Movie Database, where a helpful fan named Yasifummah had posted a two-page explanation on their function in the video-game series. To be honest, after two mind-warping paragraphs I had to stop reading for fear of a brain aneurism. If anyone can logically explain their function in this film, you are a smarter individual than I.
Engulfed in the elaborately stylized atmosphere, and hung out to dry by a pathetic script, the actors are all uniformly awful. Wahlberg has two modes of expression: scowling and looking depressed, while Kunis comes close to blowing all the goodwill that Forgetting Sarah Marshall earned her. I was at least amused by Amaury Nolasco, as the evil Lupino, whose entire character seems to be based on staring menacingly down from rooftops (four separate 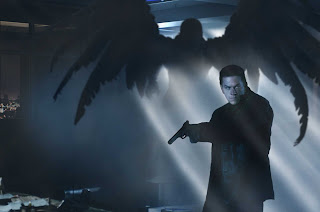 times by my count).
Max Payne isn’t simply a bad movie; it’s an aggressively unpleasant one, battering the audience with fractured, ugly images, concussive sound effects and unspeakable dialogue for 100 minutes, without ever having the courtesy to try to tell a story or entertain anyone. In the film’s dramatic opening Wahlberg tells us in voice-over: “I believe in pain”. Well, count me a convert Mr. Wahlberg, because watching Max Payne made me believe in pain too.
1 out of 5
*Originally printed in SFU's The Peak: Oct. 20, 2008.
Posted by Cam Smith at 12:26 AM No comments:

Film Review - W.: Not Worth Electing To The Top Of Your Must-See List.

“Too soon!” has become a popular criticism voiced by irritated on-line film fans (Are there any other kind?). Blame it on bloggers, celebrity sex-tapes or YouTube, but we now live in a culture obsessed with instant gratification, and Hollywood has been oh-so cooperative to meet this level of demand. Hence, we’ve been showered with a cavalcade of ripped-from-the-front-page cinematic excursions, each driven to become the definitive statement on the current political landscape. Some of the resulting movies have even managed to rise above their opportunistic aroma, resulting in modern silver-screen classics (United 93, Fahrenheit 9/11). But by and large, they’ve felt desperate and tired 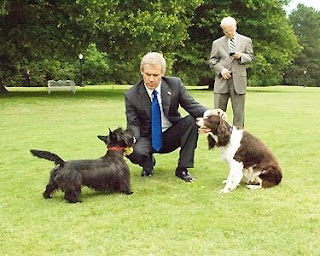 , and audiences have responded by purchasing tickets to less topical fare. Like Wild Hogs.

The latest entry in “Too soon!” cinema comes courtesy of acclaimed inflammatory director Oliver Stone. (Returning to this newly-christened genre after 2006’s unremarkable World Trade Center) His new film, W., is the first, and hopefully last, filmed biography of a U.S. president who has yet to pack his White House bags. Yep, George W. Bush may have spawned a flurry of calamities over his two terms in office, but you sure can’t knock the man for failing to inspire the artistic community.
The film opens with Dubya, (Josh Brolin) wearing a baseball cap, and standing alone in an empty ballpark, his arm 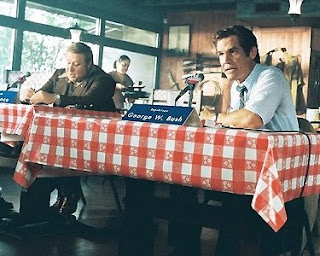 s raised to an invisible roaring crowd. We are then dropped unexpectedly into a post-9/11 Oval Office roundtable conference, where Bush and his peanut gallery of political confidants and strategists brainstorm possible nicknames for the rising terrorist threat (Axis of Hatred is briefly considered). The film uses this key beginning point to travel on a non-linear path through the soon-to-be former Pres’ life: from drunken frat-boy, to failed oilman and baseball manager, to over-whelmed chief-of-staff circa 2003, struggling with a job he seems completely unqualified for.
And damn it all if Mr. Brolin doesn’t sucker us in right off the bat. He’s disarmingly charismatic, occasionally inarticulate for sure, but plucky and filled with infectious confidence. The actor pulls off a tricky job, burrowing inside the skin of a man who 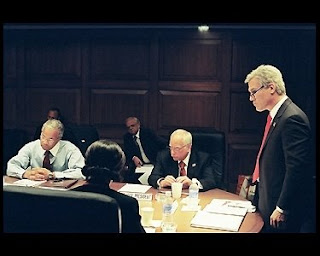 has already developed into a pop-culture joke, a walking caricature who has been lampooned by a generation of comedic talent. Brolin has side-stepped imitation and, through measured amounts of organic vocal and physical mannerisms, captured the spirit of Dubya. The brilliance of the performance lies in the fact that we forget we’re even seeing one, drawn in by that intangible magnetism that the most skilled of politician’s possess.
It’s too bad that Stone and screenwriter Stanley Weiser (who penned the director’s 1987 hit Wall Street) couldn’t come up with an interesting tale to match the actor’s show-stopping efforts. W.’s script just sorta meanders around, sometimes pleasantly, sometimes tediously, in search of who-knows-what?! They aren’t particularly interested in Bush’s early days, which are only lightly touched upon in flashback, with the most infamous moments of youthful debauchery all but ignored. This particular decision hurt 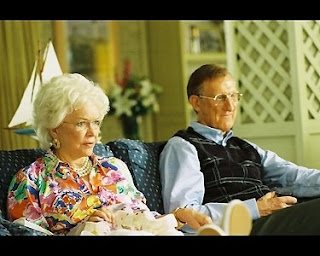 s the film’s later scenes dealing with Bush’s conversion to Christianity and subsequent oath to quit drinking. I didn’t even realize the dude had a problem...
We do witness his first meeting with future-wife Laura (Elizabeth Banks, wasted in a nothing role), but their relationship is quickly scuttled into the background. As well, material featuring current administrative members (Richard Dreyfuss kills as a malevolent Cheney, while Thandie Newton goes SNL-broad with an awesome/awful Condoleezza Rice impression) are highlighted in a number of key moments, but ultimately exist just outside the film’s focal point.
Rather, Stone seems far more interested in Junior’s relationship with stern, determined Bush Senior, played with grumpy dignity by Jam 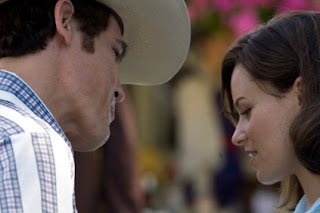 es Cromwell. The elder Bush is sick to death of watching his unmotivated, party-animal bum of a son putter from one failed venture to the next, dragging the family name down with him. Stone douses the film with steaming spoon-fuls of Freudian subtext, hypothesizing Dubya’s entire life and career as being driven by raging daddy issues. Trouble is, that’s about all he has up his sleeve.
The story’s crucial failure to engage us lies in the fact that no one behind the camera seemed compelled to aim for anything insightful or profound. As a biography it’s superficially bland (No mention of his controversial election OR second term in office???), but as a psychological study, W.’s as shallow as Bill O’Reilly is obnoxious. In addition, hinging a major dramatic moment on a dream sequence is always a cheap gimmick, but here it’s amateurish and embarrassing.
The real stumbling block of Stone’s film is its complete lack of perspective. We have no comprehension of Bush’s place in history, so the whole exercise feels hollow and inert. Walking out of the theatre, I didn’t possess any more insight into the real George Jr. that I had strolling in. At the end of the day, W. is too safe, too vague and too... soon.
2.5 out of 5
*Originally printed in SFU's The Peak: Oct. 20, 2008.
Posted by Cam Smith at 12:12 AM No comments: