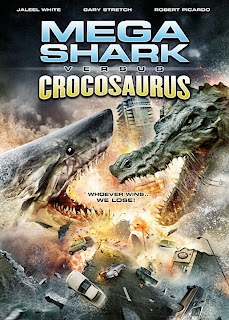 Going in, Mega Shark Versus Crocosaurus had to accomplish very little to entertain me. I'm a total sucker for bad killer sea creature movies (Read my obsessive retrospectives for both Jaws 3-D and Jaws The Revenge for proof), and all I ask is that the filmmakers manage to throw in some weirdo inspiration here and there amidst the brain-jellying exposition and scenes of washed up actors staring at unconvincing computer monitor screens. A memorably gory kill, perhaps. Or a climactic monster death so astoundingly ridiculous you find yourself fumbling for the rewind button. Heck, even a winking bit of pointless nudity (an old genre standby that has sadly become a rarity).  I'm an easy customer.

Unfortunately, MSvsCS - as I shall henceforth be referring to it - fails to deliver any of these base desires. Oh, it's rated R, all right. For language. Language! This is a killer shark/crocodile movie whose most extreme element is the F-word! I really don't understand the logic behind that decision. Why make such a film and not deliver on the audience's modest expectations? It's not like there was ever a danger of anyone being invested in the storyline!

What is the storyline, you ask? Well, it's about a Navy acoustics scientist (Jaleel White - he who once wore suspenders, giant red-rimmed glasses and nasally uttered the immortal phrase "Did I do that?!" ever Friday night on ABC) who is developing a new audio technology to repel sharks.  After his fiancé is killed by Mega Shark, who sinks her battleship by leaping over it three times and smacking it with his tail, he is recruited by the military and a tanktop-wearing government agent babe (Sarah Lieving) to destroy the errant fish. But wait! Over in South Africa, a ginoromous prehistoric crocodile has emerged and escaped into the sea, causing the rough-around-the-collar resident croc-hunter (Gary Stretch - who looks like a squintier, sleazier, hairier Pierce Brosnan) to also be brought in on the action. Will the hunter and Urkel be able to put their differences aside and stop the carnivorous man-eaters once and for all? (Spoiler: Yes. Yes, they will.) 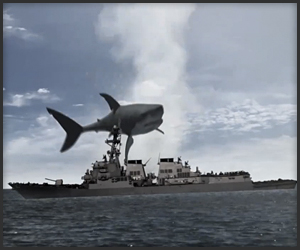 It's amazing how sizable a chunk of this film is spent with Urkel, croc-dude and Agent Hotty McHotterson sitting in a fake helicopter cockpit tediously arguing over whether or not the scientist's "hydrosonic spheres" will save the day. (Spoiler: they do!) Even though the flick runs only 88 mins, I feel like I'm still trapped in that godforsaken airborne purgatory waiting for someone to take charge and DO SOMETHING! ANYTHING!!! No one sane expects strong writing in a direct-to-DVD creature feature, but if you're going to give actors awful dialogue, at least make it so wretched it's hilarious, not boring.

Further, this is a picture which, in its very title, promises an epic clash between the titular monsters. The reality, however, is much more disappointing. The two beasts, which look like refugees from a Super Nintendo game, chomp down on each other's tails in unison and form a rudimentary circle. They then spin around and around, repeatedly and bloodlessly. To add insult to injury, even when destroyed they remain locked in their eternal game of Ring Around the Rosie. This could be forgiven if there were a few decent human fatalities, but there aren't. Most are just swallowed whole, disappearing into a blur of ugly CG. Yawn.

Ultimately, MSvsCS is a complete waste of time. It lacks the so-terrible-it's-funny qualities that made Shark Attack 3: Megalodon and Raging Sharks quasi-brilliant, and never lives up to its deliciously pulpy title. Too bad, so sad.

P.S.: It's never a good idea to name your submarine USNS Invincible. Soon or later, it will be proven to not be.
Posted by Cam Smith at 3:39 PM