Another Summer in Amity: 35 Years of JAWS, Day 5: JAWS: THE REVENGE 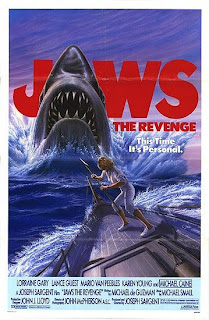 As unthinkable as it seems now, there was a point in time when a fourth Jaws film seemed like a good idea to someone. How and why is hard to determine, but it would seem that Universal decided, a few years after the release of Jaws 3-D, that the cracks in the franchise were repairable and that audiences would be game for another installment involving the Brody clan’s increasingly preposterous ongoing war with enormous man-eating fish. Apparently, the studio decided to scapegoat the third entry for the diminishing returns of the series, and felt it necessary to essentially ret-con the SeaWorld-tastic events of the past and return to the peaceful, sleepy town of Amity once more. After all, how could the public resist such a tempting cinematic treat?

Supervising the resurrection of the great beast was Joseph Sargent, helmer of hits like The Taking of Pelham 1 2 3 and the Burt Reynolds’ fave White Light

ning, who’d transitioned into the television industry by the dawn of the 1980s. He would be both directing and producing the project, dubbed Jaws: The Revenge, and bringing to life a script by Michael De Guzman, an untested feature-film-writer who had previously penned two episodes of the Steven Spielberg-created NBC series Amazing Stories. Seemingly aware of where the property had gone astray, Sargent decided that it was imperative the new movie be character-based and continue the story developed over the course of the first two chapters. 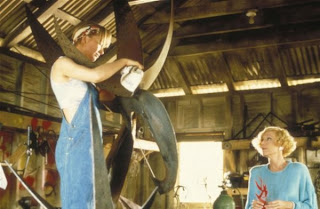 Hence, Lorraine Gary was hired to reprise her role as Ellen Brody, while Lance Guest - of Last Starfighter fame - was signed to play her eldest son Michael, and Michael Caine as her dashing devil-may-care romantic interest. Purportedly, Roy Scheider was also asked back so he could be served up to the shark as an appetizer in the flick’s opening scene. Shocking as it may seem, he was able to resist the lofty offer and instead the script was altered so that Sean Brody (nasally Mitchell Anderson – light years away from Jaws 3-D’s douchey cowboy John Putch) would be the sacrificial victim.
Following a bumpy production period in Martha’s Vineyard, Nassau and the Universal back-lot, Sargent was forced to reassemble his cast and crew to reshoot the ending of the film following disapproving test audience feedback – a complication which would wind up preventing Michael Caine from accepting his Best Supporting Oscar for Hann 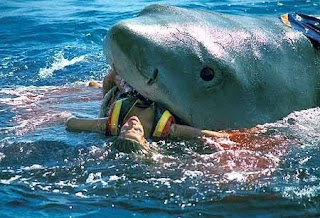 ah and Her Sisters in person (He later joked that though he never saw the results of his hard labor, he had “seen the house that it built, and it is terrific!”). When Jaws: The Revenge was at last unleashed onto the unsuspecting populace on July 17th, 1987 it was met with a hailstorm of harsh critical barbs and middling box-office, grossing just 20-million domestically and 31-million in foreign ticket-sales. Routinely named one of the worst films of all time, the film ultimately proved to be the final devastating blow for the franchise – as well as Joseph Sargent’s motion picture career - and a source of ironic hilarity for untold numbers of bad movie fans. On a more positive note, though, it also inspired a seriously addictive NES game and a brilliant Richard Jeni comedy routine.

The epic saga that is Jaws: The Revenge begins in picturesque Amity Island around Christmas time. While children sing heart-warming carols in the chilly open air, Chief Sean Brody (Anderson), who has followed in his now-deceased dear dad’s law-keeping footsteps, is called to investigate an errant log floating in the harbor. But no sooner has the poor sap hooked the chunk of timber than his entire arm has disappeared down the cavernous maw of a gigantic great white shark. In precious little time, the rest of his gnarled form follows suit. Did the evil animal create the 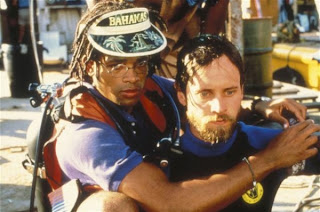 wood-y diversion to catch him? (No, seriously, did it? I still have no idea) Well, crazy old lady Brody thinks it did, much to the concern of surviving son Michael (Guest) and his artist wife Carla (Karen Young). So, to cheer up the grieving matriarch, the couple invites her back to their home in Nassau, where Michael and his colleague Jake (Mario Van Peebles) are conducting research on conch snails for a Marine Biology PhD project. Flying them there is Hoagie (Caine), a mysterious pilot with a live-for-the-moment mentality and an astonishing tolerance for listening to hysterical middle-aged women spout screwball theories about ocean-dwelling carnivores.

However, apparently eager to back up Mrs. Brody’s claims, the colossal finned culprit has made the speedy journey from the east coast of the USA to the Bahamas in about two days. That is one determined fish! Rather than reunite itself with Ellen, though, the bulky creature reveals itself to Jake and Michael, who, rather recklessly, decide to abandon their trivial sea-snails in favor of secretly studying the predator instead (Maybe I’m wrong, but I don’t think PhD research grants quite work that way…). Despite not telling anyone of their covert research mission, Mrs. Brody senses something is wrong and is plagued by visions, nightmares and sepia-toned flashbacks to events which she wasn’t actually present to witness (The novelization states that this is due to the shark being controlled by a voodoo witch doctor, but the film isn’t quite so clear or boldly off-the-wall).

Possibly bored of swimming around doing nothing for weeks on end, the shark finally makes its presence known, interrupting the public unveiling of Carla’s latest dangerous-looking, jagged metal statue, and chowing down on a banana-boat-riding extra. He 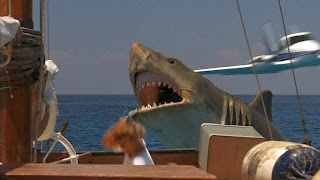 r deranged beliefs confirmed, Ellen hijacks Michael’s sailboat in order to feed herself to the shark – a loony plan which Michael, Hoagie and Jake justifiably disagree with and attempt to prevent. After attaching some sort of tracker thingie to the monster, Jake is killed (or not, depending on the version you’re watching) and the remaining trio ram the mast of the boat into the inexplicably-roaring shark causing it to spontaneously explode. We’re then treated to a recycled clip from Jaws showing its corpse sinking to the ocean floor. Then the Brody family lives happily ever after. Well, except for Sean Brody, what with the being dead and all.

Taken as a stupid whole, Jaws: The Revenge is like the most unbearable type of fan-fiction (I should know, I wrote an awful Jaws 5 outline when I was 11); assuming that a great sequel story can be made by simply ripping off the original’s most iconic scenes and inserting random obscure references to please the die-hards (Both Mrs. Kintner (Lee Fierro) and Amity council member Mrs 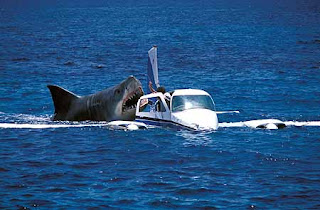 . Taft (Fritzi Jane Courtney) have brief cameos sitting in Ellen’s living room) Although Sargent and De Guzman obviously worship Spielberg’s 1975 smash, their fawning reverence is like an anchor weighing their movie down, preventing it from being its own unique entity. Consider the father/child mimic scene, which was a heartfelt, poignant moment in Jaws, and is replicated here between Michael and his daughter Thea (Judith Barsi) almost shot-for-shot. Whereas the first film used the scene as a character-driven emotional release, introducing it at the precise time it was needed, Revenge just plunks it in haphazardly during a listless gap between shark incidents. Rather than engage in thoughtful, organic storytelling with multi-layered individuals, the film plays like an abbreviated series of perfunctory story beats that have no real aim or purpose beyond barely filling up three acts.

Even though the picture is intended to be thrilling adventure tale, the shark is almost a non-entity during the run-time and nothing exciting or interesting really happens to the characters. Instead, Jaws: The Revenge plays like a really dull soap opera 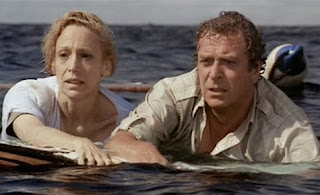 in which everyone carries on tedious expository speeches and exhibits stereotypical movie behavior in order to cause badly-written crises and arguments to occur. How else to explain Michael and Jake’s idiotic behavior regarding their deadly science project? If your brother had recently been devoured alive, would you really take part in unprotected dives with a visibly hostile predator? Especially after it’d already come close to killing you once? And wouldn’t it be a wise idea to warn local authorities that there’s an aggressive man-eater in the vicinity? Lord knows, banana-boat woman would probably have benefited from a small word of caution.

Sargent occasionally tries to spice up the suffocating dreariness with a few inconsequential shark encounters, but he’s working with a robot that wouldn’t be out of place at a Chucky Cheese restaurant. It moves drunkenly, has a coarse plastic complexion, emits laughable guttural groans and is often quite evidently sus

pended above the water. At one point, you can even see a cable pulling it. Whereas Spielberg and Szwarc understood the limitations of the mechanism, Sargent shoots it from every possible angle – frequently altering its scale in the process - and has it commit physically impossible acts such as remaining stationary and standing on the tip of its tail in the water. It’s never scary or menacing, rarely appealing and almost always distractingly phony. Arriving a dozen years after the original design, one would have to be as nutty as Mrs. Brody to consider this progress.

In the end, Jaws: The Revenge is little more than a pathetic, whimpering finish to a once endearing film series. Although I don’t think that it was Sargent’s primary intention to cheaply manipulate the audience by calculatingly exploit

ing their fondness for the first Jaws, his under-baked, soggy final product seems to indicate otherwise. Rather than accomplish its sole objective of keeping the profitable Universal’s property afloat, Revenge sends the entire franchise spiraling into the same blackened abyss previously reserved for inert, decimated shark carcasses. Given the direction it was headed, perhaps its best to just be thankful for a speedy mercy killing, no matter how unintentional.

Shark-tality Count: 2 or 3 (depending on the version) – Sean Brody, Banana boat woman, Jake (Current DVDs feature this character surviving, while some theatrical cuts and TV versions end with him taking an exploratory dive down the shark’s gullet.)

Best Toothy Kill: Sean Brody, I guess. You’d think that having such a low-kill count would at least inspire the filmmakers to put some effort into the measly few they have. Sadly, you’d be sorely wrong. Certainly Brody’s actual death is nothing to write home about, but it’s elevated a bit by being crosscut with children singing Christmas carols. Oh, the cruel irony of it all.

Worst Toothy Kill: Jake. His survival in certain versions is utterly moronic, but his demise is no better. His death is intended to have a similar impact as Quint in Jaws but any drama is annihilated by the shark inexplicably standing on its tail and the Jake clumsily tripping ass-backwards off the ship’s mast.

How the Shark Finally Bites It: (Also depending on version) Ummm... I’m not exactly sure. It’s hit with the mast of the Brody clan’s sail-ship and detonates without warning or cause. One cut of the flick just features the shark being impaled (which is still goofy but at least sorta makes sense visually) whereas the other requires a team of analysts working around the clock JFK-style to decipher.

Climactic Words to Chew On: Courtesy of a pointless sepia-toned flashback, we once again get to hear Chief Brody utter his classic “Smile you son of a...” Needless to say, the impact is considerably dulled.