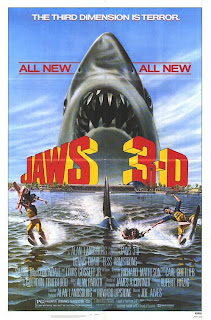 Originally, during their development of a Jaws 2 follow-up, executive producers Richard D. Zanuck and David Brown had a very different plan in regards to the direction a third series’ entry should take. The duo were of the opinion that audiences would no longer be able to accept the premise of yet another shark arriving in Amity at all seriously, so the film best not either. Their cracker-jack plan? To produce a spoof film, along the lines of Young Frankenstein or Airplane!, called Jaws 3, People 0. The duo were so certain that this was the correct approach that they hired on Animal House producer Matt Simons and commissioned National Lampoon writers John Hughes (Yes, that John Hughes!) and Todd Carroll to conjure up a script.

However, Universal, not pleased to see that its high-banking tent-pole property was being turned into an ironic joke, shut down the production and fought for a more conventional threequel. This clash of opposing ideas ultimately led to Brown a 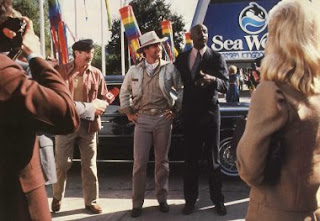 nd Zanuck abandoning the project altogether, and the studio turning the fishy franchise over to exec producer Alan Landsburg (responsible for such masterworks as Porky’s II: The Next Day and Tarantulas: The Deadly Cargo), who nabbed up Guerdon Trueblood’s story outline - which involved a shark becoming trapped in a lake after a poorly-navigated migration – and handed it off to series scribe Carl Gottlieb, Legend of the Lone Ranger screenwriter Michael Kane and author Richard Matheson (Yes, that Richard Matheson!) for expansion and polishing. It’s unknown how many versions of the script were cranked out, or which lasting elements came from which writer, but Matheson has been quoted as saying that the final screenplay as we know it was essentially cobbled together by uncredited studio script doctors.

Although Zanuck and Brown had briefly flirted with employing helmer Joe Dante - whose cheeky 1978 B-movie Piranha had proved to be a cult hit - their dismissal led to this tantalizing possibility evaporating into thin Hollywood air. Instead, the studio chose to seat Joe Alves, the franchise’s capable production desi 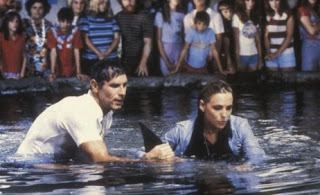 gner, who also oversaw second-unit shooting on the first sequel, in the director’s chair, with a stipulation that the film be shot for 3-D so as to compete with popular trashy horror flicks like Friday the 13th Part III. While none of the original cast was expected to reprise their roles, Roy Scheider allegedly ran screaming towards Blue Thunder just to ensure that he’d be unavailable if Universal came a-calling. Instead, the lead was handed over to an unknown, named Dennis Quaid, who would play Chief Brody’s all grown-up son Michael, with support coming from Bess Armstrong, newcomer Lea Thompson (Just two years shy of Back to the Future) and recent An Officer and a Gentlemen Academy Award-winner Louis Gossett Jr.

Released under the oh-so-cheesy moniker Jaws 3-D on July 22nd, 1983, the water-logged effort (Which, to be fair, did have a really wicked teaser trailer) would end up generating just under half the worldwide box-office of Jaws 2, bringing in 45-million U

S and 42-million overseas. Though not a financial disaster by any means, it was readily apparent that the series had slipped out of the cultural zeitgeist and was unlikely to recover it’s once illustrious status. Just to further hammer home this point, at the close of the year the flick would garner five Razzie nominations,
for film, director, screenplay, supporting actor (Gossett Jr.) and newcomer (the movie’s two dolphin sidekicks). This, of course, would have little bearing on the regrettable decision to green- light a fourth film a few years later.

Abandoning the calm environs of Amity Island, Jaws 3-D transplants the aquatic action to balmy Orlando, Florida, where none-too-bright businessman Calvin Bouchard (Gossett Jr.) – who, judging by the actor’s tenuous accent, may or may not hail from New Orleans – is opening up a colossal new SeaWorld(™) theme park. Folks, this park has it all; an Undersea Kingdom decorated with hokey mechanical eels and tentacles, a water show featuring trick-skiers in lederhosen performing a human pyramid, a pair of w

acky dolphins named Cindy and Sandy and a plausibility-busting 35-foot man-eating great white shark. Obviously that last attraction isn’t an intentional addition, but its present nonetheless, alongside its cute lil’ 10ft off-spring, and making short work of greasy-looking maintenance workers and inept coral robbers. Thank the heavens, then, that Philip FitzRoyce (Simon MacCorkidale) is on the scene! He’s a hotshot British photographer/hunter who feels the best method of dealing with the problem is massacring the beast on live television for publicity. While logic would seem to dictate that most media outlets and animal protection groups would be rather upset by a high-profile zoo murdering a protected animal for entertainment purposes, Bouchard is a dope, so he’s fine with the deal.

Enter the sole voices of reason: Kathryn Morgan (Armstrong), a senior biologist eager to contain and study the creature, and Michael Brody (Quaid), her boyfriend and the park’s engineer, who mostly stands around and does nothing. Oh, a cowboy-hat-wearing Sean Body (John Putch) is also kicking around, alongside his barfly professional-skier girlfriend (Thompson), but they don’t really add much to the already convoluted equation. After Kathryn 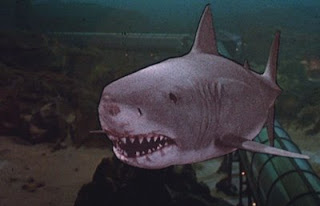 and FitzRoyce capture and sedate Jaws Jr. during an unnecessarily dangerous night-hunt, the biologist attempts to nurse it back to health. But Bouchard wants moolah, dammit, so he puts the sick shark on public display. Where it promptly dies. This ensures that Momma Shark is officially pissed and she begins attacking the Undersea Kingdom, to woefully unsatisfying effect. FitzRoyce, ever the wannabe hero, attempts to lure the creature into the pump system, but brings along rope that’s about as strong as a wet noodle. Hence, he winds up mashed to a pulp. In a confusing last-ditch crack at saving the day, Michael Brody does some high-stakes welding, which proves pointless when the shark, shortly after, attacks the underwater control-room holding himself, Kathryn and Bouchard. All is looking grim until they notice FitzRoyce’s arm flopping around the behemoth’s maw, still clutching a grenade. Utilizing a rudimentary hook, they pull the pin and KA-BLOOEY!!!, the shark dies, Cindy and Sandy celebrate in high-pitched dolphin fashion and Bouchard vanishes without a trace. The end. Or is it?

Jaws 3-D is a pretty terrible movie, albeit a pretty terrible movie that’s strangely watchable. Indeed, there is so much camp on display that it makes for a thoroughly amusing “Bad Movie Night” choice. From the laughably ludicrous 3-D effects themselves (Not only do we get eternity-length shots of dead fish, butchered arms and cartoony-looking sharks, but a 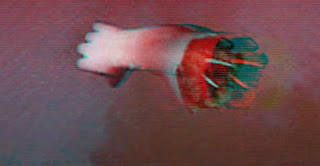 lso Pussy willows and plastic tri-pronged spears!) to the painfully awkward acting and wretched dialogue (Bouchard: “Well, you know, uh, it's that old shark screen, the bubble screen. You know, shark's don't like that. It's what they call, uh, marine segregation”), you’re guaranteed a solid 99-minutes of incompetent hilarity. To take it a step further, I’m even going to declare that if you don’t collapse into a spastic bundle of giggles during the climactic scene where the great white “smashes” through the glass barrier protecting the control-room, you, sir or ma’am, have no soul!

It’s generally acknowledged that the shark grows more and more fake-looking with each installment, and this film truly doesn’t disappoint in making the once fearsome predator resemble a taxidermy patient. Rarely moving at all, t 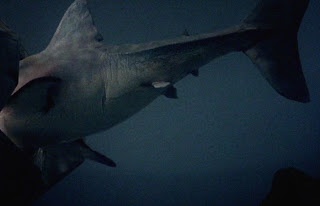 he creature inches along at a crawl in almost every scene it’s featured in. Whereas, in the first two entries, there was brutality and speed to its attacks, in Jaws 3-D the gilled antagonist looks logy and disinterested in prey; snacking only on those stupid enough to virtually crawl into its yawning oral cavity. It also swims backwards multiple times, which recalls crucial information given in Deep Blue Sea dictating that sharks simply can’t perform such an unnatural feat.

Certainly a large part of the blame for Jaws 3-D can be pinned on Alves (he, unsurprisingly, never directed again), whose efforts feels slack and mechanical, but the whole enterprise reeks of studio interference. It is fairly obvious that no one invo

lved in making the movie had any real enthusiasm or inspiration for doing so other than a chance at raising Universal’s bottom-line. The tension is long gone, the players cut-rate and dull and the attack scenarios wholly unimaginative (Minus FitzRoyce’s gloriously goofy demise). Heck, even the score by Alan Parker (No, not that Alan Parker!) feels workmanlike and lifeless – a sad successor to the mighty John Williams. You know there’s something rotten in the aquarium when even the iconic Jaws theme can’t quicken your pulse an iota.

At the time, Jaws 3-D marked a new low for the franchise; a crass attempt to copycat the sla 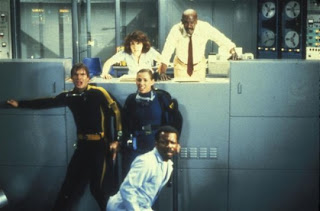 sher genre with a giant fish and outrageous technological gimmickry. Gone was the attention to characterization and drama that made the first and, to a lesser degree, the second, compelling suspense pictures. Ultimately, despite boasting a gargantuan killer bearing hundreds of dagger-edged chompers, this third Jaws picture couldn’t be more toothless.

Best Toothy Kill: Easily FitzRoyce. For all of its innumerable descents into awfulness, “Jaws 3-D” at the very least gives us something new in the kill department: a POV fatality from inside the shark’s gullet. The results are both riotously corny and insanely cool.

Worst Toothy Kill: I gotta go with Shelby Overman’s death by stupid montage. I’d probably be more willing to forgive its terrible staging if it didn’t end with a craptastic shot of the muscular, porn-moustached welder’s arm “floating” in eye-scraping 1980’s 3-D.

Climactic Words to Chew On: As the entire finale is filmed underwater, in silence, we only get a few rather underwhelming breathing sounds and gurgles.

Shark-splosion Rating (Out of 10): 4.0 (Extra point added for silly-looking shot of shark’s jaws flying towards audience.)