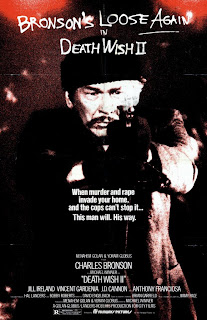 What an utterly revolting pile of rotten celluloid this is! Whereas 1974's Death Wish, while hardly a great movie, was at least an intriguing, straight-faced character study of a peaceful man driven mad by urban decay and a gruesome attack on his family, this sequel wallows into the muck and asks us to celebrate it's irredeemable qualities. I'm no prude when it comes to shocking or disturbing subject matter, but this flick left me desiring a hot shower.

Taking place 2 years after the first film, Charles Bronson's Paul Kersey has put his vigilante ways behind him - a character change that makes little sense given the original's ending - and is once again living a peaceful life as an architect, lovingly supported by his radio reporter girlfriend Geri (Bronson's former flame Jill Ireland). One day, while out at a fair with Geri and his mentally traumatized daughter, who still hasn't recovered from her sexual assault in the first film, he's accosted by a group of colourfully garbed punks (including a very young Laurence Fishburne in stupid pink sunglasses) who steal his wallet. Kersey chases them off but, in an act of revenge, the nogoodniks break into his house and savagely gang rape and murder his latina housekeeper. Then, when Kersey returns home, they knock him out and kidnap his daughter and rape her too. After she's killed - courtesy of being impaled on sharp fence posts (Seriously!) - Kersey moves into a hovel, dresses as a homeless man, and sets out to even the score. 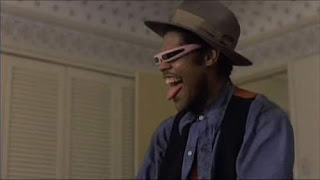 On a B-movie level, Death Wish II could have worked. Sure, it's trashy stuff, but there's no reason that it couldn't have been fun in a cheesy exploitation movie kinda way. However, returning director Michael Winner seems unsure of how to move away from the grim seriousness of his first instalment. He tries for over-the-top cartoonishness in his treatment of the teen thugs - who are about as threatening as the gangs in West Side Story - and Bronson-delivered violence, but uncomfortably revels in the unnecessarily prolonged scenes depicting horrific violence against women. No breasts are left unbared, and all dignity is out the window as Winner lingers sadistically on ever scream, plea for mercy and choking sob from his on-screen victims. Even worse, the rape of Kersey's handicapped daughter is bizarrely shot so as to be erotic, which is, frankly, intolerable. By the time the third such scene rolled around, I loathed Winner and his dubious filmmaking morals far more than the utterly laughable criminals.

Then, after thirty or so minutes of this torture, we're supposed to cheer as Kersey ploddingly wanders around town gunning down the guilty. But, personally, I was so disgusted with the film, that I just watched, bored and numb, waiting for the 88 minute runtime to reach its welcome end. Even Bronson seems embarrassed to be associated with the project, and does little more than smirk, squint, stalk and shoot. Death Wish II isn't just a bad film; it's a loathsome and stupid one.