Another Summer in Amity: 35 Years of JAWS, Day 1: JAWS 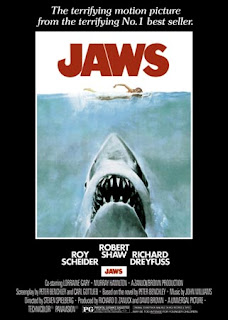 Hard to believe, but it was 35-years ago yesterday that director Steven Spielberg boldly made his formidable presence known to both Hollywood and audiences alike with a “perfect engine” of a crowd-pleaser; a film which forever changed the rules and practices of the movie-making industry and inspired generations of viewers to develop instantaneous aquaphobia. Based on Peter Benchley’s best-selling novel, and bearing the economical and pointed title Jaws, the picture would be the first film to receive opening-weekend wide-release distribution and go on to earn over $470 million at the box-office – a record at the time, which would prove short-lived once Star Wars erupted in 1977 – and give birth to the modern blockbuster.

While it’s often tempting, from our current vantage point, for critics to vilify the movie for helping to pave the way for the legions of soulless four quadrant-geared tent-poles which followed (and plague us to this very day) – a paradigm shift which proved lethal to the popularity of the intelligent, experimental and thematically 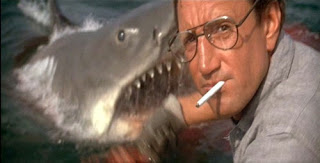 complex adult-driven cinema of the 70s - it’s also impossible to not commend Jaws for how marvelously well it accomplished what it set out to achieve. Viewing the film – which still remains a singularly staggering exhibition of white-knuckle tension – one has to appreciate the idealistic purity and whimsical innocence that exists just below the churning surface of the blood-streaked surf, where the unproven director’s richly artistic and broadly commercial sensibilities potently merged for what would be the first of many glorious times (Although strong early glimmers were previously evident in both Duel and The Sugarland Express). As a cultural marker, Jaws looms gargantuan and mighty, but as a transcendent work of pure cinema, it’s a flawless masterwork; a relentlessly haunting and joyful experience which has altered career courses and irrevocably changed countless film-lovers’ lives forever.

Certainly, one of the movie’s greatest assets, and a critical component in establishing a vice-like grip on the audiences’ emotions, is the iconic opening involving Chrissie Watkins’ (Denise Cheshire) ill-fated night-time skinny-dip. Other than Psycho’s classic shower-stabbing of Janet Leigh, has there been a more unforgettable act of on-screen murder towards a shrieking naked female? (Curiously, Spielberg would later mine the famous scene for laughs in 1979’s 1941, to pr 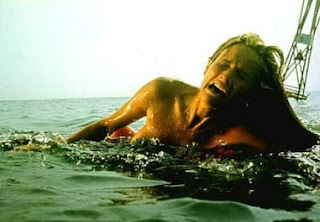 etty lame results) Notice, however, how Spielberg initially establishes the serenity of the moment, elegantly capturing the lithe girl’s slender form gliding gracefully across the moonlit ocean’s rippling surface. We are at once alternately awed by the picturesque splendor of the images and unsettled by the subtly foreboding rumblings buried within John Williams’ powerful Oscar-winning score and the director’s vaguely predatory POV from below. Suddenly the infamous DUM-DUM-DUM-DUM begins to throb on the soundtrack, gradually increasing in intensity, as the camera begins to ominously close in on the unsuspecting victim and we nervously lean forward in our seats. Then the panicked thrashing and guttural, frenzied screaming starts and we’re completely and utterly hooked; frozen in horror, but so completely under the director’s spell that we dare not turn away. Finally, after what feels like an eternity of dreadful pandemonium, calm returns and we relax. It’s over. For now…

Indeed, the devil has come to peaceful Amity Island and he couldn’t have found a more unsuspecting vacation spot. With its quaint Norman Rockwellian décor (Not a single franchise restaurant or major-market retail chain in sight!) and populace of genial, easy-going small-town dwellers it might as well be called Hometown, USA. Spielberg’s lovingly picks out little detail 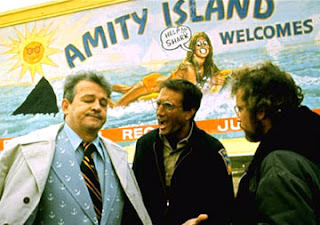 s to help sell the reality of this world, such as the salty presence of Harbor Master Frank Silva (Donald Poole) cheerfully smoking his pipe on the sidewalk, or the emphasis on everyone referring to each other on a first-name basis, and it works. We like and understand these people, and can literally feel the low-key pulse of their half-empty streets, slightly run-down buildings, over-crowded meeting rooms and heavily trafficked beaches (filled out with almost distractingly normal-looking extras). When our hero, Chief Martin Brody (Roy Scheider), emerges from his humble, white picket-fence-bordered house, you can’t help but smile. If ever there was a town ill-equipped to deal with the sinister problem presently navigating their coastline, it’s this one.

The amusing dichotomy between the gentle, unworldly masses of Amity and the ravenous, unstoppable shark provides the film with a great deal of its escalating urgency. Unlike similar genre entries and cheapo horror flicks, the violence here is ugly and brutal and has genuine consequences. Consider the fall-out from the gruesome demise of young Alex Kintner (Jeffrey Voorhees) and h 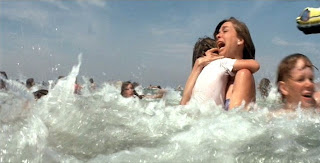 ow it inspires both full-scale shark hysteria – resulting in a disorderly city council meeting overseen by the greedy, tourist dollar-obsessed Mayor Vaughn (a priceless Murray Hamilton, in an endless parade of gaudy suits), a wildly funny and incompetent hunting party and an animated public gathering around the fishermen’s small fry quarry (complete with a stray arrow sticking out of its side!) – and, more tragically, a tearful condemnation of Brody’s lack of action from the boy’s grieving mother (Lee Fierro). Scenes like this illustrate why Spielberg is the best at what he does; he never fails to factor humanity into his material, no matter how pulpy. These deaths cause shockwaves within the close-knit community and the film tastefully doesn’t take them for granted or treat them like a repulsive gag.

The indisputable heart of Jaws, though, is the last-ditch hunting voyage undertaken by Brody, marine biologist Matt Hooper (Richard Dreyfuss, mixing impish goofiness and fierce intelligence with cool aplomb) and local shark-killer extraordinaire Quint (Robert Shaw, never better) aboard the cramped, weathered sea-craft the Orca. Their expedition - a series of day-trips in Benchley’s novel, combined into one satisfying whole by clever screenwriter Carl Gottlieb - supplies the film with a remarkable character- 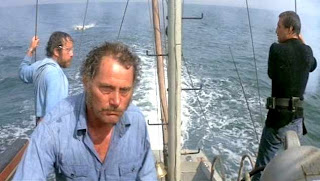 driven third act in which we realize, well before the mismatched trio, that it’s the behemoth shark doing the hunting and not vice versa. There is a brief striking moment, wherein Quint watches the shark drag three large barrels beneath the depths, which completely sells the magnitude of the situation. The look on Shaw’s face registers a series of conflicted sentiments; surprise, concern, exasperation and even a hint of begrudging respect. Although Hooper may be the most academically educated party aboard, Quint has the most personal score to settle – explained during his beyond-brilliant monologue detailing the sinking of the U.S.S. Indianapolis (“Sometimes that shark he looks right into ya. Right into your eyes. And, you know, the thing about a shark... he's got lifeless eyes. Black eyes. Like a doll's eyes. When he comes at ya, doesn't seem to be living... until he bites ya, and those black eyes roll over white and then... and then you hear that terrible high-pitched screamin'”) – and for him to express even surpressed shock and awe significantly raises the dramatic stakes.

Although Quint and Hooper are arguably more suited to slaying the beast, it is ultimately Brody who gets to achieve the Herculean feat. Scheider has the least-flashy role of the three, but he is also given the most room to grow and develop. He’s portrayed as an outsider in almost every situation within the story; a native New Yorker living on an island of indigenous inhabitants, a lone sane man overpowered by local bureaucracy, a non-entity in his two shipmates’ competitive clashes for alpha-male supremacy. On board the 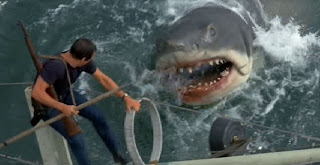 Orca he assumes the lowly role of chum-thrower while Hooper steers the boat from the second-story steering column and Quint stands, champion-like, atop the lofty viewing platform. However, Brody’s advantage lies in his perception of the creature. While his two fellow adventurers only acknowledge the shark in natural terms – an animal that needs to be dispatched by routine methods – Brody sees it for the malevolent force that it is and isn’t hampered by personal prejudice or stubborn ingrained beliefs or assumptions. He triumphs, not through knowledge or expertise, but through ingenuity, bravery, fear and dumb luck. And when he does pull that trigger, and the shark explodes in a shower of flesh, blood, bone and water, the feeling is electric; one of the most unabashedly rousing moments in cinema history.

Of course, one would be remiss to not credit the performance of the shark itself. By all accounts a severe pain-in-the-ass for cast and crew alike (read screenwriter Carl Gottlieb’s account of the near-trainwreck production in his fascinating The Jaws Log) the creatu 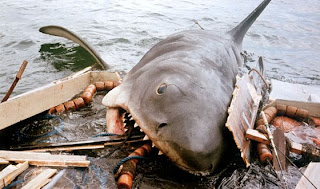 re, which was built by Joe Alves and Roy Arbogast, still works every second he’s chewing the scenery. The beast’s attacks on the Orca have true weight and when it lays thrashing on the boat’s submerged deck, snapping violently at Quint’s ankles, the menace is palpable and very, very real. Perhaps its greatest contribution is its clunky limitations, as it forced Spielberg to rely on his inner-Hitchcock, teasingly building up the shark’s alarming presence over the course of the picture before giving it its long-desired close-up. Had this situation not transpired, there’s a good chance that we wouldn’t hold Jaws in the same high regard as we do today.

Broken down to its bare essentials, Jaws is a very simple, well-told story with archetypal characters, primal thrills, an appealing location and a finely-honed Man vs. Nature theme. In the telling, thoug 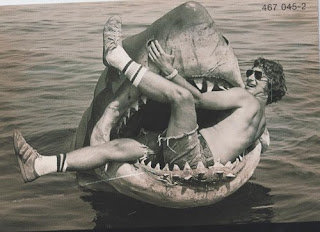 h, it’s carefully stripped-down structure and honest, sensible heroes instil it with an often profound level of integrity, emotion and truthfulness that elevates it well above its genre roots and into the realm of high art. For Steven Spielberg, Jaws was a trial by fire, a chance to prove his worth amidst the very worst production conditions. His eventual off-the-charts triumph afforded him the necessary juice to gift audiences with treasured cinematic tales like Close Encounters of the Third Kind, Raiders of the Lost Ark, and E.T. For audiences, it was a delightfully frightening, exhilarating yarn that produced as many nightmares as starry-eyed dreams of movie magic. Three and a half decades after its release, Jaws still refuses to let go, and it’s unlikely it ever will.

Best Toothy Kill: A toughie, given that Spielberg makes every attack a veritable extravaganza of unleashed grisly mayhem, but I have to go with Quint’s all-too-slow demise. The most dramatically impactful death in the film – not to mention most ghastly – the Orca captain’s blood-spurting descent into the behemoth’s razor-sharp triangular chompers is so unflinchingly brutal and terrifying that it sticks with you days after seeing it.

Worst Toothy Kill: Nadda. This category will be better served in future instalments.

How the Shark Finally Bites It: Death by exploding oxygen tank.

Climactic Words to Chew On: Brody: “Smile you son of a...”