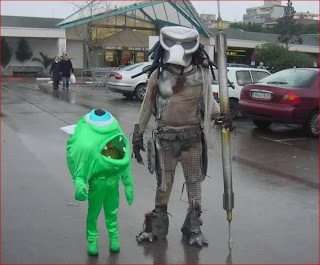 Is it just me or has this summer's cinematic offerings been seriously underwhelming. I mean, yeah, Toy Story 3 was a magical odyssey for the young and old alike (blah, blah, blah) and Iron Man 2 was fun, but Prince of Persia? Robin Hood? Get Him to the Greek? Shrek Forever After? Knight and Day? I mean, even the semi-decent ones in that pile aren't exactly worth leaving the safe confines of your barred-and-gated homes for. Sure, Inception is only days away, but can one film single-handedly redeem an entire season? I suppose we shall see. In the meantime, in a half-assed effort to remind our adoring audience that we are in fact still alive, myself and my loyal and snarky co-host Tom Wytrwal have convened to spit out another dash of mp3 brilliance in order to help lift your tragically weighed-down spirits. We're just considerate like that.

Despite having suffered through two terrible Alien Vs. Predator spin-offs and a lousy 1990 Gary Busey-fronted sequel, Cam and Tom return for a rumble in the space jungle with producer Robert Rodriguez's Predators. Does it live up to the 1987 Schwarzenegger original? Tune in and find out. In addition, the duo begin carving a tombstone for M. Night Shyamalan's career while trashing The Last Airbender, as well as discuss the disastrous Jonah Hex, the surprisingly awesome Karate Kid and the critically-loved documentary Exit Through the Gift Shop. For no apparent reason, they also spent an unnecessary amount of time yammering on about From Paris With Love. Plus, in Trailer Park Encounters they weigh in on the latest promotional clips for David Fincher's The Social Network, the Bruce Willis/Helen Mirren action comedy Red and Michel Gondry and Seth Rogen's intriguing/troubling Green Hornet. Good golly goombas, I guarantee the glorious results are a hippin-hoppin' hollerin' hootenany for all.

To download, simply right-click and save on the green episode title above. Then you are free to indulge in one of the interweb's most glorious audio-based holy of holies.

P.S. We are also available on iTunes! We kid you not! Simply do a store search for "Epi-Cast" and, GORO-MOTARO!, you can subscribe to our feed and receive insta-dl's (Geek-speak for downloads). Oh, and we are the "Epi-Cast", not the "Epicast." Avoid those blundering buffoons like a gaggle of carnivorous blue-footed boobies.
Posted by Cam Smith at 10:08 PM