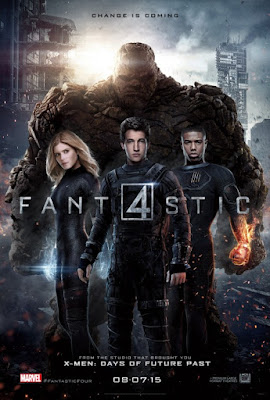 1) FANTASTIC FOUR – Remember the dark days before the superhero movie renaissance? When comic book adaptations were visibly ashamed and resentful of their source material? And the poorly-written characters barely resembled their dynamic literary counterparts in any way, shape or form? Great hopping H.E.R.B.I.E., Fantastic Four sure does! The product of a notoriously turbulent production, Chronicle director Josh Trank’s cinematic Waterloo is a catastrophically incompetent affront to both summer blockbusters and the high standards we now measure caped hero epics against. Cheaply set mostly in two drab locations, this pathetic attempt at a franchise reboot has many of the right elements – a young It-list cast, a promising young genre-savvy helmer, a screenplay co-written by the key scribe behind X-Men: Days of Future Past – but is too embarrassingly short on confidence, smarts and vision to come anywhere close to succeeding. A true folly of its age, it should be mandatorily shown to film students as a dire warning of what can happen when you sign on to an ill-conceived studio tentpole without having gained the crucial job experience necessary to survive. Fantastic Four is so wretched, so jaw-droppingly hopeless on every conceivable level, that it semi-redeems the two earlier sub-par Jessica Alba vehicles, as well as turns the name of Marvel's First Family into a sad and ironic joke.

2) CHAPPIE – While Ex Machina dramatically pondered the scientific ethics, ramifications and wonder that could come from achieving artificial intelligence, Neill Blomkamp’s latest showed us what happens when a self-aware robot goes gangsta and gets viciously beaten with a pipe. Genius takes many forms, they say. Anyways... This major artistic setback for District 9’s once-promising helmer, a woefully confused, grating and sociopathic blend of 80s science-fiction, violent techno-thriller, parental abuse cautionary tale and Die Antwoord music video, is a triumph of technology and a total debacle of storytelling. Sharlto Copley’s titular creation, an innocent mechanical lifeform manufactured for police crowd control, is utterly convincing and sympathetic. Yet, for reasons unclear, we’re supposed to be compelled by bearing witness to the poor frightened thing being tortured, verbally abused and exploited over and over and over again ad nauseam. Chappie isn’t just a bad movie; it’s a morally reprehensible and toxic one, and enduring it is akin to spending two soul-deadening hours in a more extreme version of that creepy droid torture room from Return of the Jedi. 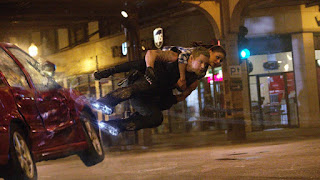 3) JUPITER ASCENDING – Back in 2012, Andy and Lana Wachowski (with Tom Tykwer) made Cloud Atlas, a hugely ambitious jumbled-timeline sci-fi opus featuring a handful of actors in heavy makeup, each playing multiple characters, in a labyrinthine story spanning 500 years. And, impossible challenge be damned, they pulled it off! So what the hell happened with Jupiter Ascending, their allegedly more straight-forward space opera headed by Channing Tatum’s sky-rollerblading, half-canine warrior and Mila Kunis’s intergalactic princess in waiting/luckless janitor?! Exploding at the seams with half-baked plot threads and poorly fleshed out ideas, this bloated mess feels like a dozen cruddy fantasy novels stuffed into one very chaotic narrative that’s long on numbing action sequences and baffling exposition, yet utterly devoid of logic, restraint or fun. It’s a real bummer to see such gifted filmmakers crash and burn so disastrously, stamping their ticket to director jail over a movie destined to be remembered for little more than a silly short-lived meme depicting Eddie Redmayne’s screeching camp overlord villain. They might as well have called the picture Careers Descending.

4) THE BOY NEXT DOOR – Memo to J-Lo: if you’re going to go the trashy erotic thriller route, at least make sure the script is closer to Basic Instinct than Basic Instinct 2. This often snicker-inducing Fatal Attraction rip-off sees Lopez’s lonely high school lit teacher/typical mom-next-door (?!) falling prey to the unstable affections of her neighbor’s buff 'n pouty 20-something nephew (Ryan Guzman). The result? A lurid game of cheeseball leering, conservatively choreographed copulation and – dun dun dun – murder!!! For the majority of its runtime, hacky director Rob Cohen’s umpteenth clunker just sorta plods half-heartedly down a generic, greasy pathway to nowhere. Then the last act hits, and its veritable smorgasbord of barn fires, ultra-graphic eye gouges, gory body crushing and solemn Homer quotations transforms the movie, like a phoenix from the ashes, into absurdly groteque garbage art. This isn’t, of course, meant to imply The Boy Next Door is ultimately worth watching, but rather that you shouldn’t necessarily let anyone dissuade you from searching out a Greatest Hits compilation on YouTube. Or making one. 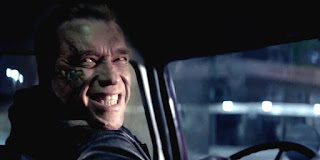