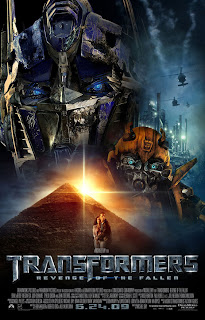 Watching Michael “Blow It All To Hell” Bay’s latest thought-impaired robotic punch ‘em up Transformers: Revenge of the Fallen, the sequel to 2007’s lumbering, migraine-inducing Transformers, it occurred to me that the director doesn’t give two stinking spark-plugs about his titular titanium-plated titans. Sure, we’re treated to endless scenes in which they cave in each other’s craniums with ginormous swords and mega-detonating projectiles, but personality-wise they’re empty vessels, characterized solely by their vehicular appearance and distorted booming voices. It takes a certain amount of determination to cut together 150 minutes of mechanized car-nage, Pauly Shore-level comedy and infinite shots of anonymous military people spouting jargon ala “The target is located!”, and not reveal a single interesting idea about the characters, but boy did he succeed. In fact, the flick could be renamed GoBots or Voltron and only a few superficial changes would be required.

The plot? Oy. Oddly, the script by the shallow writing duo Roberto O 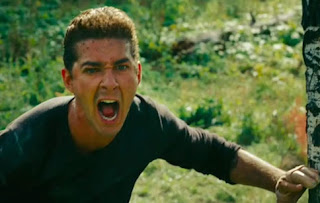 rci and Alex Kurtzman (with added “help” from Reindeer Games scribe Ehren Kruger), is both lamely simplistic and torturously convoluted at the same time. Much like the similarly bloated Pirates of the Caribbean: At World’s End, lots and lots of things happen, but very little matters.
Essentially Revenge of the Fallen can be synopsised as thus: Sam Witwicky (Shia LaBeouf) is departing for Maxim College – where all the women dress like Seymour Street hookers and seem perpetually on the brink of orgasmic ecstasy – when he discovers a fragment of the all-powerful All-Spark, which zaps his head full of alien code. The De 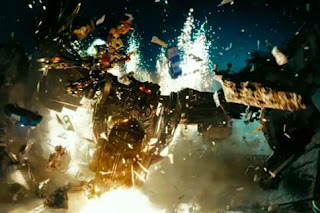 cepticons, under the rule of the disgraced warlord The Fallen, need this implanted information to find a potentially world-ending device that will give them unlimited supremacy. Hence, Optimus Prime and the Autobots, along with a few one-note human sidekicks, must assemble to thwart their wicked scheme. Much joyless brawling, screaming and showering scrap metal ensues.
Transformers die-hards (Trans-fans?) will no doubt devour the numerous diesel-injected dust-ups. There’s an impressive forest-set melee where Optimus takes on multiple mechanized assailants at once, along with an impressively staged gargantuan climax in Egypt which, up to the underwhelming final boss battle, is almost pornographic in its obsession with money shots and Megan Fox’s heaving bosom. But what about the Transformers’ perso 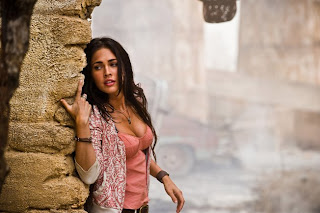 nalities and feelings? What do they think about when not clashing? There are some interesting questions raised – probably unintentionally – regarding the alien race’s birthing process. Do these creatures mate? They appear asexual, and almost entirely masculine. How does an Optimus Prime reproduce? Also, we get a glimpse at Robot Heaven, where angelic Auto-bots – I’m guessing that there’s a Robot Hell reserved for Decepticons – stand in front of the pearly gates bathed in light. Is there Transformer theology? Who do they pray to? Do they dream of electric sheep? Fans might as well bellow these questions into the never-ending void, because the film-makers could care less. They’re vehicles for seeking and instigating mayhem, little else.
...Which would be forgivable if there was a single human performance in Revenge of the Fallen that rose above the level of transparent. LaBeouf, the team’s MVP and everyman, is helpless in the face of Bay’s orchestra of idiocy. He sweats fetchingly, shouts insipid terminology with gusto and gamely charges into the numerous bo 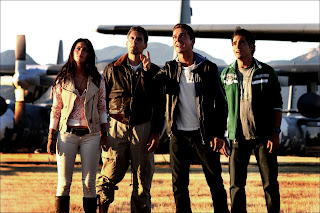 mbastic set-pieces head-first. Megan Fox is window dressing, with nothing to do except be willingly molested by Bay’s salacious camera - although newcomer Isabel Lucas is the primary target for the director’s unique brand of creepy misogyny – while Tyrese Gibson and Josh Duhamel’s soldiers are best represented in an art-imiating-life dialogue exchange wherein they are informed that they are paid “to shoot, not talk”. John Turturro, reprising his annoying Sector 7 agent role, feels unnecessary but somewhat pleasant when compared to Ramon Rodriguez, as Sam’s conspiracy theory-fixated roommate, a narcissistic jerk of a character that’s an endurance test to tolerate.
Bay surrounds his human and mechanical nonentities with liberal heapings of masturbatory CG polish, characters TALKING! LIKE! THIS!, racially insensitive caricatures ( 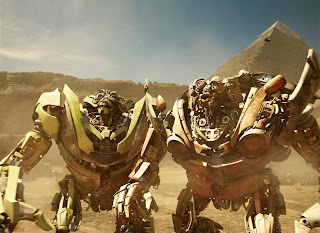 the “twin” Auto-bots Skids and Mudflap have already provoked much passionate debate) and toilet-bowl sex humour. This is the type of film where mini-bots defile Megan Fox’s leg, dogs graphically hump each other (twice!) and a giant Decepticon named Devastator wields wrecking-ball testicles. I don’t necessarily blame Bay for going juvenile, but there is a cold-hearted cynicism at work that feels condescending toward adults and potentially harmful to impressionable children.
Ultimately, Transformers makes the classic blockbuster mistake of not comprehending the difference between enchanting an audience and numbing it into submi

ssion. Despite its massive budget, there’s not a single memorable line or moment of creative inspiration to be found amongst the reckless state-of-the-art computer-born gimmickry. At the conclusion of Revenge of the Fallen little doubt remains that Optimus Prime and his hulking horde of synthetic ciphers will return. Maybe next time they’ll actually let us see the soul beneath the aluminum armor.
2 out of 5
*Originally printed in SFU's The Peak: June 29th, 2009.
Posted by Cam Smith at 12:06 AM