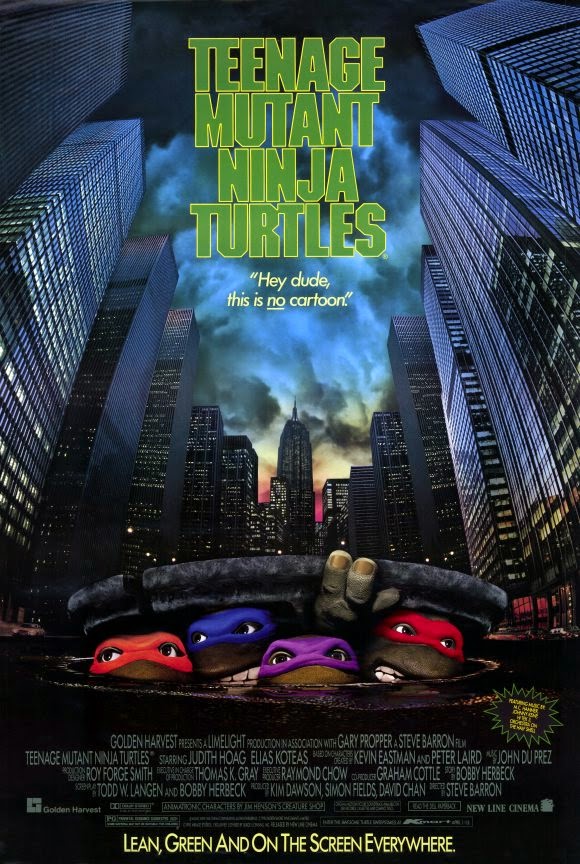 When it high-kicked its way onto silver screens on May 30, 1990 Teenage Mutant Ninja Turtles was less a movie than a momentous event, the inevitable apex of a global craze that had been gathering steam for six years. Originally created by indie comic creators Kevin Eastman and Peter Laird in 1984 as an adult-oriented spoof of popular titles such as “New Mutants,” “Daredevil,” “Cerebrus” and Frank Miller’s “Ronin,” the colorful characters became an instant crossover phenomenon after fledgling Honk Kong toy company Playmates snagged toy rights and CBS began airing the syndicated animated TV series. In no time turtle fever was a very real condition infecting a generation of children, fuelled by an endless supply of action figures, video games, breakfast cereals, Mirage and Archie-produced comic books, etc., and the demand for a live action motion picture adaptation was positively frothing. The ensuing effort, a modest 13.5-million-budgeted venture between then-independent studio New Line Cinema (aka “The House that Freddy Krueger Built”) and Golden Harvest – the HK production company behind martial arts classics featuring Jackie Chan and Bruce Lee, among others – was an instantly adored success story, grossing a tubular $135 million dollars at the domestic office and just over 200-mill worldwide. No matter which way you slice it, that was a lot of green in those days. 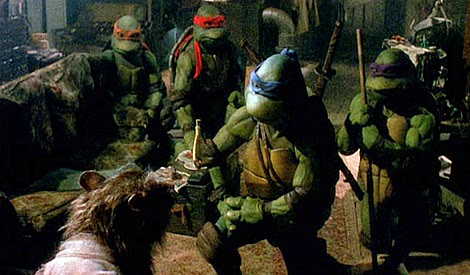 Perhaps not surprisingly, the movie proved less popular with critics and parents groups, who dismissed it as unimaginative crass commercialism, and railed against its dark tone and surprisingly edgy action. And they were not alone. Playmates, concerned by the public outcry and fearing controversy aimed in their direction, refused to manufacture toys based on these new cinematic versions of their top-selling moneymakers. Meanwhile, over in the UK, the censors (longtime adversaries of the TMNT cartoon) took scissors to the film, removing all signs of nunchuks and toning down the half-shelled combat. But, as so often proves the case, the negative press had very little effect (in the short term, that is…), and the target audience was free to revel in the flick’s 93 carefree minutes of wisecracking, sewer-surfing, Foot soldier-stomping fun over and over and over again.

The story of Teenage Mutant Ninja Turtles, ingrained within the DNA of most children of the 1980s, is simplicity personified; New York has become plagued by a mysterious band of ninja thieves called the Foot Clan, who operate under the iron-clad rule of the fearsome Shredder (physical performance by James Saito, voice by David McCharen). After relentless reporter April O’Neil (Judith Hoag) exposes the group she becomes subject to intimidation and attacks, bringing a quartet of unlikely reptilian defenders into her life. Alas, these unlikely squabbling heroes, consisting of group leader Leonardo (David Forman, voice by Brian Tochi), party animal Michelangelo (Michelan Sisto, voice by Robbie Rist), science wiz Donatello (Leif Tilden, voice by Corey Feldman(!)) and surly loner Raphael (Josh Pais), are quickly targeted for elimination and run out of town by the vicious criminal empire, which kidnaps their dear rat sensei, Splinter (voiced by Kevin Clash). However, with the aid of hockey mask-wearing vigilante Casey Jones (Elias Koteas), and a troubled youth named Danny (Michael Turney), our weapon-wielding protagonists find the strength within themselves to win the day, save their master and celebrate in style with plenty of (Domino’s©) pizza. 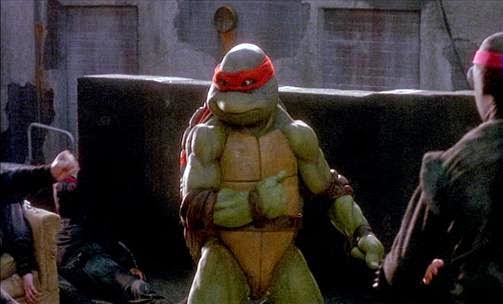 Although Tim Burton’s bank-breaking hit Batman, which arrived just one year earlier, was an obvious influence aesthetically, the film doesn’t strive to adopt that flawed milestone’s hyper-convoluted and occasionally muddled story structure – a sadly common trait in modern blockbuster scripts. Instead, it tells a remarkably economical, breezily energetic (the tight, punchy pace can be attributed to the invaluable cutting skills of Sally Menke, Tarantino’s late, great editor, making her Hollywood debut) and disarmingly sweet story of brotherly love, the bond between fathers and sons and the need for family, dressed up with roundhouse kicks and katana blades. It may not be high art, or stellar family entertainment exactly, nonetheless it remains undeniably charming, funny and often kinda exciting. 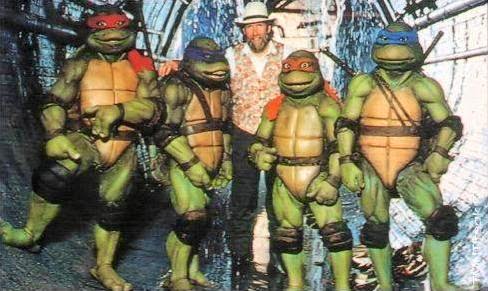 Coincidentally, it has also become something of a time capsule. Alongside the same year’s The Witches, this film was one of the final productions to be graced by the legendary Jim Henson, who succumbed to a bacterial infection just two weeks prior to release. His Creature Shop was responsible for bringing the titular anthropomorphized amphibians and Splinter to life, and it’s remarkable how life-like, endearing and expressive their efforts prove. Blending puppetry, bulky animatronics and actors in suits, the team managed the impossible by crafting fantastical creations that are convincingly credible both still and in motion, as evidenced throughout the clever fight sequences. There’s a tactile authenticity to them; they look and feel like (bizarre) denizens of our world, and, miracle of miracles, are never unpleasing to the eye or jarring. They are genuine works of movie magic, that – through no shortage of care, sweat and thought – are capable of impressive range (watch the sensitive reunion scene between Leonardo and a reawakened Raphael in a bathtub and try to disagree), and serve as a memorable final note for Henson’s astonishing career to go out on, just three short years before Jurassic Park would stomp into theatres and officially usher in the digital age.

The movie also marks the beginning of the end for cinema’s two-decade-long love/hate affair with New York City as a dangerous hub of urban decay. At the time of release, the metropolis was experiencing its highest violent crime rate – over two and half times the 2012 stats - in recorded history, largely due to a catastrophic crack epidemic, and that fear, griminess and pessimism colors much of Teenage Mutant Ninja Turtles (never mind that it was mostly shot in North Carolina). Nowadays the film’s depictions of gloomy, foreboding subway stations, ugly crumbling buildings coated with graffiti and empty night streets dominated by roving youth gangs are wildly at odds with our impressions of the Big Apple. And though there are certainly plenty of artistic liberties being taken with this 1990 representation, it ultimately serves as an entertaining, evocative reminder of just how negatively the media and outside observers once perceived the pre-Giuliani cityscape. 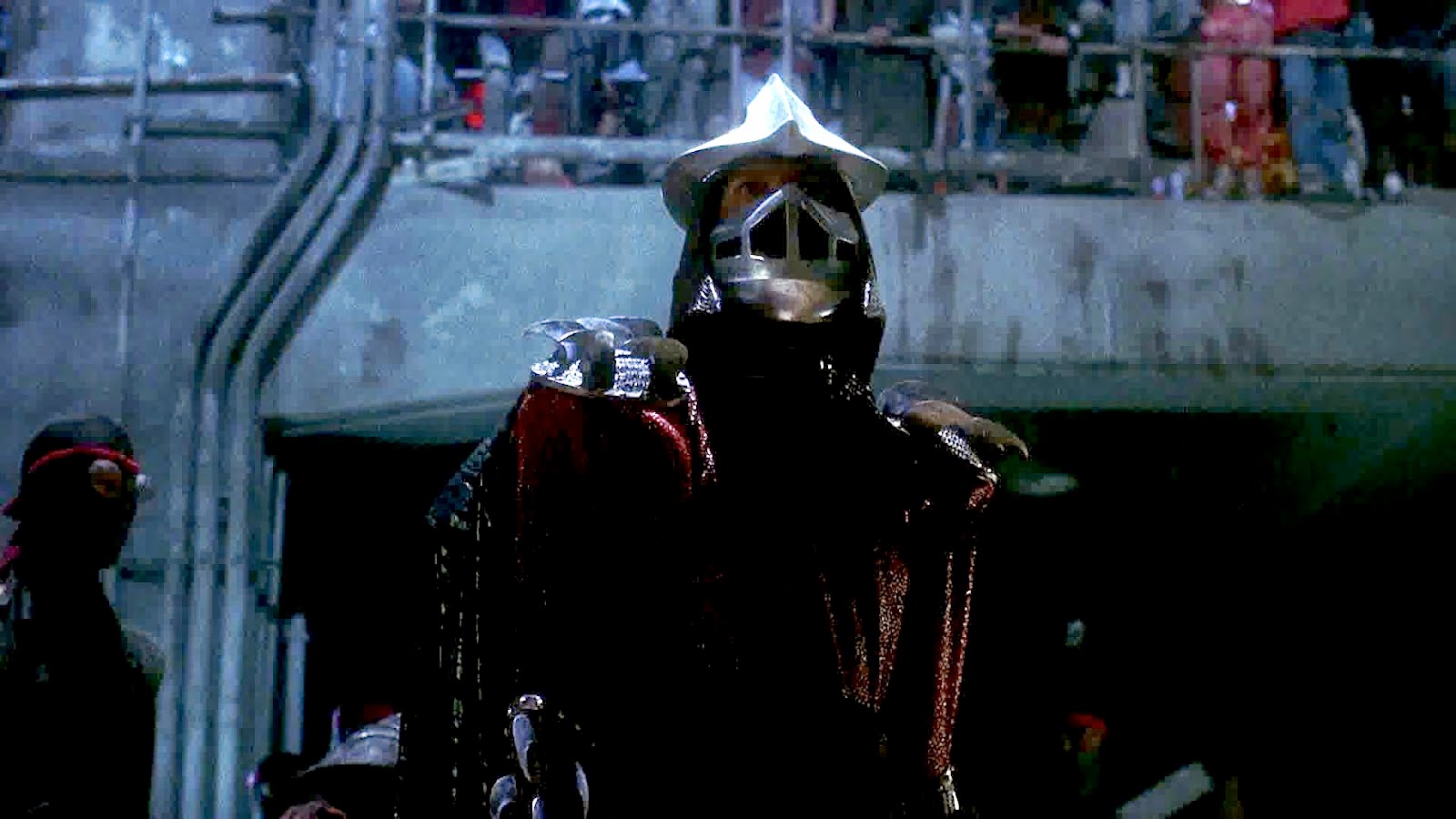 While Teenage Mutant Ninja Turtles, thus far, seems mostly significant for signaling the end of noteworthy eras, it did help play a valuable role in setting a certain standard for future cinematic superhero tales. Despite Richard Donner’s sensational Superman in 1978 and Burton’s aforementioned Batman, the infant genre would take time to find its legs – until 1998’s Blade or 2000’s X-Men, depending on who you ask – and the picture deserves props for its low-key efficiency. Skillfully weaving its silly mythology and multiple outlandish personalities into a basic, easily accessible narrative, Barron and writers Todd W. Langen and Bobby Herbeck accomplish something of a wonder with minimal fuss. Well aware they were making a children’s flick, they admirably refuse to pander or water down the material’s overt weirdness; cleverly nailing all of the necessary details (compare the goofy, engaging exposition found in the April-narrated opening or Splinter’s old kung fu movie-toned stories to the countless frantic info-dump scenes found in current summer tentpoles) without forsaking their irreverent tone or stalling out. This is very silly stuff, and it’s nice to see it being respected, not condescended to like, say, 1987’s Masters of the Universe, which was “reimagined” as a derivative Star Wars riff. Sure, the film is naïve and a bit archaic when placed against today’s bumper crop of costumed crimefighter epics but it continues to be one of the few genre forebears still worthy of remembrance.

Of course, it’s also just a good, lively time at the movies. Nicely blending the gritty, pop-culture-skewering toughness of Eastman and Laird’s Mirage Comics adventures and the wackier Saturday morning cartoon into a consistent, unified whole, Barron and crew’s endeavor succeeds significantly on the strength of its personalities. Few would credit our butt-kicking brothers with having multi-dimensional personalities, however damned if the writers don’t milk their single notes, and intentionally dorky verbal sparring sessions, for everything they’re worth (with the possible exception of Donatello, who feels a little lost function-wise), never breaching into the realm of insufferableness. Raphael, all pent up discontent, attitude and frustration, remains the most compelling – who couldn’t, at some point in their younger years, relate to his impotent anger – and is the only turtle with a recognizable character arc, yet doesn’t stand in the way of everyone getting their own big moments to shine (gotta love Michelangelo’s show-stopping pre-clash nunchuk demonstration, or Leonardo leading a meditative fireside séance with Splinter’s Jedi force ghost). 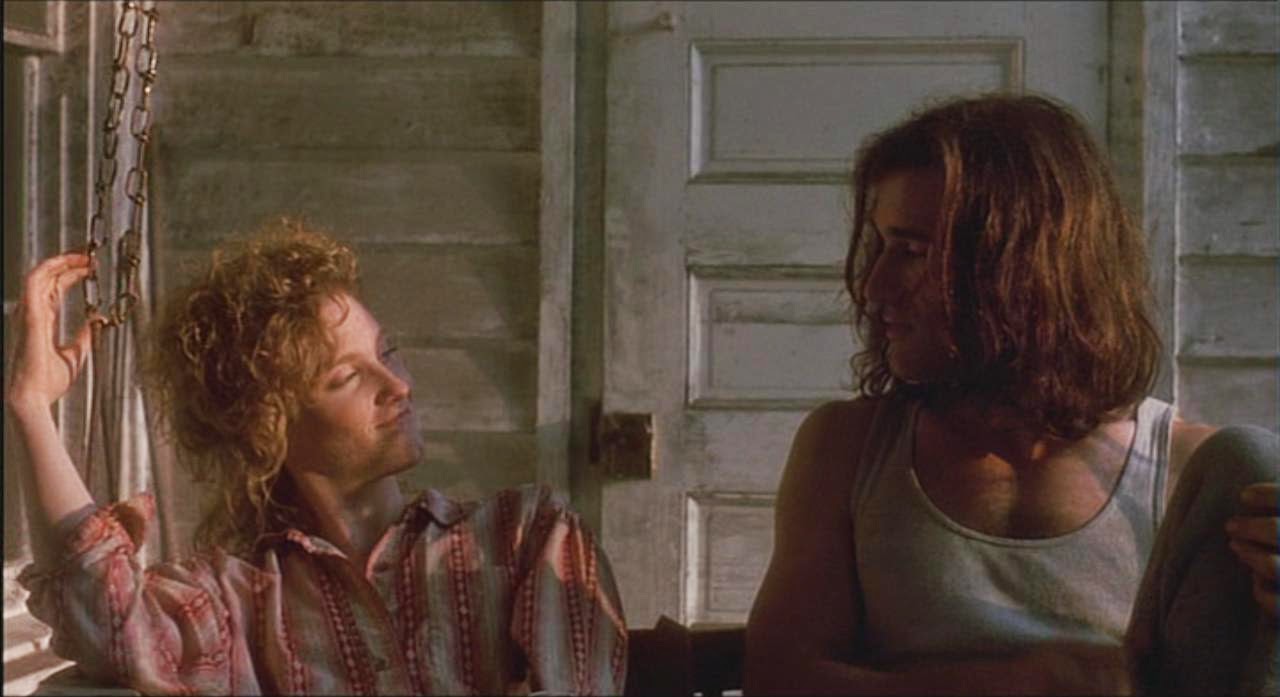 The amiably vanilla Hoag, saddled with the thankless, albeit crucial, role of remaining a neutral presence and selling the illusion of her foam and latex costars, brings enough pep and warmth – sort of a Margot Kidder lite - to ground everything in (magical) reality. It’s too bad she didn’t stick around for the sequels, honestly. She’s especially engaging opposite Teenage Mutant Ninja Turtles’ secret Han Solo-ish weapon; rascally, rough-around-the-edges Elias Koteas as the cricket bat-swinging Casey. Fashioning an attention-grabbing performance from B-movie material, the character actor slyly runs away with every single one of his scenes (note his silently comedic shrug upon encountering a chained up Splinter) and leaves you wanting more. Though he wound up going the less conventional career route, with intense turns in pictures such as Cronenberg’s Crash, Malick’s The Thin Red Line and Egoyan’s Exotica, his star-quality charisma is impossible to deny here.

So what doesn’t work quite as well anymore? For starters, the threat of the Foot Clan now seems oddly inconsistent. Given their seemingly tightly-honed operation, and the ease with which they track down and nab Splinter, it’s a little dubious that it takes them so long to confront the turtles. And why doesn’t anyone try to pursue them once they escape to April’s cottage in the woods (do none of these delinquent kids drive? What about Tatsu? No Shreddermobile?!)? For all of the script’s strengths, occasionally the logic falters. Because he’s such a magnetic presence, it’s easy to forgive the lack of motivation behind Casey Jones joining the cause, although we probably shouldn’t. And, as enjoyable as the pop-culture references can be, there are some serious groaners on display. Arguably the worst offender is Raphael’s rooftop A Streetcar Named Desire Stanley Kowalski impression, which transpires during a key emotional point in the story, and just couldn’t fall flatter. 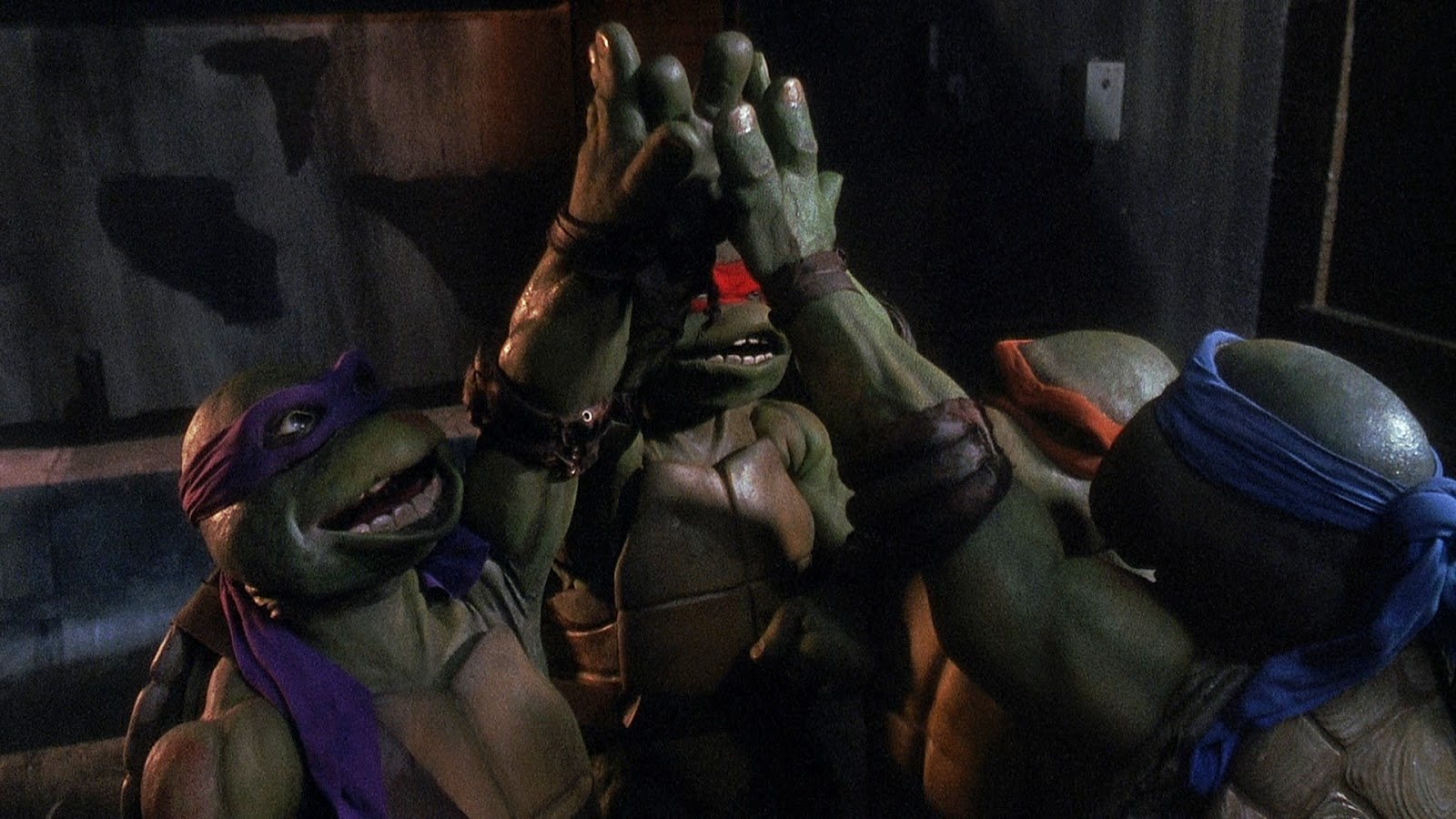 That said, quibbles aside, Teenage Mutant Ninja Turtles hasn’t lost its ability to trigger small bursts of adrenaline straight to the brain once the killer soundtrack kicks into gear and the fists start flying. Sincere in its cheerfully shallow aim to wow legions of kids with cornball humor, hyperactive hijinx and martial arts mayhem, director Barron and his team deliver enthusiastically and single-mindedly, injecting enough adult-friendly humor along the way to bridge the demographic gap. Almost two-and-a-half decades since making the leap to celluloid, these dudes continue to abide. Righteously.

Pizzas Consumed: 2. One delivered to their sewer home by a bewildered Domino’s © delivery man, and a second in the form of leftovers at April’s pad. A potential third is deemed inedible due to its liberal topping of “penicillin.”

Michelangelo: "No joke. The only thing safe in the woods... would be the trees!"

Sagest Splinter Wisdom: “Possess the right thinking. Only then can one receive the gifts of strength, knowledge and peace.”

Most Menacing Villain Line: Shredder: “You fight well... in the old style. But you've caused me enough trouble. Now you face: the Shredder.”

Uncomfortable Adult Humor: Casey Jones reacting to being called claustrophobic by threatening “You want a fist in the mouth?! I’ve never even looked at another guy before!”