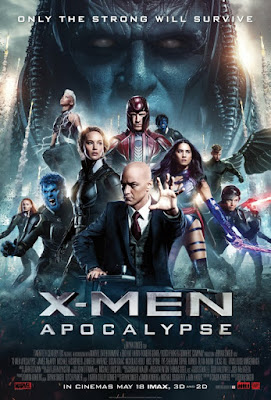 Ever since bursting onto the silver screen and ushering in the blockbuster superhero craze in the summer of 2000 Marvel’s X-Men have battled an unending onslaught of formidable and colorful foes. Usually, these battles have generated big thrills for audiences, and allowed the filmmakers to infuse these poppy comic-book morality tales with of-the-moment social commentary and intriguing subtext. X-Men: Apocalypse, on the other hand, delivers a serious game-changer; a big bad who achieves the ghastliest of triumphs in singlehandedly sinking the entire movie around him into a muddy abyss of meaningless mediocrity.

Although it seemed like a promising concept to introduce the hulking blue OG mutant as the primary antagonist for this sixth adventure (even Magneto needs a breather occasionally), in execution the character is a complete and total disaster. Somehow managing to render Oscar Isaac – among the most electrifying actors working today – unwatchable, Apocalypse is an abysmal amalgamation of horrendous makeup work and a total absence of personality, compelling motivation or philosophical interest. And, unlike past lame-duck genre villains like Thor: The Dark World’s Malekith or Amazing Spider-Man’s Lizard, this wheezing gasbag is given copious amounts of screentime to bore fans to sleep with endless ineptly written quasi-mystical monologues. A-Narcolepsy is a more fitting moniker for him. 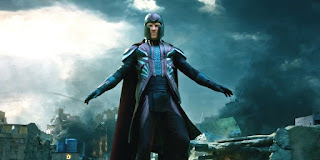 It shouldn’t have been this way. After Fox drove the franchise off the ever-loving cliff with The Last Stand and X-Men Origins: Wolverine, the one-two punch of Matthew Vaughn’s First Class, and returning series godfather Bryan Singer’s Days of Future Past reignited the brand and opened the door to boundless opportunities. So why does Apocalypse feel so creaky, obligatory and behind the times?

The sad part is it actually starts off well! After an enjoyably goofy flashback involving the entombing of Isaac’s evil En Sabah Nur in ancient Egypt, the picture engagingly bounces around, reintroducing us to the colossal cast and establishing the newbies. Unfolding in an alternate 1983, ten years (?!) after the Sentinel project-thwarting exploits of Days of Future Past, Apocalypse sees the former teammates scattered across the globe. While Professor Xavier (James McAvoy) and Hank McCoy (Nicholas Hoult) focus their efforts on easing the lives of troubled X-kids - such as Sophie Turner’s Jean Grey and Tye Sheridan’s Scott Summers - Mystique (Jennifer Lawrence) has embarked on a solitary stealth war against mutant prejudice and Magneto’s (Michael Fassbender) become a quiet family man in his native Poland. 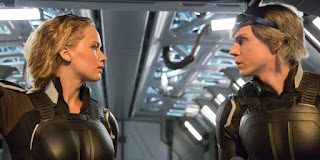 Fate and superhero movies being what they will, however, things rapidly go awry. Magneto’s peace proves tragically short-lived, fueling a self-destructive quest for revenge. His thirst for vengeance brings him to the attention of the reborn Apocalypse, who enlists him – alongside Storm (Alexandra Shipp), Psylocke (Olivia Munn) and Angel (Ben Hardy) - as one of the Four Horsemen who will aid him in his civilization-ending game plan. After a violent attack on the X-mansion, Xavier and his youthful team, which includes the ultra-popular Quicksilver (Evan Peters) and Nightcrawler (Kodi Smit-McPhee), must band together in order to take down their gravest threat to date.

As amusingly convoluted as these X-film narratives can be, the modest joys offered by Apocalypse come in the table setting and diversions, not the deadly dull central plot. It’s genuinely fun to watch Cyclops’s mini-origin scene where he learns about his powers, or follow along with him, Jean and Nightcrawler as they escape the school to hang out at the mall (and slag Return of the Jedi for being a typical lousy threequel; a swipe aimed at Last Stand but applicable here). The classic Stan Lee or Chris Claremont eras of comic stories always nimbly balanced high-spirited good times with serious gravitas, and Singer – as he did in X-Men and X2- again strikes that right balance with the youth-oriented escapades and the heavier Magneto/Charles/Mystique material. Even an inelegantly cut-and-pasted section featuring a major cameo you can no doubt guess manages to succeed on pure energy despite being almost hilariously pointless. 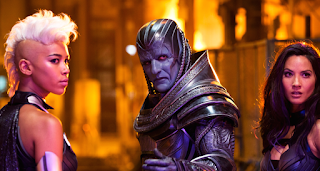 Unfortunately, just as we’re pulled into the lives of these endearing individuals, the omnipresent threat of Apocalypse keeps rearing its head to suck the life out of the proceedings. Screenwriter Simon Kinberg (Days of Future Past, Fantastic Four 2015) never cracks the character and keeps falling back on repetitive lunk-headed dialogue that throws around weighty terms until its blue in the face (pun intended) without actually adding up to anything substantial or interesting. At one point a TV prominently shows an old Star Trek episode, where the Greek god Apollo is revealed to be an alien who was cast from Earth after humankind no longer needed divinity for inspiration, which appears to hint at the film’s thematic objective but yeegads did it dissipate into nothingness in the transition from conception to reality. So instead we’re left with way too many scenes of Isaac gasping, brooding and staring off into space before the big finale.

Alas, those crossing their fingers for a slam-bang payoff will be disappointed, as the third act is an insufferable disaster. Abandoning all attempts at creating an absorbing conflict, Singer stages a massive multi-mutant war that’s embarrassingly clumsy. Pity this film for opening so shortly after Captain America: Civil War because that smash hit’s unforgettable airport throwdown shows up Apocalypse’s Cairo-set climax six ways from Sunday. As the cast strikes silly poses and wages overly-gymnastic wire-fu combat in front of awful green-screen backdrops, in a sea of glitchy CG swirls and nonsense, it’s hard not to feel sorry for the hours of effort that went into pre-shoot training. The helmer, who actually exhibits technical competence earlier when staging a frenzied cage fight and another show-stopping Quicksilver sequence, bungles moment after moment and fails to grasp any understanding of geography or communicating the basic function of each character within the scene. God only knows what direction poor Michael Fassbender was operating under as he hung from a cable grimly visualizing the hokey 1s and 0s engulfing him. 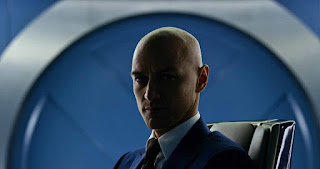 A strange feature of these pictures has been their ongoing ability to attract stellar talent and then shirk from exploiting it to its fullest potential. McAvoy and Fassbender are again the MVPs, and perform the heavy lifting, yet Apocalypse doesn’t pay off their relationship with the fireworks it demands. Similarly, despite completing a hugely significant arc over three installments, the impact of Mystique’s journey is blunted by Lawrence’s drowsy “Get me outta here!” performance. Of the up-and-coming (read: cheaper) stars Smit-McPhee makes for a fantastically naïve and lovable Nightcrawler, while Turner and Sheridan are charismatic enough to dodge unkind comparisons to Famke Janssen and James Marsden. And, playing the infinitely entertaining Quicksilver, Peters has fast and confidently grown into the franchise’s most invaluable scene-stealer.

This being an X-Men film, though, there’s always a few mutants given frustrating short shrift, with Psylocke, Angel and Storm drawing dead this time around. If you’re not going to develop three of the Four Horsemen, why bother wasting so much time setting them up? Also, Rose Byrne, reprising her First Class Moira Mactaggert role, is a somewhat baffling addition who initially acts as an exposition machine before assuming the position of a glorified background extra once the world needs saving. 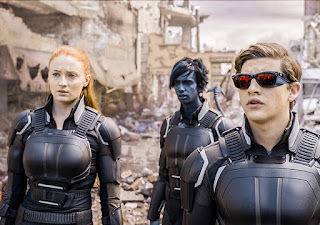 Despite Singer and company persistently hyping a seventh installment in this continuity, the stiff and awkward Apocalypse signals a desperate need for reinvention and new creative blood. Being the first of the superhero movie mega-properties, X-Men has earned its rightful place in cinema history and maintained an admirable consistency of vision, even when quality occasionally flagged. Yet with the unconventional Deadpool, and in-development New Mutants, aspiring to make the X-verse fresh and exciting again, these films have sadly lost their formerly unique luster. In short, these mutants need to evolve in order to truly thrive again.