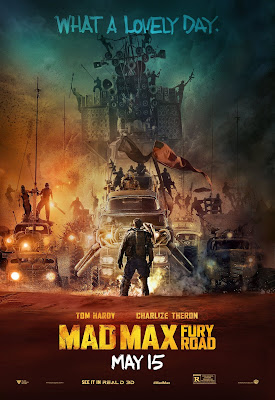 1) MAD MAX: FURY ROAD – Prior to the release of George Miller’s fourth post-apocalyptic explodaganza, there were plenty of reasons to be nervous. In the wake of the Star Wars prequels, Indiana Jones and the Kingdom of the Crystal Skull and Prometheus, it was hard to be confident in the theoretically exciting prospect of a genre visionary revisiting his fictional universe after decades away. But we were wrong to doubt the ingenious Australian auteur. Dead wrong. Fury Road is the epitome of pure cinema in 2015; a blistering and rip-roaring breakneck assault that made the majority of big budget entertainments look low on gas by comparison. An endlessly innovative fever dream of classically constructed action chaos, flawlessly immersive world-building, next-level craftsmanship and timely social commentary, Miller’s masterpiece dynamically re-emphasizes his distinguished status as one of the premier visual storytellers of our time. Gorgeously shot by veteran director of photography John Seale (nearly every wondrous frame is suitable for wall hanging), edited to machine-tooled perfection by Margaret Sixel and vigorously grounded by instantly iconic headliners Tom Hardy and Charlize Theron, Mad Max’s latest scorch-the-earth spectacular acts as a defiant sign post to the next generation of aspiring blockbuster helmers: “Get on your game or get off the road!”

2) THE HATEFUL EIGHT – Bless the movie gods for Quentin Tarantino! Precious few filmmakers are capable of not only exceeding lofty expectations, but doing so nearly every time at bat. Storming theatres like a stallion stampede from hell, the celebrated director’s meanest and most politically provocative effort to date is a relentlessly cruel Agatha-Christie-gone-blood-simple chamber room mystery ablaze in monstrous male masculinity and post-Civil War hostility, misogyny and racism. Working with a legendary assembly of actors, including Kurt Russell, Jennifer Jason Leigh, Walton Goggins, Tim Roth and go-to muse Samuel L. Jackson, Tarantino delivers another unforgettable yarn - this time flavored with liberal homages to Leone and Carpenter (with a pinch of classic Raimi) - boasting plenty of characteristic swaths of hyper-quotable dialogue, comically gruesome splatter and sly meta-commentary on storytelling and performance. Where this effort really separates itself from the rest of the auteur’s combustible canon, however, is in its anger. Unlike Django Unchained or Inglourious Basterds – where brutal violence was employed in order to achieve catharsis for historical atrocities – The Hateful Eight sees the helmer using ugly 19th century intolerance as a smokescreen in order to uncomfortably set his sights squarely on present day injustices. And, over the course of almost three exhilarating hours, his finger rarely ever relaxes on the trigger. 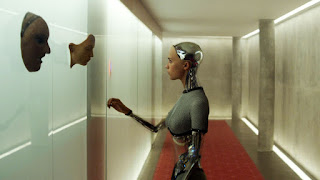 3) EX MACHINA – After spending over a decade penning clever sci-fi scripts for geniuses like Danny Boyle (28 Days Later, Sunshine) and Mark Romanek (Never Let Me Go), screenwriter Alex Garland finally took over the director’s chair and proved a force to be reckoned with. Starring Oscar Isaac as a calculating and reclusive alpha-nerd genius intent on proving the infallibility of his breathtaking new A.I. experiment (Alica Vikander) to Domhnall Gleeson’s insecure underling programmer, Ex Machina is a hypnotically chilly, smart and precise exercise in tension and heady big idea concepts. Upon first viewing, the picture is a dazzling, unsettling and brilliantly acted thriller that pulls the rug right out from under you. But subsequent viewings provide the richer experience, as the film’s thematic explorations of gender, artificial life, scientific ethics and modern technology-induced isolation come more and more into focus. And if that’s not enough of a sell, it also boasts bar none the most bitching dance-floor boogie session in ages.

4) STEVE JOBS – Equal parts Birdman and The Social Network, director Danny Boyle and writer Aaron Sorkin’s entrancing and unconventional biopic of the polarizing deceased Apple co-founder is a scintillating showcase of crackerjack dialogue and captivating personalities. Told in three distinct acts, in which Jobs (Michael Fassbender, wonderful as always) preps in real time for a trio of major product launches, the film builds to one fireworks-laden crescendo after another as Sorkin bounces his collection of exceedingly smart real world personalities off one-another to increasingly eruptive effect. Boyle, utilizing his considerable theatre-directing experience and toning down the trademark stylistic quirks, creates a tense, animated environment for his assembly of A-grade talent – Kate Winslet, Seth Rogen, Jeff Daniels, Michael Stuhlbarg and Katherine Waterston – to play in and skillfully captures each of their volatile encounters with raw, keenly observed authenticity. Steve Jobs undeniably plays fast and loose with chronology and facts, but ultimately in the service of creating a rewarding, uncompromising and complicated look at the man, his ego, his intellect and, ultimately, his legacy. 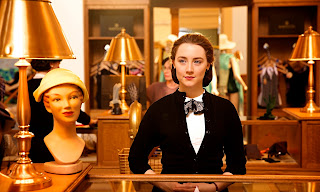 5) BROOKLYN – We all go to the movies for different reasons. Sometimes we wish to be wowed by state of the art visuals, or strange new places. Or to laugh, cry or be scared senseless. Other times we just want to watch a film that makes us feel good inside, and there was no picture last year warmer or more irresistibly charming than Brooklyn. Helmer John Crowley and screenwriter Nick Hornby’s adaptation of author Colm Tóibín’s sweet-natured immigrant tale, which follows a sheltered Irish girl (Saoirse Ronan) as she transitions from homey small town security to intimidating 1950s New York big city life, was an enchanting, funny and unabashedly romantic sleeper gem. Surprisingly suspenseful in its own low-key way - courtesy of an involving and difficult central love triangle involving potential suitors Emory Cohen and Domhnall Gleeson – Brooklyn is an unflashy triumph about good, interesting people aspiring to achieve love, meaning and a place to call home.

6) STAR WARS: THE FORCE AWAKENS – As remarkable as all of the titles on this list are, when all is said and done it’s fairly certain 2015 will go down in the books as the year Star Wars victoriously reasserted its reign of pop-culture dominance. And - you know something? - it’s hard to be pessimistic about the franchise’s impending prolificacy after being swept up in J.J. Abrams’ high-spirited and lovingly rendered series restart. Handed an almost unwinnable battle, the ever-resourceful director proves uncannily adept at balancing the old with the new, hitting all the right nostalgic buttons while opening up the galaxy to an infinite future of rousing edge-of-your-seat adventures. While The Force Awakens isn’t necessarily a great film, as the 1977 original and The Empire Strikes Back were, it’s a top-flight entertainment and – most importantly – a great Star Wars film that introduces compelling new elements and characters (Rey and Kylo Ren, in particular) that leave you urgently yearning to punch the hyperdrive to 2017 for the next breathless chapter. 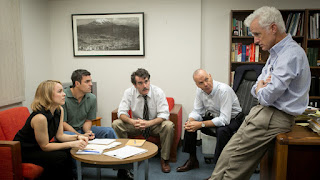 7) SPOTLIGHT – As evidenced by past successes The Station Agent, The Visitor and Win Win writer-director Tom McCarthy has long been fascinated by unlikely makeshift family units and what makes them tick. This obsession carries over into Spotlight, his spellbinding fact-based account of the Boston Globe’s shocking 2001 investigation into the Catholic Church’s child molestation cover-up, which taps into the infectious pulse of the newsroom, and the diverse workaholic personalities working within it, with the electric immediacy of a modern day All the President’s Men. A true marvel of fly-on-the-wall, ensemble-driven dramatic storytelling, McCarthy’s latest is a mesmerizing procedural, skillfully carried by a top-notch cast featuring Michael Keaton, Mark Ruffalo, Rachel McAdams, Liev Schreiber and John Slattery. More importantly, though, it’s also a frustrated, damning indictment of a corrupt and broken institution responsible for committing irreparable damage to countless innocent young lives.

8) ROOM – Like a tiny beacon of light in a sea of darkness, Lenny Abrahamson’s engrossing Room is an affecting tale of hope and perseverance in the most bleak and crushing of circumstances. When first we meet Brie Larson’s tortured protagonist, she’s been raising her five-year-old son (Jacob Tremblay) in captivity for years after being abducted and imprisoned as a teenager by a sadistic rapist. However, rather than simply wallow in misery, the film finds boundless inspiration in her enduring strength and unwavering resolve to protect her son – a goal further complicated after they gain freedom and must navigate a world he’s never been exposed to and she’s long become distanced from. Larson, who has never been better – which is pretty incredible after her towering turn in 2013’s Short Term 12 – is revelatory, as is her young co-star, whose inquisitive naivety and optimism proves their eventual salvation. Don’t let the grimness of the subject matter dissuade you, Room is a stirring and poignant testament to the unconquerable human spirit. 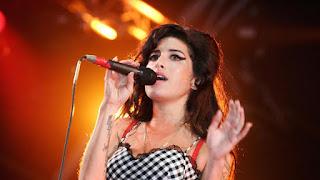 9) AMY – This astonishingly well-researched and chronicled documentary on the tragic short life of English singer Amy Winehouse is the most haunting picture of 2015. Utilizing a seemingly limitless library of invaluable audio and video recordings, director Asif Kapadia paints an unprecedentedly intimate and detailed portrait of the tormented young musician; one that alternately serves as an emotionally devastating tribute to her incredible gifts, and a wrenching, infuriating condemnation of the toxic personalities, exploitative industry and sadistic celebrity culture that ultimately dragged her down. While Winehouse’s over-simplified “Behind the Music” rise and fall narrative is well known, and still relatively fresh in our memories, Kapadia’s loving eulogy mourns a complex and vibrant young woman, whose spiral into the demon-fueled abyss was only accelerated by the lack of compassionate helping hands willing to reach in to offer assistance.

10) THE WALK – On paper, Robert Zemeckis’s impressive high-tech retelling of performance artist Philippe Petit’s audacious and obscenely dangerous 1974 high-wire journey between the World Trade Center towers seemed like a truly terrible idea. After all, how do you match the dramatic power of James Marsh’s 2008 Oscar-winning documentary Man on Wire, which already thoroughly covered the entire madcap quest beat-by-beat? The answer: by doing something different. Instead, the ingenious director lovingly crafted a romantic and exuberant celebration of art, life and human ingenuity, dressed up in propulsive heist movie conventions and populated by a team of fun oddballs (headed by a truly committed Joseph Gordon-Levitt), that climaxes in a beyond beautiful big screen spectacle that’s both deeply moving and magically awe-inducing.