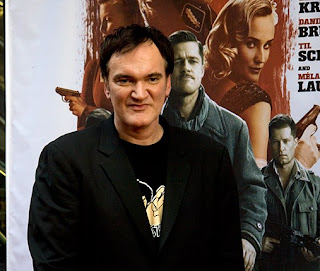 Voltaire. Locke. Darwin. Kant. All great minds to be sure, but, to be frank, a bunch of dullards. Want a party in your ears? One which will tickle your frontal lobes and perhaps inspire the next evolutional step in mankind? Then download the latest Epi-Cast, which features two virtuoso rants from the very talented Mr. Wytrwal, rants which take human speech to a level of artistic genius never before thought possible. There's also the incisive rapier wit of very special guest star Kris McRonney, who helps the much-beaten-down Epi-Cast hosts crawl out of their post-summer funk and rediscover the magic which can only found in mocking crappy slasher movies and bowing at the altar of Quentin Tarantino.

Epi-Cast: Episode 17 - "An Inglourious Discourse"
Wherein Cam, Tom and Kris hoist up their fanboy flags (or at least 2 out of the 3 of them...) in support of Tarantino's stupendous WWII epic. Yes, I realize how dirty that sounds. Grow up, all of you. Anyhoo, they also review brand-spankin' new films both soul-molestingly wretched (Halloween II, The Final Destination, G.I. Joe) and angel-wings-dazzling wonderful (The Cove, District 9). Not to break the routine too much, Tom once again impresses with his takes on a pair of films no one in their right mind would bother taking the time to watch (Lions For Lambs and, um, Severed Ways). As expected, they also tackle the most glossy and shiny new trailers, providing pithy flash judgments on the new promo spots for Chris Nolan's Inception, Michael Moore's Capitalism: A Love Story, Joe Johnston's The Wolf Man and the Grant Heslov-directed George Clooney comedy The Men Who Stare At Goats. It's one unholy chunk of an episode so big that it also required the recording of a 30-minute spoiler-filled discussion on Basterds which will be posted later in the week. Yowza. Enjoy people.
To download, simply right-click and save on the green episode title above. Then you are free to indulge in the interweb's finest joys.
P.S. We are also available on iTunes! No guff! Simply do a store search for "Epi-Cast" and, OTTO-OCTAVIUS!, you can subscribe to our feed and receive insta-dl's (Net speak for downloads). Oh, and we are the "Epi-Cast", not the "Epicast". Avoid those nitiwt clowns.
Posted by Cam Smith at 9:38 PM