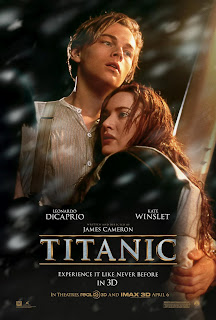 James Cameron’s Titanic is a glorious feat of epic-scale blockbuster engineering. Revisiting the sweeping, tragic tale of the unsinkable ocean liner nearly 15 years after it dominated theatres for a record 15 weeks, tallied up 11 Oscars and sparked an adoring inferno of Leo-Mania, it’s impossible not be impressed by the brilliance of its construction. Blending together grand technical ambition and intimate, starry-eyed romance, the innovative writer/director managed a nearly impossible feat; he produced a box-office behemoth that truly spoke to every possible demographic. It was the perfect picture arriving at the perfect time, boldly furthering the CG revolution while simultaneously celebrating Old Hollywood storytelling. Indeed, like the doomed ship itself, it was an exorbitantly costly vision that stood with one foot planted firmly in the past and the other reaching fearlessly into the bright, optimistic future.

It’s unfortunate, though understandable, that the film’s luster has been tarnished by aggressive backlash. Intense hype can only last so long, and it’s easy to become disillusioned and embarrassed by past obsessions. Nonetheless, to dismiss Titanic as being “uncool” is to miss the point entirely; Titanic was never meant to be cool in the first place! Arriving in theatres during the hip, ironic indie boom sparked by Pulp Fiction, Cameron’s wonderfully square portrait of idealized young love is, in the tradition of the very best Tinseltown epics, defiantly earnest and melodramatic. Nothing is funny about all-consuming first love – at least not to the participants – and the movie makes no efforts to downplay the swooning exhilaration shared by scruffy artist Jack and troubled upper-class Rose (perfectly cast Leonardo DiCaprio and Kate Winslet, generating chemistry that radiates from the screen). There’s an unmistakeable purity in their hoary amorous declarations and unabashed naivety. And, because most of us have occupied a similarly foggy headspace at some point in our lives, we not only feel nostalgia viewing their archetypal affair, but also become profoundly invested in preserving their happiness. 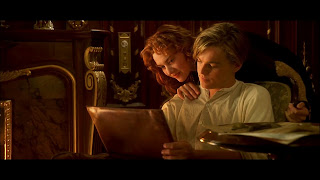 Cameron is not a particularly emotional director. Although his 1985 break-through, The Terminator, featured a sweet romance between Linda Hamilton and Michael Biehn, he’s usually credited more for crafting smart, boundary-pushing spectacle than relatable human narratives. Titanic is easily his most tender and sensual picture. Sure, his dialogue may occasionally veer into cornball territory (“A woman’s heart is a deep ocean of secrets…”), however real care has been taken in portraying the heightened emotions and evolution of the central relationship. Few moments in modern cinema are as innocently erotic as the famous nude sketching session, or as deliriously joyful as the whirling Irish dance in the steerage section. And the sight of the two leads, together against the world, embracing on the bow of the majestic ship, is one of those powerfully unforgettable images that only cinema is capable of creating.

As an action director, Cameron is in a league all his own, and his staging of the climactic destruction of the doomed vessel is a breath-taking orchestra of chaos that begins in disquieting serenity (those flares sure look beautiful in the pitiless night sky) and ends in nightmarish pandemonium. The effects, of course, remain brilliant, but what’s even more impressive is the helmer’s flawless ability to convey the geography of the unfolding events. Due to the fact we’ve been subtly touring the ship for the preceding two hours, rarely is there a moment where we don’t innately comprehend where our heroes are or where they have to go. It was also an ingenious idea to include a computer-rendered recreation of the ship’s demise in the movie’s often clunky opening modern day bookend. By filling us in on the overall picture, we’re free to remain focused firmly on the characters, not on the expository details of every stage of the destruction. 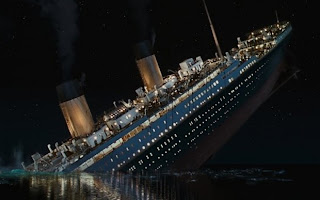 Like the best blockbusters, Titanic remains just as relevant today as it was in 1997 – maybe even more so. There’s a sense of timelessness to the picture’s themes and artistry that allows it continue to speak to the time it’s viewed in. The class war, between Jack and his fellow steerage passengers and the upper-crust likes of Rose’s mother (Frances Fisher) and steel heir fiancé (awesome ham Billy Zane), is especially pertinent nowadays, with the high profile Occupy movement and struggling 99 percent. It isn’t as easy to flippantly dismiss their outmoded early 20th century mindset now as it was during the original release. Similarly, watching the bodies plummeting from the capsizing liner, one can’t help but be reminded of our own great modern tragedy, the 9/11 World Trade Centre attack.


The film’s much-ballyhooed $18-million-dollar 3D transfer, in the works for several years, is pleasant though unnecessary. Sure, there are a handful of bits that wow – such as a haunting shot of a female corpse floating angelically in the flooded ballroom, or a tiny moment in which one of Rose’s paintings sinks beneath the chilly ocean water – yet the picture itself is already such an immersive experience that the added tech doesn’t really add to the equation. Unlike Avatar, which was only really satisfying on a visual level, and thus benefitted hugely from the extra dimension, Titanic’s 3D is a harmless icing on a cake that’s delicious enough on its own. 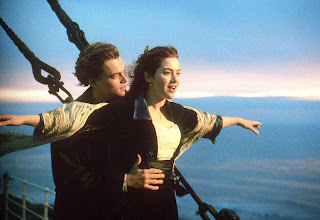 Still, regardless of the upgrade, Cameron’s opus is a picture that demands to be watched – and, yes, rewatched – on the best possible theatre screen available; where its countless iconic shots can be projected to appropriately larger-than-life, mythic proportions. Titanic is a work of visionary filmmaking, a rousing and poignant master class in how to use blockbuster techniques to reach into the hearts and imagination of the collective movie-going population. It’s poetic that the Ship of Dreams should inspire a work of cinema destined to continue sailing on throughout our own for a long time to come.
Posted by Cam Smith at 9:34 PM