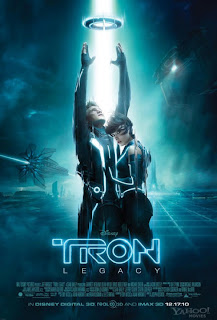 It will come as a surprise to precious few that Tron: Legacy director Joseph Kosinski has an extensive background in architecture. A mere glimpse at the expansive blackened cyber-city known as the Grid reveals an almost fanatical attention to detail. Thickly populated with intricately designed jagged towers, sleek, shiny platforms, glass-walled gladiator arenas and cavernous hallways, Kosinski and his team create an almost oppressive sense of machine-tooled exactitude. Even the smaller interiors are gorgeous. Take one step into Jeff Bridges’ character Kevin Flynn’s abode and you’ll bear witness to the most charmingly antiseptic futuristic Zen palace this side of the Matrix. And that’s just the sets, never mind the fantastic-looking light cycles, planes and 4-wheel runners. Forget Xzibit, if I ever need my room or ride pimped, I’m calling Kosinski and his crew of design dynamos. 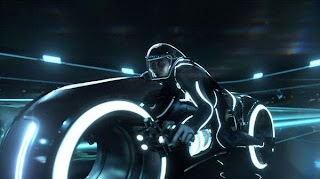 Indeed, as a honkin’ piece of big-with-a-capital-B blockbuster filmmaking, Tron: Legacy sure is mighty pretty to look at. So persuasive are the picture’s eye-popping visuals and glossy production work that we almost don’t notice that most of the inspiration seems to have stopped at the design stage. Like Avatar, this is another hyper-costly blast of musty storytelling gussied up in all the shiniest CG bows and ribbons. 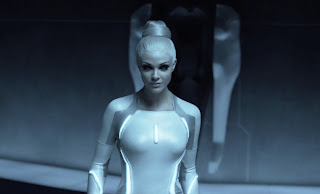 Which, of course, isn’t to imply that Tron: Legacy is devoid of fun. The first hour of the film plays like a truncated remake of the original 1982 cult hit, full of disc battles featuring daredevil choreography and a multi-layer light cycle race that amps up the velocity and danger factor. There are also nifty moments involving a quartet of simultaneous-stepping babe-bots in fetish gear and a virtual saloon overseen by a foaming-at-the-mouth Michael Sheen, playing an underground contact with all the subtlety of Willy Wonka on trucker speed.
Unfortunately. none of these highlights really play a prominent role in the by-the-numbers main storyline, which follows rich whiz-kid Sam Flynn (Garrett Hedlund), who has been on his own since his father vanished off the face of the earth in 1989. Now residing in 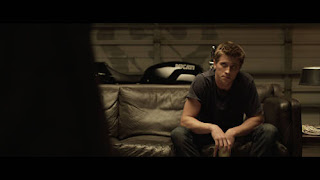 a storage container with his camera-savvy dog, Sam lives off his shares from ENCOM, the tech firm father Flynn once worked for, conducting vigilante-style annual sabotage pranks on the heartless company. He’s basically Bruce Wayne without the motivation to accomplish much beyond irritating boring old dudes (and a nerdified Cillian Murphy) in business suits.

Things take a turn for the technological, however, when Alan Bradley (Bruce Boxleitner), Flynn Sr.’s old Grid buddy, tells Sam that a beeper call has been made from Kevin’s dusty old office at Flynn’s Arcade. After all-too-easily finding the top secret subterranean lair (Where “Sweet Dreams” apparently plays on 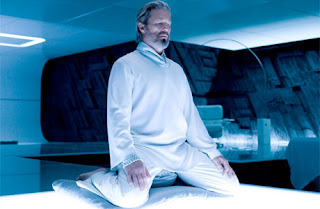 a never-ending loop), Sam is zapped via laser beam into the Grid, which is now ruled with a silicon fist by Clu, a Polar Express-ian young doppelganger of dear ol’ dad. Sentenced to partake in deadly games against warrior programs in futuristic motorcycle gear, Sam is rescued by wide-eyed ass-kicker Quorra (Olivia Wilde – officially replacing Speed Racer’s Christina Ricci as the fantasy girl for anime “enthusiasts” everywhere). She’s been sent by her creator – *drum roll* – Kevin Flynn, who decided eons ago that the best way to combat Clu was to just hang out, man. Now a grizzled cyber-hippie, Flynn Sr. is much sought by the sinister digital twin for his light disc, which contains every secret necessary for Grid – and perhaps world – domination.

While there’s nothing inherently wrong with wrapping high concept ideas around a tried-and-true formula, Tron: Legacy too often feels like it’s following a checklist. The story doesn’t flow so much as leap mechanically from one beat to the next. It’s stated early on that, to return home, Sam et al. must reach a portal on the other side of the Grid. Since the portal is apparently only open for a short span of time, why is there no sense of rising

tension as our heroes race bravely towards it? There’s a classic ticking clock set-up, but Kosinski and writers Edward Kitsis and Adam Horowitz fail to exploit it. Similarly, Sam has to break into Clu’s headquarters to retrieve a valuable item. To say that he meets very little opposition in his mission would be an understatement. Like too much of the film, it feels like the filmmakers are going through the motions, hitting the required genre tropes without comprehending why they’re crucial to building pace and excitement.

The slapdash screenwriting also extends to two of the film’s plot twists. There is a key character reveal, and a change of heart, which is dealt with so haphazardly that it’s positively baffling. Alth 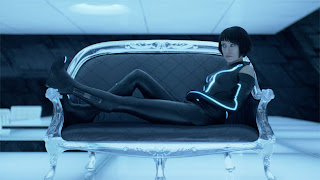 ough Tron fans steeped in the mythology of the property may be able to fill in the gaps, non-converts are likely to greet the intended crowd-pleasing moment with ambivalent shrugs. Also frustrating is Kosinski’s bungling of Kevin Flynn’s immense scientific breakthrough, which has led to the creation of new life-forms called ISOs. They’ll revolutionize science, religion and medicine, he declares. An intriguing concept, for sure, but no one involved with the script deemed it necessary to develop this idea much beyond a single line of dialogue.

These story deficiencies could have been softened had the actors been given three-dimensional characters or intelligent dialogue. Jeff Bridges is characteristically warm and charming - and drops a few amusing Lebowski-isms – but isn’t given a whole lot to do beyond act reluctant, provide exposition and share some emotion-fre 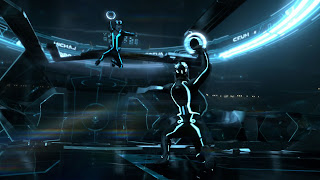 e father/son moments with Hedlund. His motion-captured performance as Clu is serviceable but lacks spark – the character is sunk by spotty animation and an utter absence of villainous charisma. Hedlund and Wilde manage to mine what they can from their clichéd roles, but ultimately fail to make much of an impact. They do, however, get the privilege of engaging in perhaps the most groan-inducing romantic exchange since George Lucas waxed poetic about sand.

By the time the Star Wars-inspired climax and dramatic denouement arrive, the picture feels like its spinning its wheels creatively – not a good sig

n for a supposed franchise re-starter. It is a mite frustrating to see hundreds of millions of dollars worth of dazzling art direction, costumes and computer programming working overtime to compensate for a screenplay that could have been easily (and inexpensively) retooled to provide a sturdy backbone for the impressive fireworks. Tron: Legacy is harmless and forgettable, a 1.0 blockbuster trying to operate in a 2.0 world.

P.S.: How to Train Your Dragon remains unbeaten as the best 3D presentation of 2010. Legacy's muted use of the technology is a true disappointment and something of an insult when taking into account the $4 ticket surcharge.
Posted by Cam Smith at 6:16 PM