Black Swan is such an overpowering cinematic experience that attempting to recall it after the fact is akin to trying to remember the specifics of a bravura on-stage performance. Rather than a coherent whole, we’re left with a series of fractured images and sensations of hypnotic splendour connected to one another by a relentless jolt of adrenalized awe. To simply call it a movie is missing the point; the joy of Darren Aronofsky’s twisted tribute to Swan Lake is that it is so engrossing and spontaneous that we feel as if we’re the opening night audience to a thrillingly dangerous new stage show. We don’t know what to expect next but the crackling energy in the room tells us it’s going to be unforgettable.

Occupying centre stage is Natalie Portman, playing the role of Nina Sayers, a gifted young ballerina whose fierce determination is counterbalanced by a nearly stifling innoc But wait, does Lily really exist or is she merely a figment of Nina’s increasingly fevered psyche? The answer remains elusive to the troubled dancer even after she wins the coveted job. As she be

gins her rigorous, unconventional training under the demanding Leroy, and her obsessive mother Erica (a scary Barbara Hershey) battles to maintain control over her life, Nina becomes more and more consumed - both physically and mentally - by Lily and her starmaking role. Soon, she's spiralling into the unknown and undergoing the early effects of a metamorphosis. What could be waiting for Nina on the other side of this transformation? And why won’t those strange scarlet scratches marking her back ever heal?

Aronofsky, an established master at balancing disparate story elements, has fashioned himself a gritty and unsettling homage to the paranoia-soaked horror classics of the late 60s a 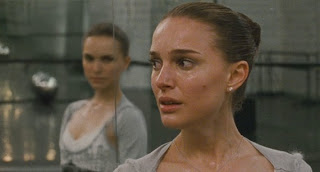 nd 70s. Although the presentation is intentionally grimier (cinematography Matthew Libatique’s intentionally unflattering, grainy camera work is the perfect mixture of ugliness and beauty), Black Swan could just as easily be a great lost film from Roman Polanski’s heyday. And, like its brilliant influences, this picture will consistently make you cringe and shift uneasily in your seat. No one mines involuntary shudders from scenes involving hangnails and fingernail trimming quite like Aronofsky.

Yet, despite its numerous cinematic references, Black Swan is wholly an Aronofsky film, continuing many of the themes and visual quirks of his previous efforts. The director adores doggedly determined protagonists who, like auteurs, delve headlong into their passions in order to create their ideal world. Similar to The Wrestler’s R 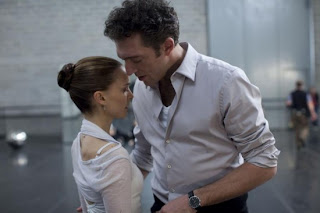 andy the Ram, Nina is driven by the unflagging desire to achieve glory on the theatrical stage. Aronofsky frequently shoots her just as he did Rourke’s character, from behind with a handheld camera, as she navigates her way throughout the ballet company’s rehearsal space and lower bowels. There’s an immersive fly on the wall quality to the picture that captures the day-to-day sweat and toil of the industry. Black Swan also boasts a strong element of body horror when depicting Nina's physical makeover. The spreading raw back scratches bear a distinct resemblance to the festering injection wounds from Requiem from a Dream – gradually deteriorating external injuries mirroring intensifying internal turmoil.

Aronofsky may be the true star of Black Swan but Natalie Portman runs a very close second. Gaunt and vulnerable, with a toned professional’s physique, the actress ventures into previously unexplored territory, playing a naive shrinking violet at the mercy of the dominant personalities around her. Not only utterly convincing as a career dancer, Portman commands the scre 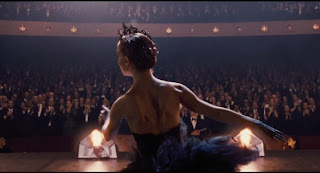 en every second she’s on-screen (Which is roughly 90% of the film). Certainly her visceral and nightmarish descents into madness are the most attention-grabbing, but it’s her charged interactions with the supporting cast that are the real showstoppers. There’s one scene, wherein Cassel teaches her character about seduction, which is as icky-sexy mesmerizing as Naomi Watt’s big audition in Mulholland Drive. It also bears mentioning that Portman and Hershey form the most destructively dysfunctional mother/daughter combo since Carrie. Although I’m not yet sure I’d call Portman’s work here the best performance by an actress this year, it’s undoubtedly the bravest.

If Black Swan has a shortcoming, it’s that Aronofsky’s lack of subtlety with the material has a tendency to dull the tragedy of Nina’s arc. Like ballet or theatre, the emotions are broad, sweeping and melodramatic – a necessity in those venues for communicating with attendees seated both near and far – but 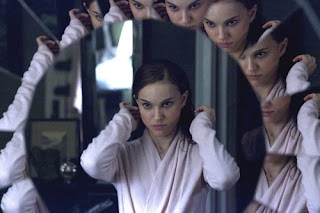 as a film it tends to hold us at a cool distance. We’re invested in Nina’s journey, but never quite locked in on a deeper personal level.

However, the picture is so confidently well-crafted, and ends on such a triumphant, spine-tingling high note, that it’s extremely easy to pardon the director for his slight shortfalls. It’s a miracle worth celebrating that a film as unabashedly weird and risky as Black Swan managed to come to fruition in the current filmmaking climate. Ultimately, Aronofksy’s latest looms large over the majority of 2010’s cinematic offerings and is worthy of not only your attendance but a standing ovation as well.