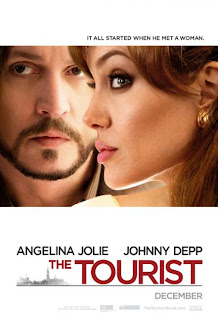 The Tourist is a light-hearted romantic spy romp with lead feet and a head full of rocks. That it stars two of Hollywood’s most sexy and beloved movie stars and is co-written and directed by Florian Henckel von Donnersmarck, the Oscar-winning director of 2006’s The Lives of Others (and the filmmaker with the best chance of one day having a Bond villain named after him), only compounds the frustrations of slogging through its paced-like-congealed-syrup 103-minite run-time. These people are more than capable of creating great audience-pleasing work! Why are they wasting their time and ours on a project that, more often than not, resembles a particularly tedious perfume commercial?

I imagine the chance to shoot in Venice was a significant part of the draw. The ancient canals and architecture of the world’s most romantic ci 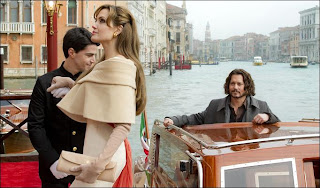 ty look gorgeous on-screen, and von Donnersmarck lingers seductively on each and every charming location. As a travelogue, The Tourist ain’t half-bad. It’s glossy and lovingly shot by cinematographer John Seale (The Talented Mr. Ripley, The English Patient) - a man who knows how to mine visual majesty from foreign locations. Pity, then, that nothing remotely interesting happens in front of the magnificent backdrops.

Inspired by bubbly Hitchcock thrillers such as To Catch a Thief and North by Northwest, and 60s-era star power-driven escapades like Stanley Donen’s Charade, The Tourist casts Angelina Jolie and Johnny Depp as romantic opposites who fi 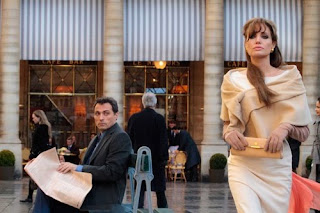 nd themselves on the run in Venice from generic movie gangsters and the law. Jolie’s Elise, a mystery woman being tailed (and constantly ogled) by an Interpol financial crimes team led by Paul Bettany, picks up unassuming math teacher Frank (Depp) on a train headed for Venice. She’s been instructed by her shadowy criminal lover to find a man bearing similar features to use as a decoy. However, after seductively luring the bumbling Frank to a luxurious hotel sparks begin to fly between the two. Or so we’re supposed to believe.

Certainly Depp and Jolie, individually, have undeniable chemistry with the camera, but together they feel awkward and cold; like two detached alien life-forms attempting to mimic love scenes from more successful movies. Fine, if the film was a globe-trotting remake of Invasion of the 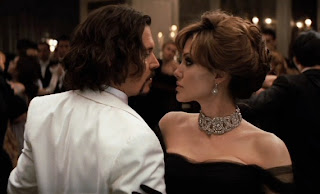 Body Snatchers, but deadly for a picture whose main selling point is the promise of cheerful romantic adventures. While Jolie relies on her come-hither stares, breathy delivery and bordering-on-X-rated body language, Depp plays his character like a stuffy, clumsy bore who seems like he would far rather peruse dusty old volumes than carry on a conversation. While we can buy her duping this poor sap, there’s nary a moment when their alleged mutual attraction translates to the audience. They also aren't done any favours by the hopeless dialogue which lacks any of the necessary zip or wit.

With the love story barely even operating on autopilot, there’s no strong central dramatic pulse to hold our attention during the film’s convoluted espionage hijinx. The classics which inspired this picture knew the crime thriller stuff was just a 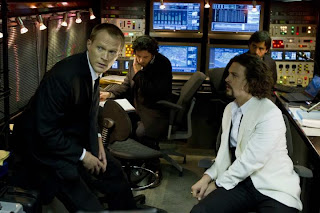 means of bringing together the attractive leads and rarely allowed the behind-the-scenes power players an opportunity to take centre stage. The fun came from watching the plucky protagonists weave together the ludicrously complex plot strands on their own. In The Tourist, we spend an exhausting amount of time with Paul Bettany’s team as they incompetently plan, plot and scheme. Bettany is a great actor, and, in a perfect world, would be playing the Depp part, but he’s saddled with a dull character whose only job is to explain the plot to the audience and tie up loose ends. The only time he seems to be having any fun is when he’s sparring with a lively Timothy Dalton, playing his hard-ass superior, in a couple all-too-short scenes.

The general sense of lethargy carries over to the film’s action set-pieces as well. There is a chase scene featuring two tied-together water crafts that loo 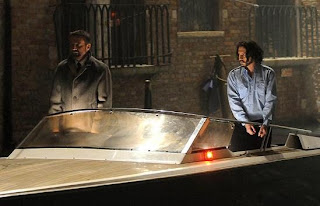 ks great, but lacks any thrills as it is – in keeping with the rest of the movie - arguably the slowest boat chase ever committed to film. The vehicles don’t actually appear to accelerate past 5 miles per hour. Slightly more energetic is a rooftop pursuit involving a bare-footed Depp and two gun-toting assailants, which cheerfully bends logic (Depp’s feet must be made of adamantium) but doesn’t feel like the showstopper it was intended to be. The character is such an aloof cipher that all emotion is drained from the scene. It’s almost impossible to care if he’s caught or not.

So little of the picture works that it’s kind of amazing. Even the shocking last minute twist is gratingly moronic, and actuall 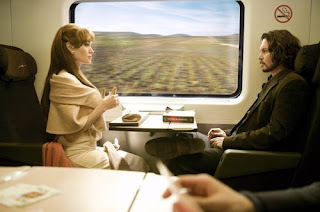 y worsens the experience of having sat through the whole sluggish affair. This is a film that needed to be faster, sharper and more attentive to the demands of its genre, or at least so hilariously awful that one could enjoy it on an ironic level. Instead, it’s flat and boring; a forgettable movie aimed at the masses with next to nothing to offer. The Tourist is in desperate need of a map and better directions.