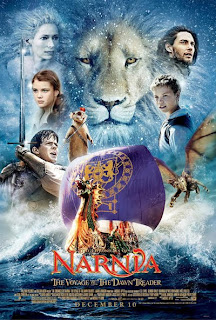 As I sat watching The Voyage of the Dawn Treader, the latest chapter in the spotty Chronicles of Narnia film franchise and the first produced by 20th Century Fox, I began to wonder why I felt no sense of emotional attachment to the lush, miraculous world on-screen. After all, with its emerald green hills, towering castles and cliff faces, dreamy, tranquil blue seas and colorful population of imaginative creatures, it should be the stuff of daydreams; a gorgeous, sprawling cinematic vista to escape for a few hours. Yet, instead everything feels flat and remote, an amalgamation of visual ideas from better fantasy films with more exciting tales to tell.

The fault certainly doesn’t lie in the source material – C.S. Lewis’ beloved universe has no shortage of sparkling invention – but rather the increasingly problematic disc 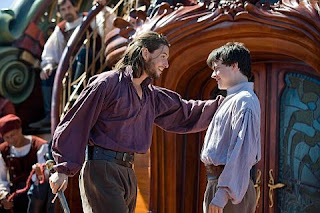 onnect between the episodic films. I’ve made two previous pilgrimages to Narnia, with the previous Walt Disney-produced films The Lion, the Witch and the Wardrobe in 2005 and Prince Caspian in 2008, and have yet to be given a cohesive layout of the land. Unlike The Lord of the Rings or the Harry Potter series, there’s been no attempt to establish a strong, unified cinematic Narnia. We jump haphazardly from new location to new location without a strong idea of where we’re going or how one place relates to another. Why is the brave King Caspian (Ben Barnes) sailing the open ocean at the beginning of Voyage of the Dawn Treader? Doesn’t he have a kingdom to run back, um, somewhere or other?

While I’m sure hardcore Narnia fans have no problem filling in the gaps, the rest of us are left confused and disoriented, treading water like Edmund and not-so-little-anymore Lucy Pevensie (Skandar Keynes and Georgie Henley) 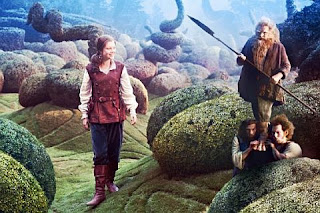 near the beginning of Dawn Treader. Pulled back into the magical land through a painting, the two plucky WWII-era teenage Brits are reunited with Caspian and swashbuckling mouse Reepicheep (now voiced by Simon Pegg, taking over from Eddie Izzard) and embark on a perilous ocean quest to collect seven enchanted swords which have the power to stop a sinister green mist that has been consuming Narnians. To complicate matters, the two siblings have accidentally brought along their snivelling, aptly named cousin Eustace Scrubb (Will Poulter), who has never met anyone (audience members included) he can't aggravate.

Unlike the pleasant first entry and the dire second, Dawn Treader seems more intent on pleasing the young folk in the crowd, maintaining a determined, brisk pace that focuse 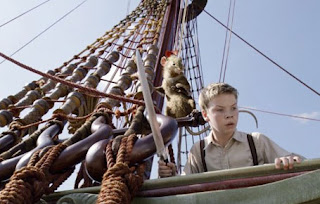 s on special effects and action and often leaves character and story development by the wayside. Each of our three Earthly protagonists are given a single trait to conquer (Lucy wants to be beautiful like her sister Susan (Anna Popplewell), Edmund lacks confidence in his masculinity and Eustace needs to stop being a selfish twerp) and overcome them all too easily. Barnes’ Caspian – who has dropped the annoying accent from the last film – is more or less just along for the ride, occasionally required to swing a sword or provide exposition.

Dawn Treader’s script, by returning series scribes Christopher Markus and Stephen McFeely, is chock-a-block full of allegedly important events and characters that are ultimately glossed over in the service of holding attention spans. There are no

less than three key figures who are introduced to great fanfare and then unceremoniously scuttled off-screen once they’ve delivered their key piece of dialogue. If you’re able to keep track of any names beyond those of the lead protagonists my (feathered) hat is off to you. Make no mistake, I’m not arguing in favor of the overindulgent bloat that dragged down Prince Caspian, but new director Michael Apted and editor Rick Shaine have gone too far in the opposite direction, stripping their movie of nuance and soul. This Narnia adventure is efficient and pretty, but not particularly engaging.

However, there are still a handful of wonders to behold. The introduction of a not-so-sinister fire-breathing dragon to the story manages, improbably, to inspire a few moments of gentle warmth while Aslan (voiced by Liam Neeson), the franchise’s trusty Jesus Lion, has a m 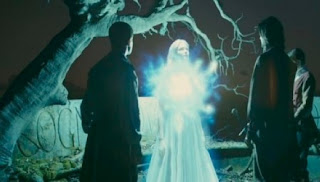 oving third act scene holding court on a gorgeous white sand island. There’s also a thrilling sea battle against a ravenous serpent beast and nice little bits featuring a living star (Laura Brent, a breathtaking spectre of otherworldly beauty), as well as transparent mermaids (who resemble more fully-formed relatives of the water tentacle from The Abyss) that splash and dive freely alongside the Dawn Treader. These dazzling moments operate as very welcome diversions in a feature film that too often feels sadly light on amazement. 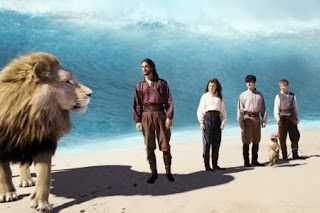 Despite being three films in, this series just isn’t hitting the crucial audience-pleasing notes required to warrant its continued existence. Although The Voyage of the Dawn Treader is perfectly inoffensive – and will provide suitably harmless entertainment for kids with free time over the holidays – it lacks the sweep, majesty and overpowering sense of awe necessary to reach the hearts and imagination of its audience. During the film’s closing it’s implied the time has come for Lucy and Edmund to leave Narnia behind and move on with their lives. The franchise’s filmmakers should probably consider following suit.
2.5 out of 5
Posted by Cam Smith at 12:15 AM