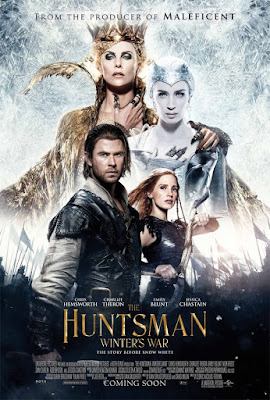 In a 21st Century Unnecessary Sequels DVD box set, The Huntsman: Winter’s War would fit comfortably just after Basic Instinct 2: Risk Addiction and Evan Almighty. Sure, it’s nowhere near as fundamentally unwatchable as those, um, films, however it is equally disposable, shoehorning only the most slight of additions into the simple mythology established by 2012’s Snow White and the Huntsman. This movie exists solely because that flick made okay money. So what if no one even really liked it! The same business strategy worked like gangbusters for Lara Croft Tomb Raider: The Cradle of Life, right?! Oh…

Honestly, who out there was left deeply yearning to learn more about Chris Hemsworth’s statuesque Thor-lite by the end of that movie? Yes, the charismatic actor was one of the very scarce bright spots in that dreary and dull modern fairy tale revival. On paper, though, Eric the Huntsman is a thinly conceived figure, short on personality and recognizable characteristics. There, he at least served a crucial plot function in escorting Snow White to her destiny. Whereas here, serving as (arguably) the lead, he’s completely upstaged by eminently magnetic returning villainess Charlize Theron and great franchise newcomers Emily Blunt and Jessica Chastain. When your central figure is a swaggering blank, it doesn’t exactly inspire much investment. Just sayin’. 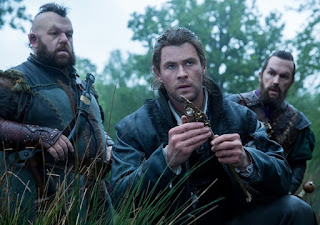 Acting as both prequel and follow-up to the now foggy events of its predecessor, The Huntsman: Winter’s War (spoiler: there is no winter’s war) opens with Theron’s social climbing sociopath Ravenna assuming command of her kingdom through magic and murder. Watching from the sidelines is her fair sister Elsa Freya (Blunt), a naïve optimist carrying the child of a married man, who is abruptly driven down a similar dark path after fate turns cruelly against her. Now wielding formidable ice powers, she sets her sights on becoming a conquering warlord (“If she could not raise a child, she would raise an army,” slumming narrator Liam Neeson gravely tells us), transforming captive orphans into fearsome cannon fodder. Chief among Freya’s recruits are Eric (Hemsworth) and Merida Sara (Chastain), two top-ranking combatants whose forbidden romance draws the wrathful ire of their emotionally scarred Queen.

Flash forward seven years. Eric, now an honorable servant to Snow White (Kristen Stewart’s mute body double), is assigned to complete a dangerous recovery mission of Ravenna’s enchanted mirror, which threatens to spread doom across the land. Teaming with a duo of wise-cracking dwarves (Nick
Frost and Rob Brydon, battling valiantly with comic fool’s gold), his truncated Lord of the Rings-esque quest soon brings him into conflict with his chilly former ruler, as well as his long lost beloved. 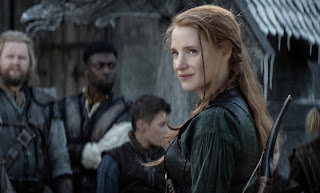 As hollow and pointless an exercise as The Huntsman is it must be stated for the record that it's actually quite superior to the last film. Thankfully tossing off the smothering cloak of self-seriousness, Winter’s War is a much brighter and campier affair that moves at a decent clip and spends little time wallowing in its characters’ miseries. It’s the sort of nonsense B-movie fantasy epic one might catch on Netflix one boring night and think “that was actually okay!” before totally forgetting about it.

It’s utterly miraculous that The Huntsman not only managed to draw such an astonishing cast, but that said cast didn’t just phone their efforts in. After all, it would be hard to blame them with this junky and derivative material. Theron and Blunt are having an absolute ball, vamping it up with wild abandon. Although they unfortunately never quite approach Faye-Dunaway-in-Supergirl levels of hammy thespianism, they still go well above and beyond the call of duty. Likewise, Chastain makes for one darn persuasive action heroine. Clad in black leather and speaking in a Scottish brogue, the talented actress’s ass-kicking turn here inspires serious anticipation for a more deserving blockbuster star vehicle. As for Hemsworth, he’s appropriately Hemsworthian; effortlessly charming, good-humored and likeable. He swings Eric’s hand axes as ably as Thor’s mighty hammer, if not as memorably. 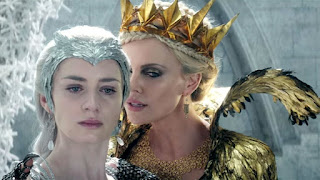 Since this is a movie made in 2016, it of course ends with a teaser for a dubious next chapter. This choice is especially egregious given we’ve just witnessed a clear wrap up of all the remaining story threads few really cared to see wrapped up in the first place. As a fantasy entry, The Huntsman: Winter’s War is inoffensive and cornball silly, coasting by on its fun performances and ultra-low expectations. By the time the credits roll, though, it should be abundantly clear to all but the most faithful that the studio really needs to stick an ax in this franchise, because it’s definitely done.