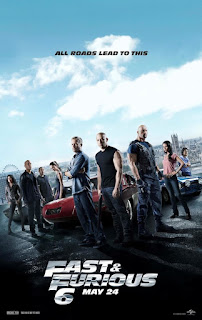 The Fast and the Furious franchise is the rarest of cinematic beasts: a series that’s miraculously improving beyond the halfway marker to double-digit sequels. 2011’s Fast Five was easily the best entry – a propulsive party movie packed with incredible stunts and larger than life performances – and handily replenished the property’s sputtering fuel tanks. This latest installment, Fast & Furious 6 (or, according to credits, Furious 6) doesn’t quite match the inspired craziness of its predecessor, though it’s still a gloriously dopey spectacle that won’t disappoint the die hards and may provoke an appreciative “WHOA!” or two. 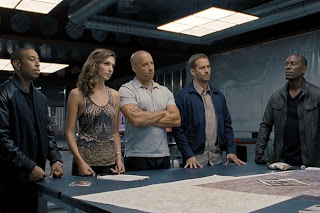 Picking up shortly after the last picture, Dominic Toretto (Diesel), Brian O’Conner (Paul Walker) et al. are filthy rich and living it up in Spain, wanted fugitives in their homeland US of A. Enter hulking Interpol agent Hobbs (Dwayne Johnson); seems an international criminal named Shaw (Luke Evans) is building a super-weapon capable of knocking out military electronics (or something like that – it’s vaguely defined), and he’s employing Dom’s lost love Letty (Michelle Rodriguez), thought dead since 2009’s Fast & Furious. Offered full pardons for their voluminous past misdeeds, the gang heads to London to chase down the ruthless criminal and return their former friend to the fold.

As has classically been the case, the screenplay - by regular series scribe Chris Morgan – is mostly a nonsensical clothesline for huge action sequences and barn-door-broad humour (there’s a running gag about comic relief Tyrese Gibson’s big forehead that dies on-screen every time). However, under the stylish eye of returning helmer Justin Lin, Furious 6 hums with colorful, goofy energy and big-time rousing high speed car-nage. Although he never tops his safe-swinging Fast Five finale, Lin stages two extended set-pieces – one involving a tank, the other a huge cargo plane – that reach apex after apex, constantly offering new absurd reasons to applaud. And, while the middle section of the movie meanders a bit, the helmer does a fantastic job juggling his ensemble cast (take note Star Trek into Darkness) and making their interactions lively and light. 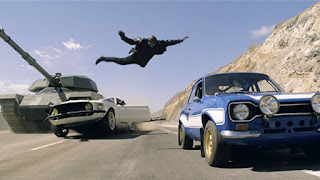 These are not actor’s films, yet the amiable cast is invaluable in investing us in the preposterousness. Diesel’s moody outlaw philosophizing, Johnson’s sweaty intensity and Walker’s, uh, Walkerness ground Furious 6, while endearing supporting characters like Sung Kang’s Han, Ludacris’s Tej and Gibson’s doltish Roman inject much-appreciated charisma. Rodriguez has her tough girl act down cold, and shares a killer fight scene with Haywire’s Gina Carano (a tough, sexy physical presence who looks like an awkward contest winner in dialogue scenes).

Chances are, this far into the series, you know whether this flick is for you or not. Fair enough. Furious 6 is unlikely to change opinions of the franchise, but it offers the requisite empty-calorie thrills and macho camp you’ve come to expect. And, as far as summer blockbusters go, this one guns its engines with confidence and a big dumb grin.

*Originally published at BeatRoute Magazine.
Posted by Cam Smith at 1:29 AM