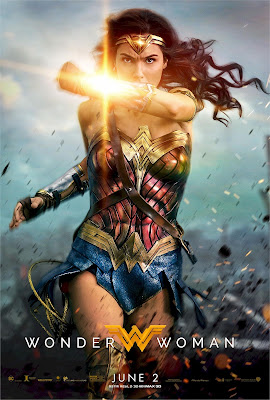 The last 15-plus years must have felt like a cruel joke for die-hard Wonder Woman fans. Since X-Men and Spider-Man launched the superhero craze, a steady parade of male icons have headlined their own showcase vehicles as comic-dom’s definitive heroine sat dormant, ignored in favor of low wattage players like Ant-Man, Hellboy and Jonah Hex. Victim to the dumb belief audiences weren’t interested in female-fronted adaptations – thanks to reasonable public indifference to low-rent crapfests Catwoman and Elektra - the Amazonian crusader finally arrived last year with a brief-but-buzzworthy turn in the dire Batman v Superman: Dawn of Justice. Given the DC Extended Universe’s lousy track record though, the potential for a good solo movie seemed highly dubious. 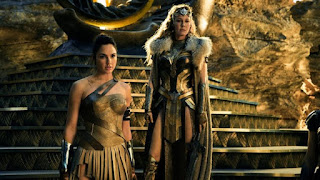 Let it be said firstly that Diana Prince’s first cinematic spotlight adventure, directed by celebrated Monster helmer Patty Jenkins, winningly honors the icon herself, who first exploded from the pages of 1941’s All Star Comics #8, even if the picture as a whole doesn’t deliver the desired punch. It’s a frustrating effort that gets so much right it becomes extra aggravating when it makes the same unfortunate stumbles - albeit to a less crippling degree - DC Films’ previous efforts have made. For a character brimming with confidence and bold individuality, why, oh why, couldn’t her movie follow suit?

Similar to 2013’s Man of Steel, Wonder Woman also dazzles from the get-go with an astonishingly well-crafted opening section depicting our lead’s origins in a grand far away land. Instead of a Kryptonian spacey prog-rock utopia, in this case it’s the lush and beautiful mystical island of Themyscira, created and hidden from mankind by Zeus, inhabited by Queen Hippolyta (Connie Nielsen) and her legion of fierce Amazonians. Growing up in the protective shadow of her cautious mother, Princess Diana (Gal Gadot, with younger versions played by Lilly Aspell and Emily Carey) yearns to pursue the warrior heritage she sees embodied by her fearsome aunt Antiope (Robin Wright). And, after at last receiving permission, she trains grueling year after year in order to earn her rightful place alongside her fellow protectors. 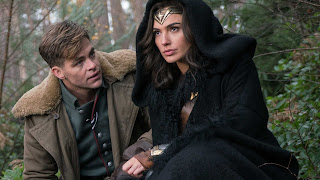 As fate would have it, the island’s serene bubble is soon burst when a plane carrying WWI spy Steve Trevor (Chris Pine) inadvertently tears through its portal, luring German troops into paradise. Sympathetic to her American visitor’s haunted accounts of mankind’s suffering, Diana pledges to accompany him to home wherein she will vanquish the banished god of war Ares, who she holds responsible for the brutal conflict. Revolted by the limitations placed on women in early 20th century London society, she accompanies her new ally and his ragtag team into the grim, muddy hell of battle. There, she quickly begins providing hope for the hopeless, even while nefarious fiends Ludendorff (Danny Huston) and Dr. Maru (Elena Anaya) plot to thwart the impending ceasefire with weapons of unimaginably ghastly power.

Whereas MoS, BvS and Suicide Squad inexplicably went out of their way to completely bungle the company’s most beloved heroes and villains, Wonder Woman warrants major kudos for being the first of the studio’s efforts to completely understand the psychology, iconography and moral compass of its main character. No doubt helmer Jenkins - working with a screenplay by Allan Heinberg, a former writer/producer on The O.C., Grey’s Anatomy and Scandal - played a key role in this achievement given her history of crafting grounded character studies. Although Diana faces similar challenges in translation as many of her fellow brand-mates, being essentially an invincible God lacking the messy and relatable quirks of Marvel’s creations, the film finds compelling methods of opening up her through her commitment to decency. While she can undeniably kick ass with the very best of them, without ever falling victim to action figure tedium, it’s the unwavering focus on her deep compassion, unflagging optimism and refusal to back down that draws us in. In the otherwise weirdly aggressive DCEU she’s the first truly inspirational protagonist to emerge. 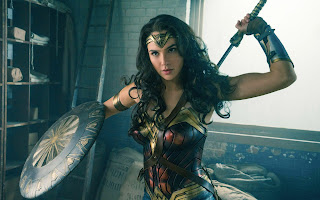 All involved were extremely fortunate to find Wonder Woman’s ideal conduit in Gal Gadot, one of those perfect-in-every-way casting coups akin to Thor’s Chris Hemsworth or original Superman Christopher Reeve. Exuding benevolence, and boasting impressive physicality, solid comedic timing and an ability to sell both the crowd-pleasing and quietly intimate moments, the actress can frankly have the role as long as she wants it. Her Diana plays nicely off of established charisma-bomb Pine – whose Trevor is nicely layered and hyper-capable – and succeeds in finding the emotional truth in scenes that occasionally veer into cornball territory. Nailing ace material is impressive; however her ability to make even the script’s clumsier bits work on a character level is an even more profound testament to her skills.

Were this an auteur-driven superhero epic like those produced before the Marvel Studios model was born, such as Nolan’s Bat-films or Raimi’s Spider-Mans, Wonder Woman might have been as incredible as its star. Jenkins’ fascination with exploring the deeper themes of the character is commendable, and a sad rarity in franchise moviemaking. Alas, she must also serve the grand DCEU game plan, which means there’s only so much room for outside-the-box thinking. And part of the problem is the unnecessarily self-serious tone established by the preceding franchise entries, which runs awkwardly headlong into the picture’s high-spirited attitude and beaming hopefulness. 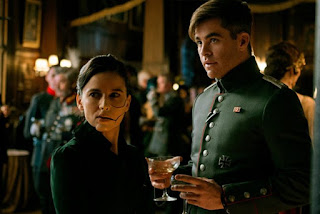 There’s a lightness of touch missing to these films that holds them back from ever truly soaring. You can feel it gradually overtake this movie bit by bit until the whole endeavor capsizes into a messy and tedious third act display of monologuing villain nonsense, ugly CG bedlam (after a thrilling early beach skirmish the action noticeably degrades into spastic choppiness throughout the runtime) and Captain America: First Avenger-ish payoffs. It’s curious why the studio is so determined to suck the fun and joy out of their work, when those elements have been so crucial in winning over generations of readers.


It really doesn’t help that Wonder Woman offers up some of the most uninspired antagonists in recent memory. Simply put, they bring next to nothing, and play an almost entirely insignificant role in Diana’s story, which seems like the sort of thing that should have been remedied before shooting. At least Dr. Maru strikes an impressive visual, with her deformed face covered by a makeshift cosmetic appliance echoing Boardwalk Empire’s Richard Harrow, yet she’s the epitome of disposable outside of a solid scene with Pine. As for the big bad, let’s just say he’s somehow less impressive than BvS’s big lame-o Doomsday, which is a not an admirable feat. 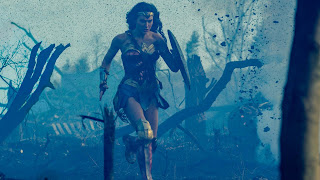 Because of the obvious passion and fantastic contributions from Jenkins, Gadot and Pine you can’t help but root for the movie to work (especially when our heroine’s killer theme music kicks in), even in spite of its forgettable (non-Themyscira) supporting characters, hacky bookends and often sagging energy. Perhaps the greatest takeaway from Wonder Woman is witnessing her worthy ascension to the top of the DCEU hero pack, which at least leaves us encouraged that next time around Diana may get the triumphant picture she truly deserves. Because there’s little question the silver screen needs her right now.

I am a big big DC fan. And I have always loved the character of Wonder Woman. It's very women empowering. I have heard legit good reviews of the movie and I'm going to see it in a day or two.

I like it a lot. I can feel that you paid much attention for those articles, as all of them make sense and are very useful Tik Tok

Excellent .. Amazing .. I’ll bookmark your blog and take the feeds also…I’m happy to find so many useful info here in the post, we need work out more techniques in this regard, thanks for sharing. free album download websites