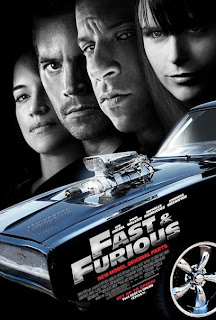 Holy hand-grenades! Fast & Furious kicks off with an exuberant bang courtesy of an action sequence that would be perfectly at home opening the next James Bond adventure. Set on a dusty, windy Portuguese mountain road, a team of daring crooks, led by Dominic Toretto (Vin Diesel) and his tough-cookie girlfriend Letty (Michelle Rodriguez), attempt to liberate a considerable load of liquid gold from a gargantuan gas-hauling semi-truck. As the unwieldy behemoth swerves aggressively from left to right, and Rodriguez and a female accomplice hang on by the skin of their finger nails while Diesel and co. spin their jacked-up roadsters around like demonic dervishes, we thrill at witnessing a truly effective and brilliant combination of gutsy stunt-work, expert driving and dazzling practical effects combined into a Molotov cocktail of high-octane ecstasy.

Based purely on the stimulating success of this automobilia-erotica foreplay, one would be more than forgiven for expecting director Justin Lin 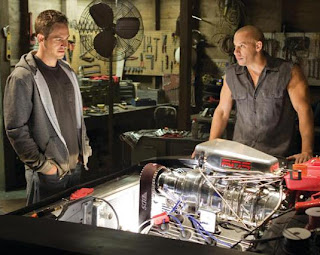 ’s stupidly titled film, the fourth in the popular homo-erotic Fast and the Furious franchise - famed for their multiple scenes of shirtless, sweaty men locking eyes and stroking chrome - to provide a heady collection of candy-glazed car-smacking and entertaining gee-whiz discourse. Unfortunately though, after blowing his movie’s wad prematurely, the remainder of Lin’s limp work shows very little grind or thrust.

Arguably set after the epic events of the awesomely campy 2 Fast 2 Furious, and preceding the coma-inducing Tokyo Drift, this entry picks up with Diesel’s outlaw Toretto on the run and seeking revenge. 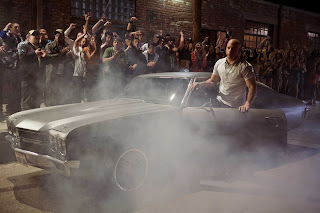 Following the off-screen murder of a close colleague (which is later recreated in full CSI glory), and hunted by the authorities, the lumbering, bald gearhead returns to his American homeland, intend on shutting down the shadowy heroin operations of the mysterious crime-lord Arturo Braga (played by ???). His investigation brings him into uneasy contact with his former “bro”, FBI Agent Brian O’Connor (Paul Walker). Fortunately for the two, Mr. Braga is a street-racing enthusiast – a shock, I know – and soon the two are vying to be a part of his merry band of gear-poppin’ drug transporters.

As Toretto and O’Connor quickly find themselves immersed in the devious goings-ons of Mr. Braga, old wounds and tensions speedily find them 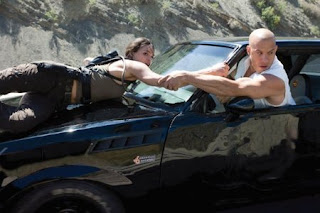 selves rising to the surface. While Brian attempts to find a balance between his role within the government bureaucracy and his allegiance to the Toretto clan, including ex-lover Mia (Jordana Brewster), Dominic must battle his own inner demons and seek an end to his high-flying criminal ways. When shit starts to hit the fan, and the identity of Braga is brought to light, the duelling car junkies are forced with a decision: to play by the rules or to shift into maximum overdrive and attack the foe head-on... Fast and furiously!

Now, before going any further, I’d like to take a little moment and examine Mr. Braga’s criminal organization. Fronted by the deceptively friendly Campos (John Ortiz), one would assume that, due to the elusive nature of the group’s figure-head and the FBI’s inability to bust them, they would be intent on remaining in the shadows, correct? So why then 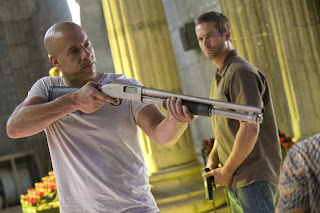 would they hold initiations for drivers by conducting reckless street-races in heavily populated downtown Los Angeles? Wouldn’t the immense amount of property damage and civilian casualties tip the authorities off? And again, where is the logic in capping your drivers after a single mission? So you can have more deadly automobile contests and rack up more damage in major urban centres? Seems like a pretty questionable tactic for staying secretive... But then again, the FBI can’t seem to find Diesel’s Torreto the entire film, and he’s just hanging out at his sister’s place – which is under strict surveillance!!! Gadzooks!

I know, I know, I shouldn’t concern myself with the plot. Fast and the Furious flicks aren’t about intricate storytelling but rather “sweet” rides and “off-the-hook” car chases. So why has Justin Lin gone to such effort to rob viewers of the expected spectacle? The big L.A. driving competition is filmed in pitch black, choppily edited an 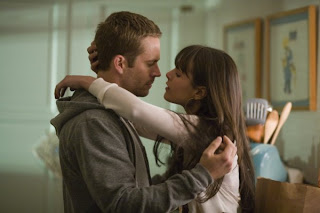 d shot through a particularly murky lens. Likewise, the climactic pursuit, set in a cramped, under-lit mining tunnel which separates Mexico and California, is too dusty and poorly CG-altered to make any sense or deliver any excitement. For the life of me, I was completely unable to make out the details of Toretto’s miraculous escape and survival.

So, the car stuff sucks, but what works? Well, Diesel, when not moping, is still a forceful and engaging presence and his work here helps erase the lingering ache of dreck like Babylon A.D. or The Pacifier. Similarly, Walker has actually gr 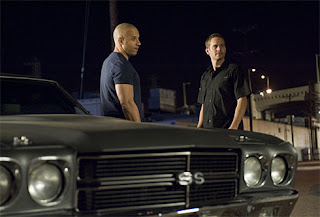 own into his role, which is refreshing after the character’s previous incarnations as a bleach-blonde haired doofus, calling everyone ‘brah’, and appearing like a home-schooled Eminem-wannabe playing dress-up. He’s better now, I swear, and has a good physicality in a cool early foot-chase and in a nice bit pounding a co-worker to a pulp.

The women fair far worse, obviously. This IS a series built on mutual man-love and sensual displays of automotive arousal after all. Michelle Rodriguez is a lot of fun in her truncated returning role and the film would have been better served by including more of her. Less Jordana Brewster would have been a big plus though, as her emotional histrionics are painful to endure, and a late-game 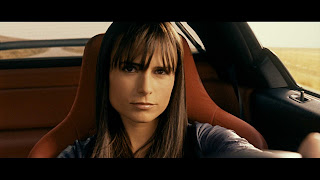 love scene between her and Walker is baffling in its suddenness. Gal Gadot as, um... Gisele Harabo (thanks IMDB!), a bad girl with a heart-of-gold, is a complete waste of time, not even named within the film and used only for cheap ass and tit shots as well as a whole lotta groan-inducing romantic come-ons.

You have to admire the initiative of the producers who have milked this series of Point Break rip-offs for everything they’re worth and are now guaranteed a chance for a fifth go-around. Fast & Furious, to put it m

ildly, doesn’t live up to its title but will probably modestly entertain the masses until the summer’s heavy-hitters stampede into theatres next month. With that said, by failing to meet the standard for sharply rendered automotive-awesomeness set by the previous films, apathetic movie-goers just may not be rushing quite so fast to the next Furious.