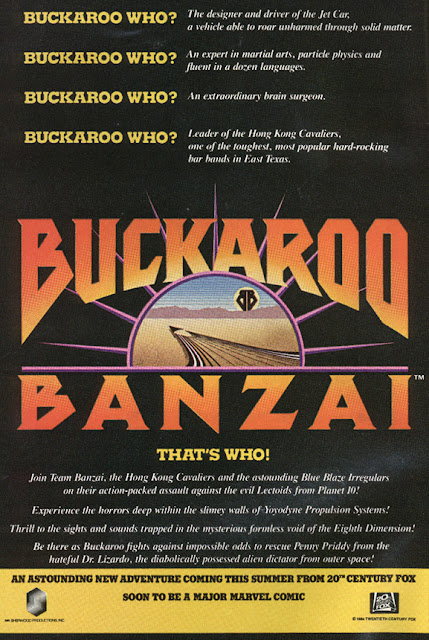 Pity the poor 20th Century Fox marketing staff members that were forced to brainstorm a coherent advertising campaign for this 1984 satirical sci-fi cult fave. I mean, having endured The Adventures of Buckaroo Banzai Across the 8th Dimension, I know very well that it's the most foolish of fool's errands to try to sum it up in a sentence or two. A doctoral thesis? Maybe. But a single tag-line? Ha! Good luck, bunky.

That said, a good argument could be made that the approximately 73 lines of context-free description they jotted across this teaser poster are actually more confounding than the movie itself. I mean, who did the team think this poster would appeal to? Who did they think would take the time to stop and spend half an hour reading it in the theatre lobby? It's head-spinning to even try to visualize what it's selling (Yoyodyne Propulsion Systems? Penny Priddy? Za?!), and the lone image is just abstract enough to be utterly meaningless to anyone who hasn't seen the movie.

I'm assuming Fox was hoping to appeal to the geek audience (hence the prominent "Major Marvel Comic" plug, although I'm fairly certain Buckaroo's funny book adventure sales were anything but major), but was that really a smart market to target? Even in this era, where Comic-Cons rule the land and superheroes storm the multiplex, geek dollars only carry so much weight. Just ask the filmmakers behind Scott Pilgrim and Kick-Ass. Solely targeting them in 1984? Insane. Perhaps that's why Buckaroo only Banzai-ed itself to a 6-million-dollar domestic gross. Ouch.

To be fair, the studio did ultimately release a more general audience-friendly theatrical poster, but when it comes to motion picture branding, first impressions are everything. If you don't burst confidently out of the gate, the public catches on lickety split and shifts their attention elsewhere. Call it the Green Lantern effect, if you will. Back on August 10, 1984, you had three big new movies to choose from: the kids and spies adventure Cloak & Dagger, the Commie-busting teen actioner Red Dawn and this bewildering unknown quantity. Which one would you have chosen to skip? Audiences at the time arrived at the same conclusion.

Which isn't of course to imply that Buckaroo Banzai is a terrible movie (although it's pretty far from a good one), just that when it comes to successfully selling a movie a clear hook makes all the difference. The no doubt capable creators of this one-sheet never figured their picture's out. Instead, they crafted a hilarious mess of convoluted nonsense and off-puttingly weird imagery.