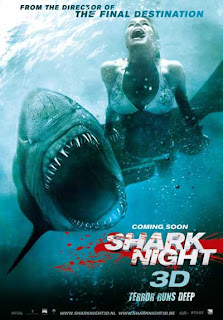 As far as aquatic monster thrillers go, Shark Night 3D doesn’t bring a whole lot to the table. It’s mostly a reheated chum bucket of standard genre tropes served up as late summer celluloid filler for the undiscerning. However, it does make one valuable contribution worthy of enthusiastic notice: it finally offers the Cookiecutter shark its moment to bask in the spotlight.
Long ignored by the world of exploitative B-movies, the Cookiecutter shark is an ugly little fellow with a truly unusual method of attaining food. The creature suctions itself onto the bodies of prey with its mouth and then spins in circles, using dozens of razor-sharp triangular teeth to saw loose chunks of flesh. Round, cookie-shaped chunks of flesh. Awesome, huh?! And, if that isn’t impressive enough, their bioluminescent bodies – which lure unfortunate victims into their gory, ninja-like sneak attacks - earned them the genus name Isistius, after Isis, the Egyptian goddess of light. That’s a pretty badass distinction for a carnivore that measures a mere 50 centimetres.
Ol’ Cookiecutter doesn’t get much time to shine in Shark Night 3D, but it makes every single horrible second count. Watching a school of the diminutive swimming night-terrors turn a screaming college student into a bloody human jigsaw puzzle, I couldn’t help but let out a cackle of twisted appreciation. Frankly, this flick badly needed more moments like it! 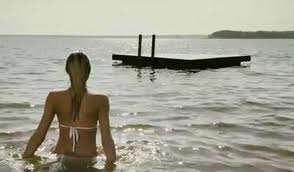 Note: If you’ve ever seen a by-the-numbers horror movie before, you’ll be able to scan the above list and easily determine who the first two attack victims are.

On the way to the lake, the criminally attractive friends run afoul of Sara’s ex-boyfriend Dennis (Chris Carmack) and his loathsome pal Red (Joshua Leonard). They’re a pair of racist hicks with a serious hatred for higher education, who object to Sara attempting to escape her small town roots. However, after a couple “boating accidents,” it becomes painfully clear the peaceful lake is thriving with several species of man-eating shark. Thus, in order to avoid becoming dinner, the opposing parties, along with jovial local lawman Sabin (Donal Logue), are forced to quit their squabblin’ and join forces to flee the Gulf’s toothy new residents. 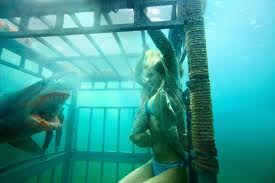 While Shark Night 3D is being marketed as a straight-forward shark thriller, the script by Will Hayes and Jesse Studenberg is actually more of a sub-genre mash-up, blending together elements from several different horror movie breeds (which I dare not spoil in fear of ruining major plot twists). Unfortunately, the three primary sub-genres depend on a certain level of creative depravity and go-for-broke lunacy in order to succeed, and Shark Night 3D’s blood-spattered potential is utterly neutered by its PG-13 rating. Outside of the creepy Cookiecutter sequence, none of the kills have any real impact. Oh, there’s plenty of red in the water, but they’re abrupt and frustratingly brief, with precious little gore or flailing-limbed hysteria. Even the fairly ingenious third act revelation explaining how the sharks wound up in the lake is hopelessly dulled by the filmmakers being unable to milk it for everything its worth.
The film’s harmless, bland vibe can also largely be laid at the feet of helmer David R. Ellis, a man who has become infamous for failing to live up to expectations. After grabbing the attention of genre fans with the outrageously over-the-top Final Destination 2 and the fun, if inconsequential, Cellular, he stiffed on two sure-fire camp-tastic concepts: the much-hyped Snakes on a Plane and 2009’s terrible The Final Destination 3D. Now, against Herculean odds, he's managed to make sharks boring. Despite featuring almost a half-dozen varieties of the fearsome fishies, none of them have even the slightest wisps of on-screen personality. They’re under-utilized, cheesy-looking blurs of CG that just dash in and out of frame. At the beginning of the movie, Ellis even lazily attempts to recreate the iconic opening of Jaws – for what has to be the millionth time – and it is borderline embarrassing. Obviously, his options have been limited by the MPAA, but if you can’t find cool new ways of shooting an attack sequence, you have no business wading into the water. 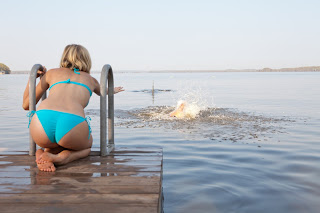 He also makes the critical error of attempting to pad the opening hour with pointless zany montages and diversions in an effort to stretch the picture to feature-length. There's a sluggishly-paced boat chase that seems to drag on for eternity, and a wakeboarding segment that's about as exciting as sitting on a dock and watching others enjoy themselves through binoculars. And, as if lulling the audience into tedium isn't unforgivable enough, neither of these listless timewasters have any effect on the story or characters.
The cast is largely forgettable shark bait, even by generic horror flick standards. Donal Logue goofs off amiably in a poorly defined stock role, and Sinqua Walls is strangely fascinating due to the fact his football player makes a series of decisions so amazingly stupid that they defy rational human thought. Only Chris Carmack, as the heroine’s sinister former flame, makes a lasting impact. He’s effortlessly charismatic, and projects genuine menace. It’d be great to see the actor cast in a smarter and more daring film that allowed him to really get nuts.

Given the state of the economy and current ticket prices, there’s no good reason you should venture to the multiplex to experience Shark Attack 3D. There’s not much here you can’t see in a dozen crappy DTV killer shark movies, and the 3D is virtually non-existent. Coming almost exactly one year after Alexandre Aja’s giddy Piranha 3D – which rung every last drop of schlocky perversion and winking naughtiness from its dopey premise – Ellis’ movie feels tired, trivial and antiquated. After all, if there’s no frenzy to go along with feeding, what's the point?!
2 out of 5
Posted by Cam Smith at 2:42 AM