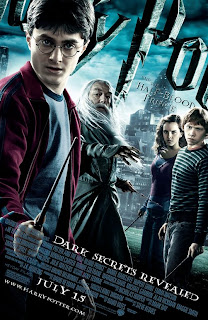 Any Harry Potter film that opens with a flash strobe-popping nod to Scorsese’s Raging Bull and closes with a poetic homage to The Empire Strikes Back is all-right in my book, and Harry Potter and the Half-Blood Prince is the best of the series, a work of ornately dazzling fantasy storytelling. After the clunkily competent Order of the Phoenix, which was marred by a dull and poorly staged final act, returning director David Yates has delivered a revelatory work: a dark, Gothic-tinged expedition into a world of omnipresent evil and apprehensive uncertainty, kept alight only by the purest of brave hearts. Hogwarts has never felt more empty and forlorn, with its towering spires reaching achingly towards the glumly overcast sky, but, surprisingly, there are still an abundance of joys and wonders waiting to be discovered within its earthy stone walls, vast corridors and curiously decorated, snug rooms.

The adventure which fuels Half-Blood Prince begins with a shocking act of real-world violence, as a trio of wraithlike Death Eaters, operating under the hateful orders 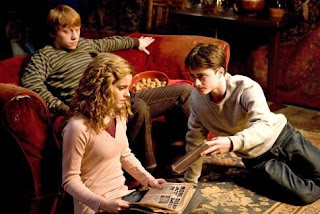 of Lord Voldemort, wreak calamitous havoc upon the Muggle population of London. Spurred into action, Professor Albus Dumbledore (Michael Gambon) recruits Harry Potter (Daniel Radcliffe) for an investigation into both the present-day goings-ons of the loathsome Draco Malfroy (Tom Felton), and the crucial historical events which drove the young, troubled Tom Riddle (played at differing ages by Hero Fiennes-Tiffin and Frank Dillane) to adopt the malevolent mantle of He-Who-Must-Not-Be-Named. Enlisting the oft-soused Professor Horace Slughorn, a visibly anguished former Hogwarts potions professor with past connections to both Voldemort and Harry’s parents, as a potential source of essential information, the duo set out to discern the exact nature of the wicked wizard’s world-shattering intentions.
But of course even the most imperative of missions can become complicated by the emotional tilt-a-whirl of teenage romance. Whi 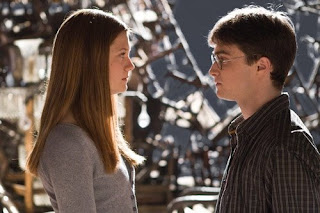 le Harry’s best-pals Ron Weasley (Rupert Grint) and Hermione Granger (Emma Watson) become embroiled in a frustrated love triangle with the hormonally-loco Lavender Brown (amusing newcomer Jessie Cave), the Chosen One himself begins to be irresistibly drawn to the all-grown-up-and-suddenly-lookin’-real-good Ginny Weasley (Bonnie Wright). As these mini-dramas swirl out of control, and Voldemort’s forces, led by the batty Bellatrix Lestrange (a sexy/scary Helena Bonham Carter), wreak increasingly unspeakable havoc, young Harry is faced with having to win a seemingly unwinnable battle – with the precarious fate of the universe at risk.
The entire tumultuous journey is communicated gorgeously by Yates and director of photography Bruno Delbonnel, who have employed a desaturate 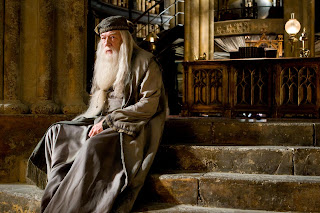 d colour palette to communicate the rising bleakness in the Potter-verse. While there are splashes of lustrously warm yellows, scarlet reds and forest greens, the world feels mired in a haze of smoky greys and blacks, and stark whites which reach into oblivion. For the first time we feel the far-reaching effects Voldemort’s sinister influence bleeding through the theatre screen.
There is an enhanced sense of artistic craftsmanship to the special effects this go-around, with nary an example of unnecessary CG

tinkering. It all feels vital to the story and there are sights to become lost in, such as a damp subterranean cavern, featuring zombie-like spectres of death and a suffocating watery abyss, which is a sublime vision of apocalyptic beauty, as well as the expansive rolling hills of Hogwarts, glimpsed from the highest parapets. Even the smaller moments, as when a heartbroken Hermione sits on a lonely staircase, watched over by shimmering birds, delight the senses with their honesty and expressive creative invention. When Harry, late in the film, reflectively confesses that “I’m just beginning to realize how beautiful this place is”, we nod in agreement.
Yates stretches his sumptuous marvels over a luxuriously paced story, which isn’t afraid to take the time for witty character-driven comedy (Half-Blood Prince is oft 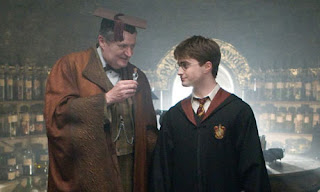 en very funny) and enlightening dramatic touches aimed at enriching the brilliantly drawn cast of personalities. Michael Gambon reveals new layers of resourcefulness and conflict as Dumbledore, while Jim Broadbent, as Slughorn, captures a sense of dignified pain, masked behind an exterior of eccentric buffoonery, which is the sort of performance worthy of awards recognition. The director even infuses the film`s viscerally thrilling moments, a late-night pursuit through an immense, engulfing field of vegetation, or a brutal lavatory-set wand battle between Harry and Draco, to name a couple, with a sense of character and emotional truth which is sadly all-too-rare in blockbuster entertainment.
For the first time in a long while, Harry Potter’s movie adventures feel fresh and bursting with promise 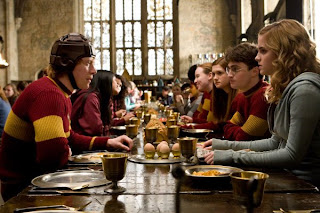 – a good sign for Yates’ two-part Deathly Hallows wrap-up arriving in 2010 – and I find myself uncharacteristically awaiting the next chapter with bated breath. The Half-Blood Prince is a spectacular tribute to J.K. Rowling`s visionary genius, a film to enchant the young and old alike, and a work of pure, uncompromised imagination. Indeed, this is magic of the highest cinematic order.
4.5 out of 5
*Originally printed SFU's The Peak: July 20th, 2009
Posted by Cam Smith at 5:47 PM