Film Review - THE TAKING OF PELHAM 1 2 3: Hyperkinetic Scott Keeps The Train From Derailing. 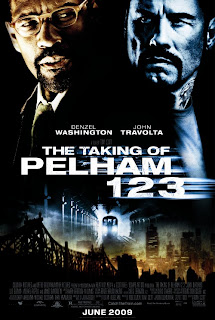 God bless Tony Scott. At 65 years of age, Ridley’s little brother is still out there, blowing expensive cars to hell and back, over-editing himself into a foaming frenzy, and kicking shallow young upstarts like Michael Bay in the ass and reminding them that, long before they were taking credit for the modern-day ADHD action explode-ation flick, he was making magnificently stupid audience pleasers like Top Gun, Days of Thunder and The Last Boyscout. Call him superficial and ham-fisted if you must, but you gotta give props to arguably the hippest movie-making grandpa out there who, with The Taking of Pelham 1 2 3, continues his cheerful trend of fashioning energetic MTV-esque bursts of empty-calorie amusement. 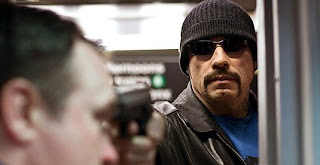 is a sign of how much more EXTREME! it is, I suppose), the premise of the flick is refreshing in its simplicity: A violent crook named Ryder (John Travolta), along with his one-dimensional accomplices, takes a New York subway passenger train hostage and demand 10 million dollars within an hour. However, the twist is that the only person Ryder is willing to communicate with is a shlumpy subway dispatcher named Walter Garber (a dependably sturdy and convincing Denzel Washington – Tony Scott’s longtime go-to guy), who is facing his own crisis, having been recently demoted from the big leagues for alleged bribery. As casualties mount, time ticks down, and the Mayor (James Gandolfini) and an NYPD hostage negotiator (John Turturro) get involved, Garber and Ryder find themselves locked in a collision-course battle of the wits where the stakes are... Well, you know. And it doesn’t take Vulcan mind meld skills to deduce how it all wraps up, either.
At any rate, before even attempting to dissect the ludicrous plot of Pelham, it seems vital to acknowledge the film’s villain. Cracklingly portrayed by a flamboyantly garish biker-gear clad Travolta, Ryder – who could easily be the actor’s Wild Hogs character after a nasty prison stint – is a memora 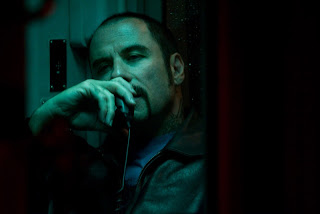 ble cartoon pop psychopath who shrieks hilariously awkward threats (“Lick my bunghole, [expletive removed]!” - An ill-advised Beavis and Butt-head homage, perhaps?) and seems to occupy an entirely different wacky plane of existence than his reserved co-stars. While I don’t for a second buy the intricacies of his grand plot, which feels too small-scale for the results it achieves, or the psychological reasoning behind his transformation into a metrosexual Marlboro Man, it’s a treat to watch Travolta recapture and revel in the unique brand of ultra cranked-up lunacy he perfected over a decade ago in Face/Off and Broken Arrow.
Likely rushed to meet the WGA strike deadlines, Oscar-winning scribe Brian Helgeland’s script is often as chaotic as Scott’s pyrotechnics, haphazardly introducing numerous e 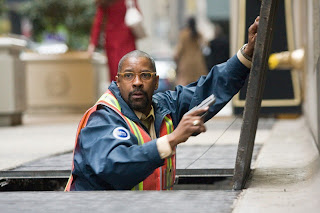 lements that go nowhere. A teenage transit-rider has a hidden video-chat connection which his girlfriend which, after the hostage crisis begins, gets picked up by the media. However, instead of using this covert insight to their advantage to uncover the identities of the hijackers, Garber and the NYPD - who are portrayed as being so farcically inept that they should sue for defamation of character - almost completely ignore it. Similarly, in a clumsy 9/11-inspired moment, two passengers decide that they “have to do something!”, and then don’t. And the film’s last act defies all reason; putting Washington into a heroic situation which seems tacked on solely to provide the requisite one-on-one confrontation required by all contemporary action films.
But if logic is truly bedamned, crazy ol’ man director Scott almost succeeds in burying the head-scratching absurdities under a veritable junkpile of rapid-fire editing trickery, pulsating techno-beats and Tasmanian Devil-like camera work. Many critics have taken issue with Pelham’s stylistic tics, however

it’s hard to argue that they don’t give the film, which slackens when it doesn’t have Washington and Travolta’s kinetic verbal jousts to propel it, serious momentum. Subtitles counting down to Ryder’s deadline slam onto the screen, accompanied by jolting synth-effects, with the subtlety of an Optimus Prime uppercut, while the camera spins around the actors like a hurricane, giving even the most mundane exchanges at least the illusion of electrical charge. They’re cheap tricks for sure, but employed with a confident professional’s eye and instinct.
The Taking of Pelham 1 2 3 is a slick, unpretentious summer-time star-veh 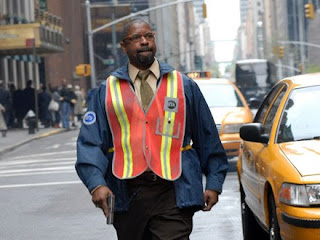 icle that has all the lasting power of a piece of Bazooka Joe bubble-gum. It knows exactly what it is, what it hopes to achieve and why an audience would check it out. While the cynical side of me takes issue with its trivial aims, I must confess that I was entertained by the nonsense of it all. Pelham shows that, twenty plus years after Maverick took flight, Tony Scott is still merrily barrelling down the track.
3 out of 5
Posted by Cam Smith at 4:48 PM