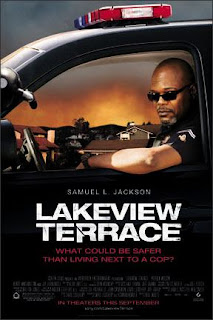 Call me crazy, but nobody plays frustrated emasculation like Patrick Wilson. Over the past few years, he has been steadily gathering a stable of hopelessly ineffectual middle-class guys who are backed into a corner by dominant opposing forces. The suburban husband arrested development case in the astonishing Little Children, overshadowed by successful wife Jennifer Connelly and paralyzingly reluctant about stepping into the adult world. The smirky pedophile unwittingly trapped in would-be victim Ellen Page’s sinister mind-games in the squirm-inducing Hard Candy. And 2009 will see him, in perhaps the penultimate Wilson role, as the impotent crime-fighter Night Owl in the eagerly anticipated adaptation of Alan Moore’s Watchmen.

So try to understand my enjoyment in watching the future star’s misery this time around, being metaphorically (and sometimes literally) slapped around the screen by that un 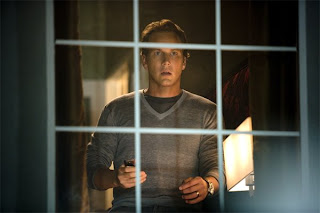 conquerable figure of alpha-maleness, Samuel L. Jackson, in the semi-successful new thriller, Lakeview Terrace.
Set in an upper-middle class suburban neighborhood in forest-fire plagued L.A., Lakeview Terrace features Sam Jackson as Abel Turner, a hard-edged police officer who runs the streets, as well as his single-parent household, with a combustible mix of intimidation and fierce vigilance. An ever-present watchdog over his proud neighborhood, Turner is none-to-pleased when inter-racial married couple Chris and Lisa Mattson (Wilson and Kerry Washington) move in next door. Beneath a subtle veil of hostility, Turner begins making things uncomfortable for the new homeowners with everythin 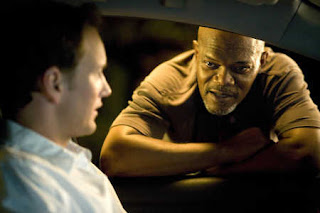 g from subtle annoyances (parking tickets, intrusive security lights and disparaging racial comments) to vicious verbal attacks and homicidal behavior.
…But then, we’ve all been around this block a few times before. Perhaps titles like Strangers On A Train, Unlawful Entry, Single White Female or The Hand That Rocks The Cradle pop into our heads, clueing us into the fact that we’ve once again entered the ol’ “Psycho Stalker” genre, in which decent people are endlessly tormented by an unstoppable force of menace.
At the very least, screenwriters David Loughery and Howard Korder have mixed things up a bit by honing on the subject of racial prejudice, and in Abel Turner they’ve created 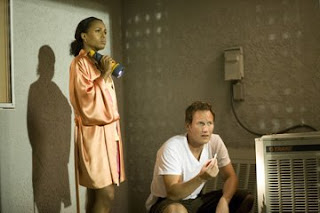 an interesting antagonist. Turner is furious over white America’s adoption and subsequent perversions of African-American culture, tired of seeing people like Chris Mattson sleepwalk their way into prosperity while he risks his life on a daily basis and, most of all, he’s resentful of his own place in society. Jackson is most fascinating when he lets his self-loathing seep to the surface like vitriolic ooze, especially in an alcohol-fueled bar-stool confessional, or engaged in a tense breakfast table stand-off with his two young children. His hurt is palpable, occasionally even truthful, and he poses some interesting moral questions.
Patrick Wilson is his perfect counterpart, a liberal yuppie, who often seems almost childlike in his inab 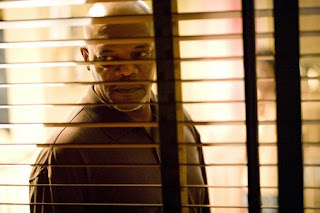 ility to deal with the crises around him. His inability to deal with his wife’s desire to start a family or her over-bearing father (Ron Glass, masterfully imposing in his two short scenes) feed into his venomous conflict with Abel, who knows exactly how to tear down his confidence.
Director Neil LaBute, who previously made the ultimate filmic statement on monstrous male egos with In The Company of Men, understands that these two dueling lions are Lakeview’s core (Indeed, Kerry Washington’s Lisa is mostly relegated to whining and looking angry/hurt, minus a few edgy moments with Jackson), and for the most part he just lets them circle each other. It’s only in the latter third of the film, when the thriller aspects get amped up to ludicrous heights, that we’re reminded that LaBute also gave us The Wi 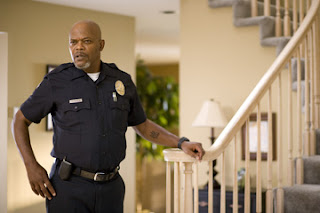 cker Man, my most oft-cited film of late. The film’s tumultuous fist-and-firearm show-down, as well as a ridiculous shot of a character in a Christ-like pose, deflate the film’s tension and honest intentions.
As far as suspense films go, Lakeview Terrace does its job and manages to sneak in a few surprise punches. It’s somewhat refreshing to attend a mainstream star vehicle that manages to inject some interesting moral conundrums and social criticism and not appear too simple-minded or patronizing.
S

till, it would be nice, just once, to see a “Psycho Stalker” film that doesn’t end with battered sweaty people screaming at one another to “put the gun down”?
3.5 out of 5
*Originally printed in SFU's The Peak: Sept 29, 2008.
Posted by Cam Smith at 7:15 PM