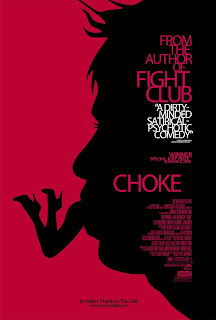 I’ve met many on-screen weirdoes in my time, but Victor Mancini is a true original. Get this: Victor, as portrayed by Sam Rockwell, is an unremitting sex addict, gawking lasciviously at any woman within 100 yards, who’s infamous at his mother’s psychiatric hospital for boffing every nurse and orderly on the payroll. Sure he realizes he has a problem, and does attend group therapy, but usually either jokes his way through them with his best friend, a chronic masturbator named Denny (Brad William Henke) or by rolling around the bathroom floor with the equally licentious Nico (Paz de la Huerta).
He’s also got serious mommy issues, doting on his dementia-addled mother Ida (Angelica Huston), a cruel f 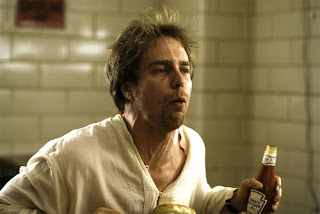 ormer criminal, who has screwed poor Victor up so badly that the only way he can feel nurtured is to make himself choke on food at restaurants and have strangers save his life.
Oh, did I mention that he works as a “historical interpreter” (aka lowly jackass in a silly wig and costume) at a colonial theme park/tourist trap, where he relentlessly hits on his standoffish co-worker Ursula (Bijou Phillips), and takes cruel joy in infuriating his pompous boss (the film’s director, Clark Gregg).
Yep, he’s a character all right, and the film about his misadventures, titled simply Choke, is one of the most quirky and entertainingly original comedies to come down the twisted pike in eons.
Based on the novel by disturbed author Chuck Palahniuk (who also wrote Fight Club), Choke is the su 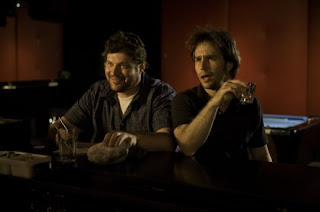 rprisingly affecting tale of a pathetic wretch who searches for meaning in his life. His emotional journey leads him to a number of avenues: learning the truth behind his crazily dysfunctional upbringing, beginning an awkward courtship with Paige (Kelly Macdonald), a new doctor at his mom’s hospital, and by finally making peace with his own depressions and admitting his (many) problems.
But plot isn’t imperative here. Choke is, at its filthy little heart, a hysterical character study that should, lord Xenu willing, finally launch the sleaze-tastic star that is Sam Rockwell. Rockwell, that ace character actor who’s been kicking around Hollywood for almost two decades working in films of varying quality (including Matchstick Men, Charlie’s Angels, Galaxy Quest and Confessions Of A Dangerous 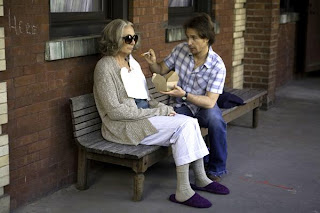 Mind), has finally found his ideal role and he owns it every sinful second he’s on screen. With his tousled, lightly greying mop and peculiarly otter-like appearance, he works wonders in making the audience love a man who sexually harasses senior citizens and launches snarky verbal projectiles at everyone around him.
First time helmer Gregg (who also adapted the film), is best known as co-star of TV’s The New Adventures of Old Christine, and was recently seen in theatres being bashed by a metal behemoth in Iron Man, doesn’t have much of a visual sense (he’s more from the bland point-and-shot school of directorial thought), but he shows a remarkable talent for staging comedy and drawing the best from his cast of off-beat talent.
He especially knows how to use Angelica Huston to full effect. Done up like a Goth Carmen Sandiego 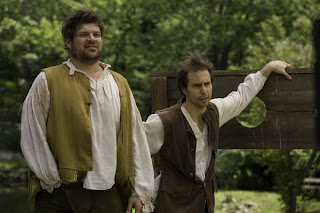 in flashbacks, the veteran actress goes crackers creating one of the most pathologically wounding parental figures since Gene Hackman worked his own emotionally-stunted magic in The Royal Tenenbaums. No one can say “It’s late! We have to make the state line”, with the chilly authority she can. As well, her work in the present, as a rapidly fading invalid is bravely unsentimental and lacking in vanity.
The other power-player here is Kelly Macdonald, the adorable Scottish actress best known for losing a coin toss in No Country For Old Men, who takes a very tricky pivotal role and really brings a surplus of warmth to it. The fact that she can make the audience believe that Sam Rockwell is endearing is incontestable evidence of her talents.
Gregg’s script is slickly written, and filled with raucously lewd comedic moments. One scene, which had a dozen battle-hardened film critics cackling, features Vincent hooking up with a 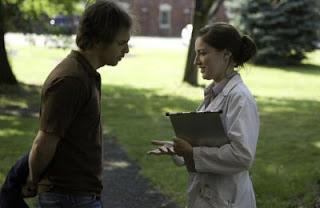 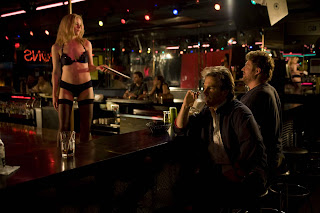 eamiest of dwellers. So imagine my pleasant surprise at discovering one of the most lovable films of the year, an off-beat triumph with a crackerjack lead performance and full dedication towards delivering a unique comedic vision. For a film over-flowing with acidic wit, bizarre fetishes and mislaid sex toys, Choke sure goes down smooth.
4 out of 5
*Originally printed in SFU's The Peak: Sept. 29, 2008
Posted by Cam Smith at 8:11 PM