"Dragon" The Deceased Back To The Silver Screen!

Hmmm... We got ourselves another slow news day. With that said, I did come across a small piece of info that I think is worth commenting on. It seems, according to Production Weekly, that director Rob Cohen has signed on to direct a new film called Rage & Fury. Now, that bit of news would generally be ignored (I'll get to my Cohen-bashing in a bit), were it not for the announced star of the film. Who would that be? Well, it's the fellow you see pictured above. Yes, Mr. Bruce Lee is apparently coming back to the big screen, directed by the mastermind behind XXX, Fast & The Furious and Stealth! Yeesh.

Now, I'm not just annoyed that Bruce Lee's being guided from the grave to the cinema by the man who has, at every turn, produced mediocre-to-crappy films. No, what I find extremely tiring is this popular trend of resurrecting long dead actors and putting them in films or commercials which, had they been alive, they would have seriously distanced themselves from. It used to be that when actors died, their filmographys were closed. Not the case anymore! God bless CGI!

The whole darn thing started a few years back. I don't know how many of you recall the infamous Diet Coke ad featuring Gene Kelly? It may 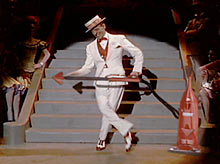 have raised some ire, but nowhere near as much as the 1996 Fred Astaire Super Bowl commercial... The one where they altered footage from Royal Wedding to make it appear that Mr. Astaire was cutting the rug with a Dirt Devil vacuum? It was quite controversial at the time, raising great fury from a large number of film fans. Interestingly, sales on Dirt Devil's fell following the airing of the advertisement. You would think that would cause advertisers to realize the trend was a bad idea; however we would then be overestimating the intelligence of corporate advertising teams. No, the future brought us Lucille Ball shilling for Service Merchandise and Marilyn Monroe hawking cosmetics, just to name a few. Recently, Audrey Hepburn started dancing in Gap ads. It didn't stop in the ads though; soon they were popping up in films too!

ago there was a pretty forgettable movie called Sky Captain And The World Of Tomorrow. Visually, it was amazing. Story-wise, it was a big ol' bore. It starred Jude Law, Gwyneth Paltrow, Angelina Jolie and er... Sir Laurence Olivier. Yes, Mr. Olivier (left) decided (Well actually the guardians of his image decided) that the role of the maniacal Totenkopf would fit nicely into his already amazing filmography. It's too impressive to note two or three examples, so check it out at: http://www.imdb.com/name/nm0000059/. What was supposed to be the big surprise of the movie was instead more of a "what the hell is this?" moment. The whole thing was done rather poorly, using CG-manipulated archival footage, showing Olivier on a blurry computer screen speaking lines that sounded strangely disconnected to each other. His forced participation in the film had no impact and made little sense.

Now, there is a grey area to this whole ridiculous trend. Nobody (including myself) was enraged by Marlon Brando reprising his role as Kal-el in Superman Returns, or a whole slew of people popping up in Forrest Gump. In my own opinion, what made these scenes acceptable was the fact that it didn't pervert the celebrity's images or force them into new roles in which they have little say. Brando's scenes were simply outtakes from his initial appearance in 1978's Superman: The Movie. They were respectful to the the original work and didn't alter the performance to fit something new. The same goes for the scenes with Forrest Gump. The celebrities were shown great respect and didn't have their images tarnished.

Now this brings us to Mr. Lee's role in Rob Cohen's future opus. Bruce Lee has never played the role that he will be portraying. They will be using technology to force a performance

out of an actor no longer able to display proper emotions. It's creepy and strange. It also shows little respect from Lee's family. In an attempt for a cash grab they're dishonoring Lee's right to be left to rest. Now, I realize that Cohen (right) has an in with the family. He directed the acceptable biopic Dragon: The Bruce Lee Story back in '93. It was decent, though took pretty serious liberties with the man's life (I doubt Lee fought as many ancient demons in real life...). So, I understand the family's willingness to trust him. That said, Cohen has proven himself to be a technically proficient hack. A director who can make films that look good, but are hollow exercises in shallow action. His biggest contribution to the industry has been making Paul Walker and Vin Diesel famous. Now, I've enjoyed some of Diesel and Walker's films, but they ain't exactly De Niro and Pacino... Closer to Lundgren and Guttenberg actually... (Come to think of it, what happened to Steve Guttenberg? I've always considered Short Circuit to be an underrated gem... "Johnny 5 is alive!") Anyways, back to Cohen. Now, certain director's may have the tact and talent to use some form of a Bruce Lee recreation (I'm not saying they should, mind you!), but this clown ain't one of them. Has the Lee family watched Stealth? Or what about The Skulls (Which co-starred Walker)? Yeegads!

I'm still going to consider Bruce Lee's final film to be Game Of Death. I don't care what perversion Cohen and his monkey-boys cook up in the lab; it won't be Lee in Rage & Fury. No, it'll merely be a special-effects creation on the same level as Dobby, Gollem, or Jar Jar Binks. It may look and sound the same, but the soul of the man is long gone and no empty effects exercise can fill in.

Oh, hey! Speaking of stupid ideas... News is swirling around the net that Naomi Watts (Mulholland Drive, King Kong) is circling the proposed Michael Bay-produced The Birds remake. Now, I'm not going to rant about how lousy a project this is (Michael Bay has yet to produce a decent movie), rather I'm going to plead with Ms. Watt's to reconsider. It's never really a good idea to remake a classic. Sure, King Kong worked out allright, but that was Peter Jackson. This is Michael Bay... And trust me; they won't be getting a brilliant director attached to this. Plus, you don't want to attempt to recreate Hitchcock. Remember Gus Van Sant's Psycho remake? So, come on Naomi, crawl out of this potential cinematic sludge-pool and find another 21 Grams or Mulholland Drive. And if you really are that desperate to be in a mainstream thriller, stay away from Michael Bay! Stay away from Rob Cohen too! Get someone like Chris Nolan (Memento, Batman Begins) or Sam Raimi (A Simple Plan, Spider-Man series) on the phone.

Mother of Pearl! You don't see many days with news as moronic as the above stories. I hope something big happens with Spiderman 3 or Iron Man in the near future cuz I'm tired of complaining...

Go out and rent a Guttenberg film and bring about some sort of Guttenberg resurgence. Maybe then I'll get my Short Circuit 3... Oh, Johnny 5, you card, you!

Hey Laserlips! Your mama was a snowblower.