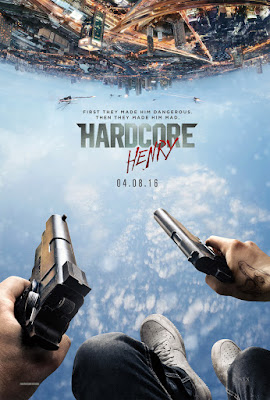 Hardcore Henry is a relentless and obscene assault on the senses disguised as a motion picture. Aspiring to be no more than a ninety minute onslaught of blood, guts, fire, bullets and ballistics, Russian music video director Ilya Naishuller’s exhausting, punishing debut is the most literal cinematic replication of ultraviolent first-person shooter video game aesthetics ever conceived. It’s also a virtuoso marvel of technique and directorial control, albeit one that leaves you reaching for headache meds when it’s over.

Set at an undetermined point in the not-so-distant future, Hardcore Henry opens with the title character being awoken by his scientist wife Estelle (Haley Bennett, who bears a jarring resemblance to Jennifer Lawrence) from a comatose state. Hooked up to machines, mute, without any memory and missing multiple limbs, our hero is speedily outfitted with synthetic replacement parts and brought up to speed. He was once a soldier, but has been transformed post-mortem into a high-tech killing machine. However, before he’s even able to receive his new electronic voice, the lab is crashed by Akan (Danila Kozlovsky), a telekinetic psychopath with a blond emo haircut, who quickly absconds away with our confused protagonist’s beloved. Hell-bent to get her back, Henry must mow his way through an endless (extremely heavy emphasis on that word) assortment of armed goons using every deadly weapon at his disposal, with aid coming only from a mysterious ally named Jimmy (Sharlto Copley), who has secret information to share and a very nasty habit of dying hard and often. 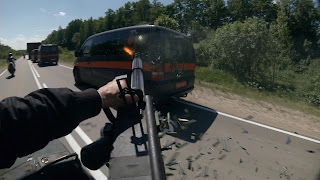 To his great credit, director Naishuller, who gained international attention for his popular POV music video “Biting Nails: Bad Mother****er,” is not only 100-percent committed to his visual storytelling gimmick, but also astonishingly skilled at realizing it. Employing an army of seemingly reckless stunt men, he stages his countless chaotic action sequences with explosive aplomb, never losing track of the geography of the scene or leaving the audience disoriented. While perhaps a questionable artistic aim, this is likely as close to capturing the “you are here” virtual reality feel of a particularly ferocious first person shooter game as any filmmaker can ever dare dream. Remember that brief much-celebrated POV bit in 2005’s cruddy Doom adaptation? That was a glitch-ridden beta test compared to this sleekly-tooled flick. As the camera whips around like a whirling dervish, Henry’s tattooed gun-toting hands visible at the bottom of the screen, we act as both observers and simulated players, steering the lead mercilessly through his gauntlet of carnage.

There’s zero doubt gamers will greatly appreciate the movie's slavish dedication to their preferred medium (especially given the endless horror parade of unwatchable video game flicks to date), and the film warrants commendation for never condescending to this niche audience. But what about non-gamers just interested in a fun time at the theater? To be honest, Hardcore Henry probably won’t work out so well for them, as it refuses to make any concessions for those yearning for a little story or an interesting character or two within its whirling cesspool of gore, brutality and rampant, mean-spirited misogyny.

Hardcore Henry is, in many ways, the logical continuation of what maverick directorial duo Neveldine/Taylor pioneered with their go for broke Crank entries and Gamer. However, those films showed at least a modicum of interest in plotting and character, no matter how scattered or silly. Naishuller’s vicious blast-o-rama, on the flip side, is just an extremely long action scene broken up by sporadic connect-the-dot exposition bursts that amount to pretty much zilch anyway. My friend Tony would call this an 'And Then' movie, because the entire narrative can be accurately summed up by a hyper-active child yelling “And then [blank] happened, and then [blank], and then [blank], and then [blank]…,” ad nauseum.

Since we never remotely care at all about anyone of anything that’s happening on-screen, it’s nearly impossible to maintain any sort of interest or enthusiasm by the time we get to the hundredth decimated generic enemy. And whereas the two Cranks were at least grounded by an amusing central performance by Jason Statham, Hardcore Henry lacks a strong magnetic personality to anchor the madness. Copley is ostensibly there to perform that task, yet Jimmy’s many incarnations are so frenzied and over-mannered that they often manage to out-loco the madness around them. At least the District 9 actor is having a grand old time with his one-dimensional role (especially in a jaw-dropping late-second act scene that no one will see coming), even if he does spend far, far too much time hysterically screaming incoherent nonsense into the camera.

No doubt you already knew a few paragraphs ago whether this one was for you or not. Well, that’s just the kind of movie Hardcore Henry is; you’re either on board to experience its concussive Molotov cocktail of tasteless sadism and mayhem, or you’re not. As a technical experiment, Naishuller’s accomplished spectacle is at least an intriguing and dazzling exercise in superficial style, even if it fast becomes a tedious endurance test to finish. Hopefully the talented young helmer’s next film sees him melding his skill for eye-popping images with a decent narrative backbone, as maybe then all the splatter might actually, you know, matter.